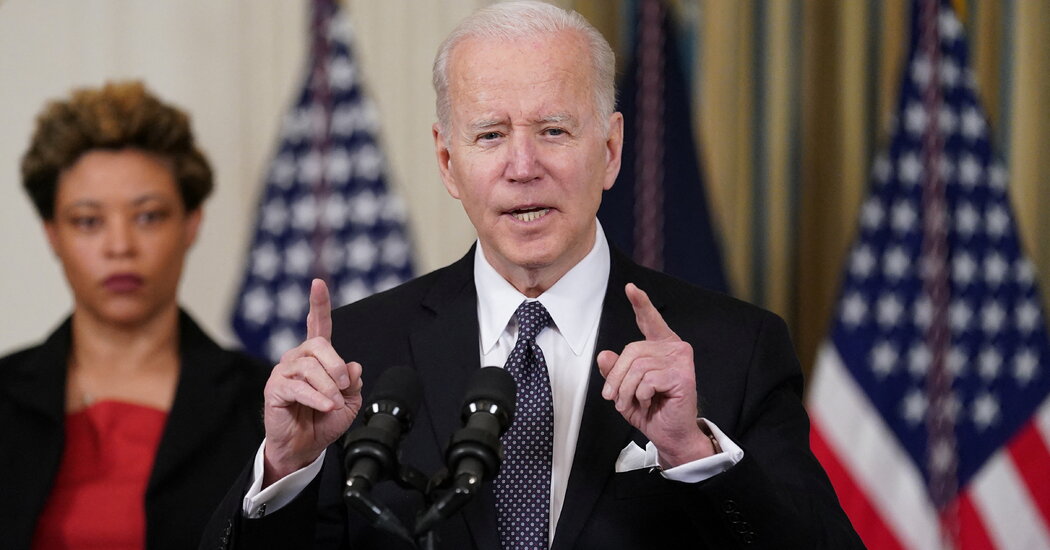 President Biden proposed a $5.8 trillion annual budget yesterday, a request that reflects growing security and economic concerns at home and abroad. There are billions set aside to invest in police departments and the military, paid for in part by higher taxes on corporations and the wealthy.

For Congress, the release of the budget, a largely symbolic document, is seen as little more than a suggestion from the other end of Pennsylvania Avenue. Still, it is an important accounting of the administration’s priorities, most notably that Biden appears to be focusing on smaller policy specifics instead of on the sweeping changes in his Build Back Better bill, which he has spent much of his time in office promoting but which was relegated to a footnote in the budget document.

If you don’t have time to comb through all 149 pages, here’s what you need to know about the budget:

Congressional responses to the budget largely fell along party lines. Democrats praised the emphasis on reducing the budget deficit. Republicans scoffed at proposed tax increases and warned that the proposals would do little to tame inflation. The president said his budget served a “bipartisan unity agenda.” And so begins another round of the arduous process of funding the government, which has become so fraught that the current fiscal year’s budget was approved only this month, too late to include as a basis for comparison for yesterday’s proposal for the next fiscal year.

FedEx’s founder is stepping down as C.E.O. Fred Smith, who came up with the idea for the shipping company while an undergrad at Yale 57 years ago, will stay on as chairman. He’ll be succeeded as chief executive by Raj Subramaniam, FedEx’s C.O.O.

Tesla plans a stock split for a second time in two years. Shares in the electric carmaker jumped 8 percent after the company disclosed its plans, which would reduce the price of individual shares. (They closed yesterday at $1,091.) Meanwhile, Elon Musk tweeted that he has Covid again.

Disney condemns the enactment of Florida’s “Don’t Say Gay” law. The entertainment giant quickly issued its statement after Gov. Ron DeSantis, a Republican, signed the anti-L.G.B.T.Q. bill into law yesterday. It’s the latest effort by Disney to take a public stand against the legislation after employees criticized it for staying quiet as the bill took shape.

Apple reportedly plans to cut production of iPhones and AirPods. The tech giant has told suppliers that it will order fewer low-end iPhone SE and AirPods because of weaker consumer demand, according to Nikkei Asia.

A big proxy adviser urges Discovery investors to reject their C.E.O.’s payday. I.S.S. criticized a compensation package for David Zaslav worth $247 million as “excessive,” and pointed to Discovery’s “long history of poor pay practices.” But much of Discovery’s voting stock is controlled by the billionaire John Malone, a Zaslav ally.

The latest in the Russia-Ukraine war:

Walmart is halting sales of cigarettes in some stores in some states, highlighting the pressure on retailers with pharmacies to stop selling tobacco.

A Walmart spokeswoman confirmed the move, reported earlier by The Wall Street Journal, and said that the number of stores involved was “relatively small.” The decision was based on the same criteria applied in the evaluation of any product sold by the nation’s largest retailer. “We are always looking at ways to meet our customers’ needs while still operating an efficient business,” the spokeswoman said.

“Retailers who deliver pharmacy services shouldn’t sell combustible tobacco,” Scott Gottlieb, a former F.D.A. chief, told DealBook, saying that it softens the risks of smoking “by marketing it under the veneer of their public health business lines.” In 2014, more than two dozen attorneys general urged the country’s largest retailers to stop selling tobacco products in stores that also have pharmacies. A number of cities and states now ban sales of tobacco in pharmacies. (Outside the U.S., it is rare for pharmacies to be allowed to sell tobacco products.)

Pharmacies have been pushing further into health care services, making tobacco sales more incongruous. CVS’s decision to drop cigarettes in 2014 was part of its rebrand as CVS Health (it bought the health insurer Aetna a few years later). Walgreens’s C.E.O., Roz Brewer, who is looking to health care for growth, told CNBC last year that tobacco sales were “under real scrutiny” as part of that push. Walmart, for its part, is poised to become a big health care player, too.

Shares of Altria and Philip Morris dipped on the Walmart news. Cigarette sales have mostly been falling for the past 20 years, and for Walmart, tobacco products have become less profitable than candy, in part because of regulation and theft, The Journal reported. Still, there is a cost: When Walmart restricted sales of cigarettes at some of its Sam’s Club locations in 2018, it cut 2 percent from its same-store sales growth rate.

“I think we’ve got a real problem of high underlying inflation that I don’t think will come down to anything like acceptable levels of its own accord.”

— Larry Summers, a former Treasury secretary, on “The Ezra Klein Show” discussing inflation, recession and how the Russia-Ukraine war might aggravate both.

Back in the office, not on the road

Workers are steadily returning to the office, and staying there. Corporate travel spending is a third of what it was before the pandemic, according to the latest survey by the Global Business Travel Association. Some signs suggest that business travel will never return to prepandemic levels.

McKinsey is the latest company to confirm a permanent cut in business travel. The global consulting firm recently decided to reduce its travel by 25 percent from its prepandemic level, according to a company representative. Right now, its workers are not traveling as much as they did before, but as conditions return to normal, the firm has told employees, including senior management consultants and firm leaders, to spend less time on the road.

McKinsey says that less travel will foster collaboration and team building, especially as employees return to the office. Before the pandemic, McKinsey had the ninth-biggest travel budget in corporate America, spending an estimated $265 million on U.S.-booked airfares in 2019, according to Business Travel News.

Climate pledges are another factor that could permanently reduce corporate travel, according to a report released today by IdeaWorks, a corporate travel consulting firm. The report said because corporate travel represented a large portion of professional service firms’ carbon footprints, many will not be able to meet their climate goals without a significant reduction in travel.

Jay Sorensen, the president of IdeaWorks, told DealBook that some business travel is “very durable,” but that there are “a whole lot” of other trips that were once routine but may no longer be taken. “Airlines are planning for a future in which there are fewer business travelers,” he said.