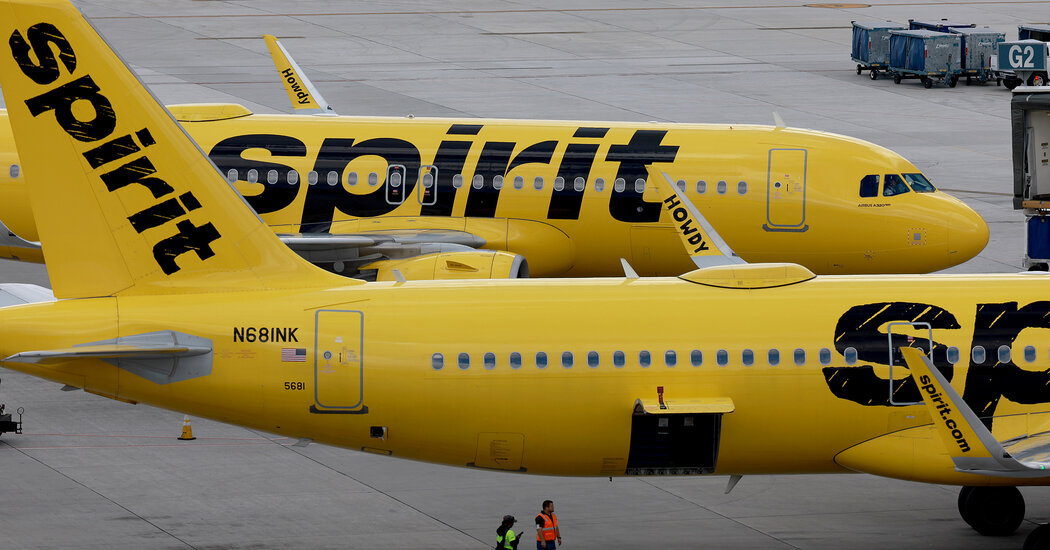 JetBlue Airways has offered to buy Spirit Airlines for $3.6 billion, throwing a wrench into Spirit’s plan to merge with Frontier Airlines and create a behemoth budget carrier.

Spirit and Frontier, both low-cost airlines, agreed in February to merge in a deal the companies said would save consumers about $1 billion a year. JetBlue offered $33 a share in cash, Spirit said on Tuesday, far more than Frontier’s cash-and-stock offer.

Frontier’s shares have fallen since it and Spirit announced their deal, reducing the value of the offer, which has an implied value of about $25 a share at current prices. Spirit said its board plans to review JetBlue’s bid and “respond in due course.” JetBlue’s chief executive, Robin Hayes, said the deal would be “a game changer,” allowing the airline to offer more quality, affordable flights.

“Customers shouldn’t have to choose between a low fare and a great experience, and JetBlue has shown it’s possible to have both,” he said in a statement.

After the news of the bid broke on Tuesday, Frontier countered that JetBlue’s prospective purchase of Spirit would limit options and harm consumers.

Either deal would be sure to face antitrust scrutiny from the Biden administration, which has taken a tough stance on mergers and partnerships. Last year, the Justice Department sued to prevent JetBlue from forming a domestic alliance with American Airlines, arguing that the agreement would drive up prices and reduce competition. The airlines rejected the premise of the lawsuit, which is ongoing, contending that the partnership would increase competition against Delta Air Lines and United Airlines and in New York airports.

And last month, several progressive lawmakers, including Senators Elizabeth Warren, Democrat of Massachusetts, and Bernie Sanders, Independent of Vermont, expressed misgivings about the proposed merger between Spirit and Frontier, warning that it could raise ticket prices and harm customer service.

But Spirit and Frontier have argued that a merger would make aviation more competitive by creating a stronger competitor to the four biggest airlines, which control about two-thirds of the domestic market. Either combination would create the nation’s fifth-largest airline by market share. JetBlue is the sixth-largest airline in the United States.

The merger between Spirit and Frontier makes sense, given their similar business models and different regional strengths, industry analysts say. Both airlines were shaped by Indigo Partners, a private equity firm that invests in what are known as “ultra-low-cost carriers” — airlines that are sharply focused on the bottom line.

A combination of Spirit and JetBlue may be less of a clear fit. Both airlines are concentrated in the Eastern United States. Spirit keeps costs and fares low by charging extra for everything from carry-on bags to seat selection. JetBlue offers more premium options and provides free in-flight perks such as name-brand snacks and wireless internet.

“The question now seems to be: What is this airline going to be?” said Kyle Potter, the executive editor of Thrifty Traveler, a flight deals website. “I don’t know that I have a good answer to that. It’s puzzling.”

But the deal has some merit, too, analysts said. JetBlue would strengthen its foothold in Florida, which has been a popular destination throughout the pandemic. The combination would also give JetBlue greater scale as it competes to take advantage of the burst in travel.

The rise of the ultra-low-cost business model has already pressured major carriers like JetBlue to introduce cheaper, limited fares, so integrating Spirit may be less difficult than it would seem, said Samuel Engel, a senior vice president and airline industry analyst at ICF, an advisory firm.

“They already created Spirit Airlines pricing on their own metal, so it seems very plausible to me that JetBlue would be able to continue to maintain two brands with different value propositions,” he said.