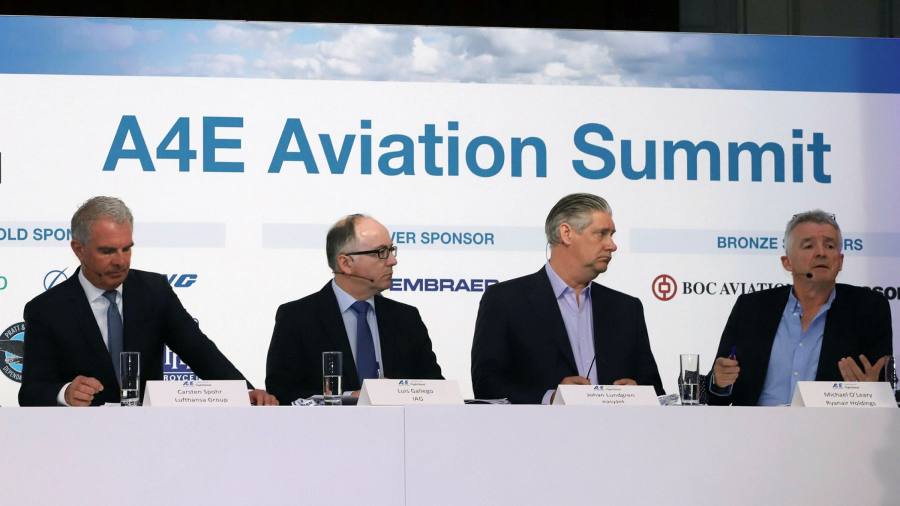 Beware the corporate lobbyist who opens a conversation with the words, policy X “is an important package . . . on whose objectives we are fully aligned.” What follows could undermine the very initiative the company claims to support.

That is how International Airlines Group, owner of British Airways, Iberia and Aer Lingus, set out its position on EU proposals for a 55 per cent reduction in the bloc’s carbon emissions by 2030. It then duly objected in detail to many of the measures.

The nine-page position paper seen by the Financial Times is one of many by different carriers and was sent in February to MEPs, who are now debating the various measures in the “Fit for 55” package launched in July.

Among the EU’s many ambitious proposals, Brussels aims to take a global lead in driving down emissions from aviation, which accounts for roughly 4 per cent of Europe’s total carbon output and substantially more of its greenhouse gases.

The Fit for 55 package would tighten the rules for aviation under the EU’s carbon-trading system by abolishing free carbon allowances, taxing aviation fuel and setting a minimum requirement for sustainable fuel used on every flight within the EU and those departing the bloc.

Not surprisingly, the aviation industry — barely out of Covid and facing the prospect of spiralling inflation — is pushing back.

This week Carsten Spohr, chief executive of Lufthansa, accused the EU of “creating a dangerous imbalance”. The proposals could force passengers on to non-EU carriers, which would be able to charge lower fares as a result.

In truth, little hard evidence suggests that this will occur. Moreover, Transport & Environment, the European climate lobby group, has studied the positions of Iata, the aviation industry’s global trade body, of IAG and Air France-KLM, and the amendments being proposed by MEPs. It found that if the industry amendments are accepted, the level of expected carbon savings from the EU’s proposals could fall by close to 40 per cent.

Exempting short-haul flights that feed passengers on to long-haul journeys would reduce the scope of Europe’s carbon trading scheme, while limiting sustainable fuel mandates to only intra-EU flights, would dramatically reduce the coverage of clean fuel mandates, T&E contends.

For example, the EU’s proposals would cover roughly 98 per cent of Iberia’s emissions, says T&E. If IAG’s amendments were accepted, this would fall to just 21 per cent. Air France would move from 90 per cent to barely 20 per cent, and Lufthansa from 99 per cent to 33 per cent.

Such actions would also disproportionately benefit a legacy carrier such as IAG, which earns a substantial proportion of its revenue from long-haul, transatlantic flights. IAG stresses that it does not oppose a sustainable fuel mandate for international flights per se — just as long as it is applied globally.

The industry is also lobbying to maintain free allowances for carbon emissions under certain conditions. But this would weaken the EU’s impact, T&E argues.

It is clear that existing emissions rationing schemes have not worked. Though aviation has been subject to the EU’s carbon trading scheme since 2012, the sector’s emissions in Europe increased by an average of 5 per cent annually between 2013 and 2018, according to the European Commission.

The aviation sector does face substantial obstacles to cleaning up its act. The technology for emissions-free flights is not yet commercially viable. Airlines must depend on suppliers to produce enough clean fuel — still in woefully short supply. Moreover, European governments have refused to reform air traffic management, which could deliver big savings.

But the industry has also been appallingly slow to move. A survey of Europe’s aviation players by air traffic management agency Eurocontrol in late 2018 revealed that almost half of respondents had not begun planning how to adapt to the effects of climate change.

Much has changed since and there is a real sense that aviation now understands the challenge. IAG, which strongly denies that its proposals undermine Fit for 55, has invested heavily in the production and purchase of sustainable aviation fuel, and was the first airline worldwide to commit to achieving net zero emissions by 2050.

Most airlines are indeed sincere about the need for change, but they should be cautious about wanting to delay the EU’s climate ambitions. The pain of transition will only amplify the longer the industry procrastinates. If anything, the current crisis over Europe’s dependence on Russian gas should be a stark reminder of the high cost of ignoring unsustainable dependencies.