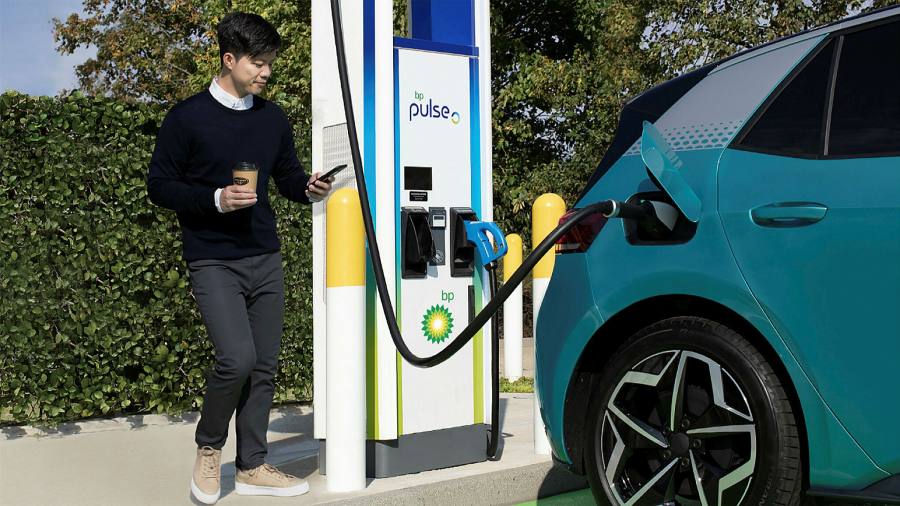 BP will this week unveil an additional £1bn for new electric car charging points in the UK, one of a number of investments the government hopes to announce alongside its long-awaited infrastructure strategy.

Ministers have been working for months on a strategy, expected to be announced on Friday, to ensure the UK has enough charging stations as cars and vans switch to electric, say three people familiar with the matter.

BP’s investment will significantly boost the number of superfast charging points in its current network of about 8,000, which are mainly located in petrol stations and motorway service areas.

BP declined to comment on the new investment and would not provide a figure for its overall spending on charging points to date across the country.

Other private sector spending pledges are expected to be unveiled alongside the plan on Friday, with several other companies still in talks with officials, according to two people familiar with the discussions.

The government will phase out the sale of new petrol and diesel vehicles by 2030, with some hybrids allowed until 2035. About 18 per cent of new cars sold last month were electric cars, according to the Society of Motor Manufacturers and Traders.

The industry has warned that more charging stations need to be installed to convince motorists to switch to battery models without fear of being stranded.

The new government strategy is expected to emphasise an existing commitment of more than £1bn from taxpayers towards improving electric vehicle infrastructure, according to two people with knowledge of the contents.

The strategy aims to address the two key areas that are holding back widespread battery car adoption.

The first is on-street charging, which will be crucial in convincing roughly 40 per cent of motorists who do not have driveways to shift to electric cars.

The second is the provision of superfast charging at remote service areas, which is essential to enable electric drivers to complete longer journeys.

The UK car industry has warned that a fixed target for the number of charging bays is needed to ensure the rollout keeps pace with electric car sales, which are growing each month as a share of overall car purchases.

Yet the plan will not include fixed targets, but instead set out a range of scenarios.

The overall number of chargers needed depends heavily on whether motorists without driveways opt for on-street charging or use charge points at existing fuel stations or in shopping centres to top up, according to two people familiar with the contents.

BP estimates that one superfast charger, which is able to give dozens of miles of range within minutes, will do the work of about 60 overnight chargers located on residential streets.