Farage lined up for €18.5mn carbon windfall despite climate scepticism 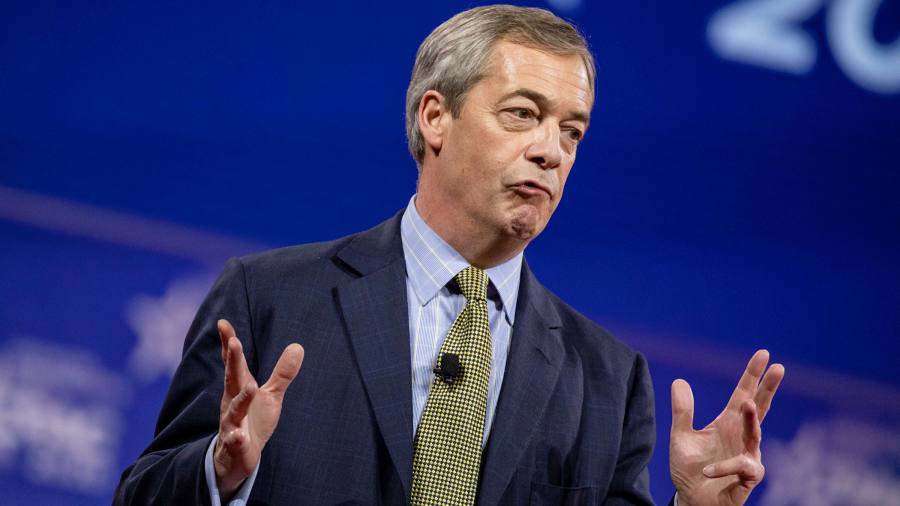 Former Brexit champion Nigel Farage is in line to gain up to €18.5mn from share options in a carbon offsetting company despite launching a new campaign opposing the government’s “net zero” 2050 target.

Farage, former leader of the UK Independence Party, announced in March 2021 that he had become chair of the advisory board to Dutch Green Business, listed on Euronext Amsterdam.

He was introduced to the company by his friend John Mappin, a pro-Putin heir to a jewellery fortune, scientologist and anti-vaxxer, who together with his wife has a 30 per cent stake in DGB, according to Bloomberg data.

Farage was granted 1mn share options at the general meeting of DGB’s shareholders in September 2021, with a “strike price” — the price he would pay for them — of €1.50.

But that same month his advisory position was put on hold owing to a dispute between the board of directors and Mappin and his wife, Irina Kudrenok-Mappin, over their shareholdings. “At the moment my relationship (with DGB) is in abeyance,” Farage told the FT.

The options can be redeemed if DGB’s share price leaps from its current €1 to €20, netting him €18.5mn, an investigation by Greenpeace’s “Unearthed” investigation unit has established. Farage played down that likelihood. “If I had a better forecast at Cheltenham last week I would have won £20mn,” he said.

DGB advises companies on how to use products such as carbon offsets to become carbon neutral. On the company’s website, Farage was quoted as saying there would be “vast amounts of money made in all of these areas over the next few years as firms are forced by legislation to offset their CO2 emissions”.

The former Ukip leader’s involvement with carbon offsets appears at odds with his reputation as a climate change sceptic. He is a senior figure in a new campaign called Vote Power Not Poverty, which is fighting the UK government’s net zero target.

In a recent Telegraph article Farage argued against “rich landowners” profiteering “in the name of saving the planet”. DGB’s website says it works with landowners who can make money from “wildlife-friendly land management”.

Farage told the FT that his anti-net zero campaign was not about global warming but focused on Britain using domestic sources of oil and gas rather than imports. “I’ve always been a conservationist, since before the Green party was born,” he said.

He added that his main concern in the UK was “about the transfer of wealth from poor to rich” through generous subsidies paid for by levies on electricity bills to landowners.

Mappin is an heir to the Mappin and Webb jewellery family. He has shared conspiracy theories about vaccines and funded rightwing political causes, including Turning Point UK, a student-focused group which supported Donald Trump.

His Twitter timeline shows multiple comments defending Vladimir Putin’s actions in Ukraine. He tweeted on February 24: “What President Putin has done is a gift for the freedom of the world. Those who love freedom have a duty to back him up.”

In September 2020 DGB announced it was “delighted” that Mappin and his wife had been appointed as chair and director of the supervisory board of the company.

But, the company said, “since then several incidents have happened and new information has surfaced, which shines a new light on the motivation for their nomination. Therefore DGB decided to retract the nomination of John Mappin and Irina Kudrenok-Mappin as non-executive board members and discontinued the appointment”.

Selwyn Duijvestijn, chief executive of DGB, said the relationship with Farage had been on hold and under review since September.

“We share a mutual passion for planting trees, but DGB disagrees with his recent comments on net zero,” he said, adding: “DGB has no relationship whatsoever with the Mappin family and does not in any way agree with their political views. We are distancing ourselves from them entirely.”

Mappin said: “Our dispute with DGB is being handled by lawyers and they have advised us not to comment at this time.”