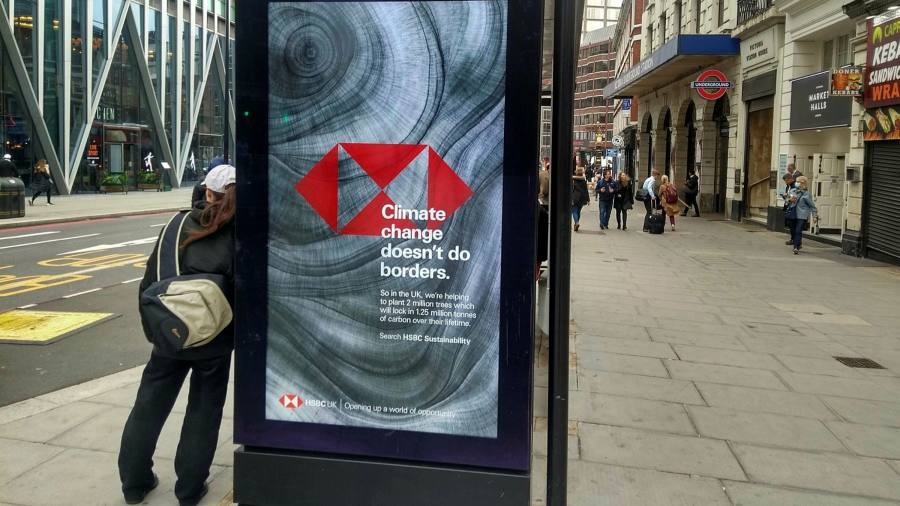 The UK advertising watchdog is preparing to warn HSBC about using adverts to greenwash its reputation and order it to be more transparent about its contribution to climate change, in a ruling that could have wide implications for financial sector marketing.

In a draft recommendation seen by the Financial Times, the Advertising Standards Authority deemed that HSBC misled customers in two adverts by selectively promoting its green initiatives, while omitting information about its continued financing of companies with substantial greenhouse gas emissions.

The adverts, which attracted 45 complaints, were published by HSBC at bus stops in Bristol and London in October last year. One said the bank would provide $1tn in financing for clients to transition to net zero, while the other pledged to plant 2mn trees to trap 1.25mn tonnes of carbon.

The ASA judged that the effect of the two adverts was to lead customers to believe that HSBC was making “a positive overall environmental contribution as a company”, which could influence their decisions on where to open a bank account, or take out a mortgage or credit card.

“We considered that consumers would not expect that HSBC . . . would also be simultaneously involved in the financing of businesses which made significant contributions to carbon dioxide and other greenhouse gas emissions, and therefore directly conflicted with the aims of a transition to net zero,” its preliminary conclusions read.

As evidence, the ASA cited information from HSBC’s annual report, which disclosed that its current financed emissions equated to 35.8mn tonnes of carbon dioxide per year for oil and gas projects alone. It also noted that HSBC will continue to finance thermal coal mining until 2040.

“We considered that meant, despite the initiatives highlighted in the ads, HSBC was continuing to significantly finance and maintain its current investments in businesses and industries that emitted notable levels of carbon dioxide,” the ASA said. “In the context of the UK and other nations . . . working towards ambitious net zero goals and targets, HSBC’s phaseout of financing in those industries was slow.”

Last September, the ASA announced it was toughening its rules on environmental claims in ads. Recent high-profile judgments have been made against smoothie maker Innocent for exaggerating the benefit of its products and Alpro almond drink for claiming it was “good for the planet”.

The ASA declined to comment on the case and emphasised that the outcome is not finalised.

HSBC said: “We have an ambitious plan to support a global transition to net zero and are acting now to reduce our financed emissions. This includes a $750bn-$1tn by 2030 financing ambition to help our customers transition, and also an explicit commitment to a 1.5°C- aligned phase down of fossil fuel financing.”

Last year, the bank was pressured on its climate commitments by a group of investors, but headed off a shareholder revolt at its annual meeting by strengthening its plans in line with international agreements to limit global warming.

However, the speed at which HSBC and other lenders have pledged to act, particularly on financing for coal power and mining, has disappointed some activists and ESG funds and they continue to push for change.

HSBC still ranks among the 10 biggest financers of fossil fuels in the world, according to the Rainforest Action Network, a charity. RAN data shows the bank has provided more than $87bn in total to some of the world’s largest fossil fuel companies since the 2016 Paris accord.