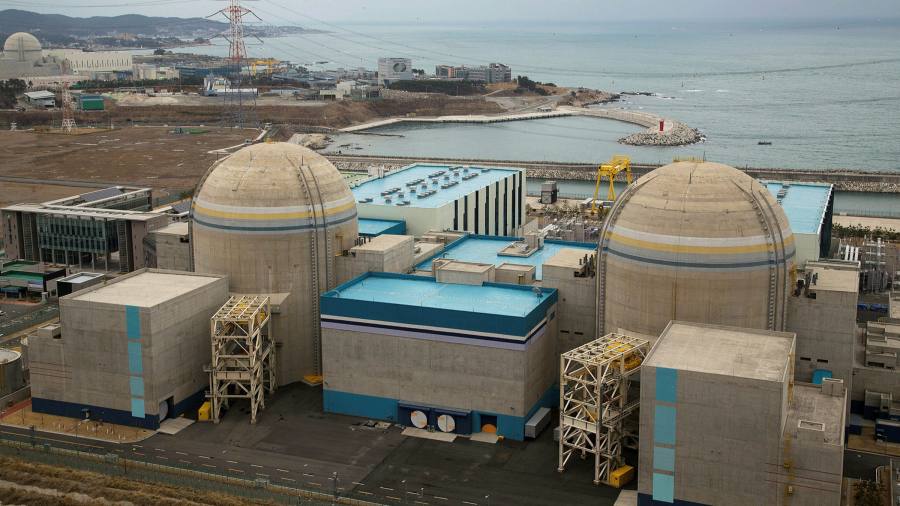 South Korea’s incoming government will reverse the country’s nuclear phaseout plan, which had been criticised for intensifying the east Asian country’s dependence on fossil fuels.

“Carbon neutrality, which the country already promised to the international community, is the path for us to take,” Won said. “But our tentative conclusion is that the Yoon administration needs to set new plans that are honest, realistic and responsible.”

Citing Russia’s invasion of Ukraine as well as the coronavirus pandemic, Won also suggested that Moon’s commitment for South Korea to achieve net carbon neutrality by 2050 could not be considered “immutable” in the face of global crises.

Kim Yong-soo, professor of nuclear engineering at Hanyang University in Seoul, said that the war in Ukraine had exposed Moon’s nuclear policy as unviable.

“Energy security and soaring energy prices have come to the fore since the Ukraine crisis,” said Kim.

South Korea is one of the world’s top-five importers of fossil fuels. According to Ember, an environmental think-tank, more than 20 per cent of the country’s coal imports in 2020 came from Russia.

Last week, an official at Korea Western Power told the Financial Times that the company had not made any additional purchases of Russian coal since the invasion of Ukraine.

“We are following existing contracts but have stopped making any new contracts with Russia because of concerns over future payments due to international sanctions,” he said.

South Korea has the highest density of nuclear reactors in the world, with most of its 24 reactors located at two complexes in the country’s industrial south-east.

In 2019, its reactors produced 139 terawatt-hours of electricity, making South Korea the fifth-largest nuclear power producer in the world. Nuclear accounted for 26 per cent of the country’s total electricity generation, according to the US Energy Information Administration.

Under Moon’s nuclear phaseout plan, construction of plants was to be suspended while older plants were to be retired, with the aim of reducing the number of operational reactors to 17 by 2034.

Korean advocates of the phaseout point to the 2011 Fukushima nuclear disaster in Japan and Germany’s decision to eliminate nuclear power entirely.

But domestic critics have pointed to the paucity of alternative energy sources.

“One of the largest obstacles is the majority state-owned utility Kepco, which has a de facto monopoly over the power sector and has vested interests in maintaining its legacy fossil fuel assets.”

In February, Yoon, who assumes office next month, noted France’s big bet on nuclear power, and the EU’s inclusion of nuclear power in its “green taxonomy” in support of his pro-nuclear policy.

“French president [Emmanuel] Macron reversed his words of ‘nuclear-phaseout’ five years ago and declared a ‘U-turn to nuclear power’,” Yoon wrote on his Facebook page during the election campaign.