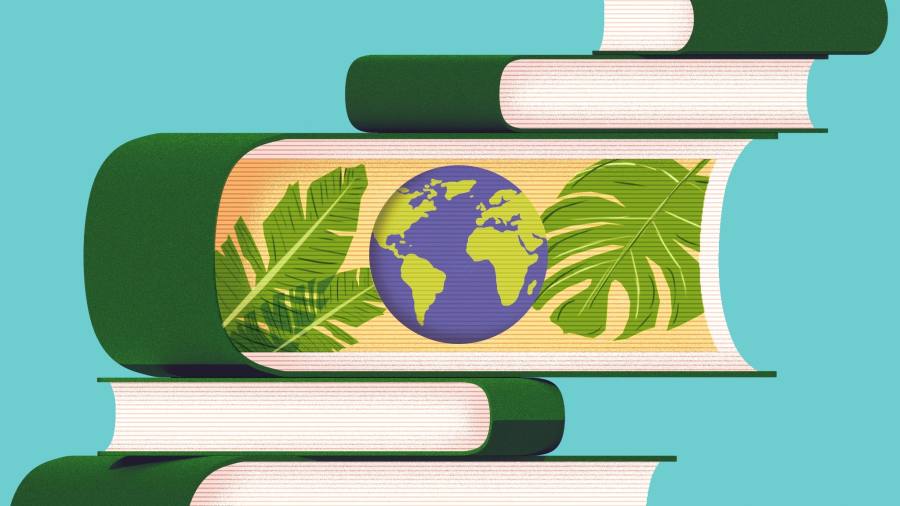 Not that long ago, anyone in a bookshop looking for something about climate change would head for the science shelves. Things have changed. As a new batch of titles shows, climate writers can now be found in all sorts of sections, from economics to sport, philosophy and children’s books.

The hunger for fast, effective policy solutions to the climate threat is deep. Fund manager Eric Lonergan and sustainability adviser Corinne Sawers go a long way to satisfying it in Supercharge Me: Net Zero Faster (Agenda Publishing £12.99/$16.95). Their short, readable book is a polite rebuke to the economists who have dominated climate policy thinking, especially those focused on the idea that the best way to fix a negative externality such as carbon pollution is to tax it.

The trouble is, carbon taxes are easy to demonise and slow to produce results. Also, carbon pricing alone may not change behaviour fast when there are no obvious alternatives to, say, petrol-fuelled cars or beef burgers.

The answer, say Lonergan and Sawers, is to relentlessly prioritise green electrification, which could cut up to 75 per cent of emissions, and use carbon taxes to complement what they call EPICs: extreme, positive incentives for change. These are measures that “supercharge” behavioural change, such as the fixed-price energy contracts in Germany that drove a global solar power boom. Weak inducements won’t do: “If a plant-based burger is only priced 3 per cent lower than a regular burger no one will change behaviour, but if it’s 30 per cent cheaper who wouldn’t give it a try?”

There is much that is epic about motor racing. The speed. The danger. The carbon-heavy fumes. But don’t write off its contribution to fixing the climate problem, says science writer Kit Chapman in Racing Green: How Motorsport Science Can Save the World (Bloomsbury £20/$21). Motorsport breakthroughs have already spurred advances in fields such as medicine, he reports. Now, they are helping to cut emissions with greener materials, technologies — and car races such as Formula E.

The championship for electric racing cars that began in 2014 has not only improved the once-oddball image of battery-powered vehicles. It has also driven engineering advances in ordinary passenger cars, such as high voltage components that car manufacturers were hesitant to try until Formula E showed they were safe, he writes.

Chapman’s evident love of motorsports can veer into overstatement. He says Formula E “saw electric cars go from an eccentric folly to the undisputed future of the automotive industry”. Elon Musk might quibble with that. The success of his Tesla electric car company is widely credited with jolting conventional carmakers to accelerate their battery-powered car roll-outs. Still, Chapman writes engagingly about the benefits motor racing has brought to a climate problem that needs all hands on the wheel.

Scientists have spent years explaining the need to cut emissions quickly. In his uncompromising book The Pivotal Generation: Why We Have a Moral Responsibility to Slow Climate Change Right Now (Princeton University Press £22/$27.95) Oxford professor and philosopher Henry Shue makes the moral case for such action.

The generation of the title is us — the unlucky humans alive today who must fix a problem they did not entirely cause to help save people they will never meet from disasters they can scarcely imagine. This poses dilemmas unlike others philosophers have confronted, writes Shue.

If humans keep modifying the climate, there is a risk of passing tipping points that launch irreversible change, such as the collapse of massive ice sheets. That would mean future people facing more difficult challenges if no action is taken now. This, Shue argues, requires today’s people to act, especially those in developed nations who reaped most of the benefits of the Industrial Revolution and let climate damage spread globally.

The path ahead is daunting, but Shue says it could also be “an exciting privilege” to be part of a generation with the chance to achieve a once-in-a-civilisation transition from dirty to clean energy. “Members of future generations will be glad that we rose to the occasion,” he writes, “and perhaps remember us proudly.”

Meanwhile, the youngest members of the pivotal generation can start early with The Tantrum that Saved the World (North Atlantic Books £15.99/$19.95), a climate picture book for children aged 5 to 9.

Climate scientist Michael E Mann and illustrator Megan Herbert have produced a new edition of their book, which stars Sophia, a girl whose life is interrupted when a polar bear and other climate refugees knock on her door. Deciding something must be done, she heads to city hall to tell officials: “I need an appointment regarding this fauna, who’ve noticed our planet’s becoming a sauna.” Alas, her complaints are dismissed. Undeterred, Sophia converts her fury into a tantrum — and kicks off a climate campaign no one can ignore.

Herbert and Mann wrote the first crowdfunded edition of their book before Greta Thunberg started sitting outside the Swedish parliament in 2018 to demand stronger climate action. The global youth climate movement Thunberg helped to create makes their title even more relevant today.