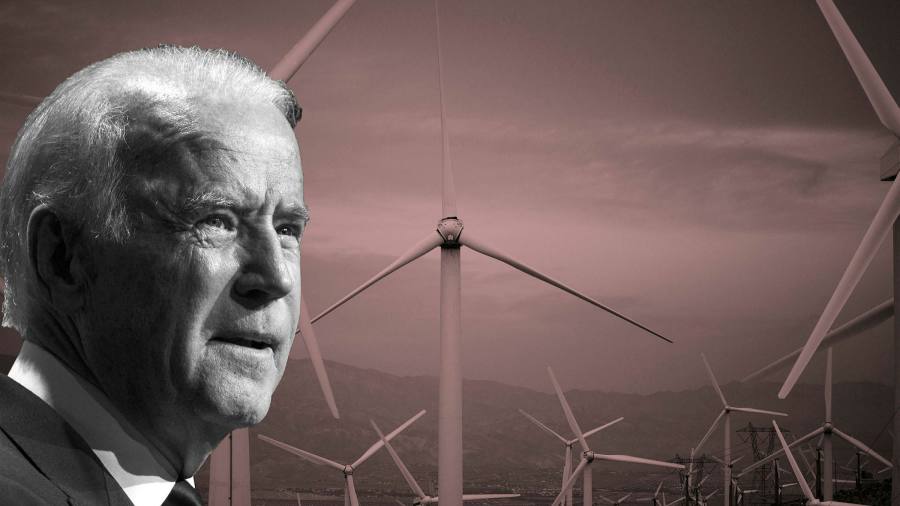 One thing to start:

Welcome back to Energy Source!

The pandemic is not done with the oil market yet. Crude prices fell sharply yesterday as the Chinese government put new lockdown measures in place in Beijing, the capital city of 22mn people, to combat a surging Covid-19 outbreak in the country. It comes after a similar move in Shanghai brought the economy there, a key global trade and financial hub, to a standstill.

Brent crude fell to as low as $100 a barrel on Monday, dropping more than $6, while US oil fell to around $96/b — both near post-Ukraine-war lows. The threat of a major supply disruption from Russia still looms over the market. But for now, crude prices are being weighed down by a combination of a weaker demand outlook and a flood of supply coming out of US and other western governments’ strategic stockpiles.

In our first item in today’s newsletter, Amanda and Myles report on increasing dismay from a key bloc of president Joe Biden’s 2020 voters: young people frustrated that the administration has failed to deliver on promises of radical government action to combat climate change. While climate action has been paralysed in Washington, renewables are still booming in many parts of the country, including the oil and gas powerhouse of Texas, I report in our second item.

Finally, Elon Musk is spending a lot his time (and money) on Twitter these days, but he probably shouldn’t spend too long away from Tesla. Traditional automakers are starting to make their push into the US electric vehicle market, Amanda reports.

Fear and loathing on climate progress

When Joe Biden entered the Oval Office last year there was a surge of optimism among activists and campaigners: after four years of environmental rollbacks, finally they had a president who would put the fight against climate change front and centre.

But 15 months later, many of Biden’s voters are still waiting for the president to deliver on his pledge. And for young people in particular — frustration has turned to anger.

“It’s hard standing so close to the White House knowing so much is not being done when there was so much that was promised,” said Carmen Bolt, a student at American University, at a “Fight for Our Future” rally in Washington this weekend. “That tension is very real.”

On entering office, Biden vowed that tackling climate change would be at the heart of his term. In his first week on the job, he signed orders recommitting the US to the Paris climate agreement, freezing new oil and gas leasing on federal lands and scrapping a permit for a major oil pipeline. He went on to commit the US to new emissions targets, won funding for climate tech in his infrastructure bill and has enacted new rules to clamp down on pollution.

But the pace of the administration’s climate action has slowed to a trickle. A gridlocked Senate failed to pass Biden’s Build Back Better bill, which would have enacted the bulk of his climate agenda. And in recent months a scramble to tackle sky-high petrol prices has led the administration to abandon many green initiatives.

Underlining the frustration, reports in recent days suggested that Gina McCarthy, Biden’s top climate adviser, was on the way out. She denied any decision on her departure had been made.

Reports that I have resigned from my position as President Biden’s National Climate Advisor are simply inaccurate. We’ve made great progress these past 14 months, but we have much more work to do — and I remain excited about the opportunities ahead.

This weekend’s rally was organised by over a dozen environmental activist groups to push for the passing of Build Back Better before Memorial Day. Addressing the crowds, administration officials insisted the White House’s climate ambition was as strong as ever.

“Let this Earth Day be a reminder to all Americans that President Biden will pull every lever, use every tool, and push every resource to tackle climate change, address environmental justice and build a better America, but Congress must act too,” said Brenda Mallory, chair of the Council on Environmental Quality.

But those levers in many instances are being pulled in the opposite direction by the president’s drive to bring down prices at the pump — which he fears will hurt his Democratic party in this year’s midterm elections.

In recent weeks the administration has thrown out seasonal restrictions on the sale of ethanol-blended petrol, restarted oil and gas leasing on federal lands and pleaded with the fossil fuel industry to open the taps.

Some younger voters at the rally said they were losing faith in the ability of the political system to tackle the climate crisis.

“I feel like I focus my efforts on other things that are unrelated to climate that I felt like I can more tangibly improve,” said Sam, a protester at the rally.

A February poll from Data for Progress found that the majority of voters ages 18-29 support ambitious actions to combat climate change, but they don’t think the president is doing enough to tackle the crisis. Forty-six per cent of respondents said they would be more likely to vote for Democrats in the midterms if they pass climate legislation in Congress.

Biden’s approval rating among young Americans dropped to 41 per cent, down 18 per cent from last year, according to a poll released yesterday. While youth turnout this year is expected to match the 2018 midterms, the percentage of voters who don’t believe their vote will make a difference has increased from 31 per cent in 2018 to 42 per cent.

“We voted in record numbers in 2020 and nothing happened to get climate action,” said Magnolia Mead, policy and legislative advocate at Zero Hour and a student at American University. “I’ve talked to a lot of youth and they don’t feel like there’s a reason to vote any more . . . [Democrats] are digging their own grave.”

Crude is at $100 a barrel and there’s a drilling boom under way in Texas, America’s oil and gas heartland. But clean energy is also surging in the state.

Wind and solar power accounted for 34 per cent of power generation in Texas in the first quarter of this year, a record high. Renewable power surpassed coal as the second-largest generator on the grid last year and could steal the top spot from natural gas in the coming years, argues a new report from the Institute for Energy Economics and Financial Analysis.

“After passing coal as a power source, Texas wind and solar now have natural gas in their sights,” wrote the report’s author Dennis Wamsted, an analyst at IEEFA.

There is still a long way to go. Natural gas accounts for more than 40 per cent of power generated in the Electricity Reliability Council of Texas (Ercot) market.

But renewables are growing fast in the state.

Roughly 35GW of wind power is already installed in Texas, much of it in the far west of the state where turbines spin alongside rigs in the Permian Basin, arguably the world’s most important oilfield. That is more than any other state in the US, and on its own, Texas has the world’s fifth-largest wind-generating capacity. Ercot says this could grow to 40GW by the end of 2023, given the projects in development. Wind typically delivers around a quarter of Texas’s power, but that surged to a record 70 per cent on April 10.

However, it is solar energy that is powering the current clean energy surge. Installed solar capacity could hit 18GW by the end of this year, more than double last year’s total. Ercot expects that to hit 26GW by the end of next year — a remarkably rapid expansion given solar power barely registered on the state’s grid five years ago.

Texas’s renewable energy boom looked to be under threat after the February 2021 winter storm that nearly crippled the state’s grid. The state’s governor Greg Abbott, widely seen as having ambitions to run for president, and other Republican leaders in the state blamed wind and solar power for the grid’s breakdown, despite studies showing disruption to gas supply and generation were at the heart of the crisis.

Ironically, Texas’s oil and gas producers are likely to welcome the greening of the Texas grid, which they will argue is making oil, gas and fuels produced in the state less carbon-intensive and more valuable in a world looking to slash emissions. (Justin Jacobs)

Traditional automakers are ramping up competition against Tesla in the electric vehicle market. Hyundai’s EV sales nearly doubled from January to February, recording the highest EV sales of any non-Tesla automaker ever, according to an analysis by Atlas Public Policy.

“Though this is just one month, it is certainly a positive sign for the EV market. The challenge now is for Hyundai and other EV makers to accelerate their growth if they’re going to catch Tesla,” said Tom Taylor, an analyst at Atlas Public Policy.