‘A profound shift’: US boosts supply of heavy weapons to Ukraine 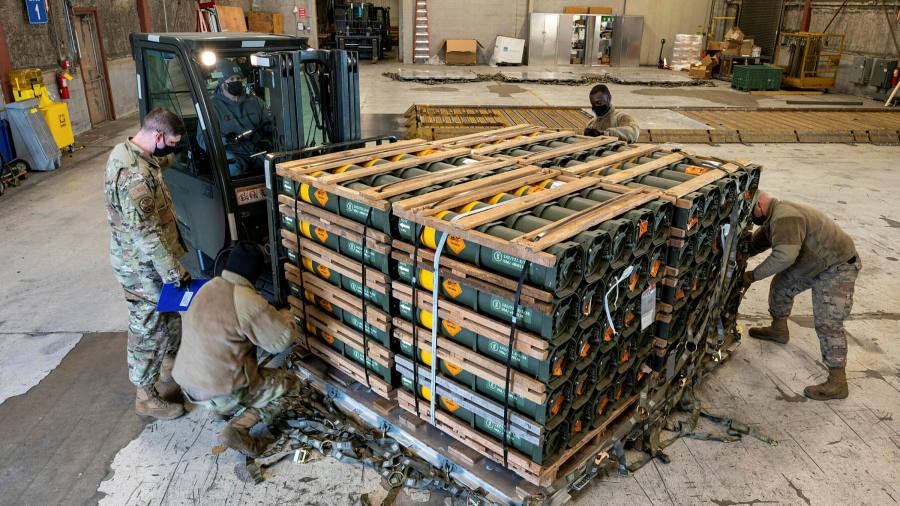 Before Russian forces began withdrawing from territory around Kyiv at the start of the month, US war policy appeared aimed at delicately threading a geopolitical needle: bolstering Ukraine’s defences without triggering a conflict between Nato and the Kremlin.

In the past two weeks, however, current and former US officials say that much of the caution of the war’s first phases has been all but discarded. Joe Biden, US president, has become far more strident in his rhetoric, accusing Vladimir Putin of “genocide” and urging the establishment of a war-crimes tribunal.

Nowhere has the shift in policy been more evident than in the weaponry the US has begun shipping to Ukrainian forces.

Just a month after opposing a Polish scheme to supply MiG-29 fighter jets to the Ukrainian air force, the White House has pivoted, facilitating the supply of spare parts to Kyiv to get 20 warplanes back in the air — and vastly expanding the range of heavy weaponry it is delivering into the fight.

Volodymyr Zelensky, Ukraine’s president, who has waged a nonstop campaign to press the US and its allies to provide more and heavier arms as the conflict intensifies, said he will meet Sunday in Ukraine with Antony Blinken, US secretary of state, and Lloyd Austin, US defence secretary. The state department and Pentagon declined to comment.

“This is an administration that was very hesitant in the not too distant past to provide equipment that would give the Ukrainians a capability that could be provocative to the Russians,” said Ian Brzezinski, who headed Nato policy at the Pentagon during the Bush administration and is now at the Atlantic Council.

Brzezinski noted that six weeks ago the administration was not providing armoured personnel carriers, long-range howitzers or helicopters. “It is a very clear and profound shift.”

Officials say the change in policy is the result of several factors, including a desire to do more to help Kyiv following evidence of atrocities in the areas Russian troops occupied before retreating from the outskirts of the Ukrainian capital.

There has also been a reassessment of the threat posed by Russia’s nuclear arsenal, a sabre that Putin rattled early in the war but one which analysts now believe he is unlikely to deploy. And the US is trying to respond to the changing needs of the Ukrainian military as it prepares to fend off a renewed assault by Moscow in the Donbas region in the east of the country.

One of the most important triggers for the shift, current and former officials say, has been the surprisingly effective performance of the Ukrainian military, which has outshone even the most optimistic expectations of military analysts inside and outside the Pentagon.

“At the beginning, the estimates were that the Ukrainian military couldn’t hold out for more than a handful of weeks,” said Chris Murphy, a Democratic senator on the Senate foreign relations committee. “If that’s your assessment, of course, the equipment you’re going to be sending is different than if you expect a war that’s going to last months and years.”

The shift is evident in the rapid pace of weapons shipments making their way from the US to Ukraine. Every day, eight to 10 cargo flights, most of them operated by the US, land near the country’s western borders, carrying hundreds of millions of dollars worth of increasingly heavy weaponry, US officials said. Defence officials describe a process whereby equipment, once authorised for dispatch, reaches Ukraine in 48 to 72 hours.

Of the $3.4bn in lethal aid that the US has pledged since the start of the war, the US has committed nearly half of it, or $1.6bn, since last week. “I can’t think of another case, certainly not in the middle of a war, doing this as rapidly as we’re doing it,” a former senior US military commander said.

It has taken the US and allies time to figure out what kinds of systems they can provide without provoking a response from Moscow, but so far Russia has not attacked any shipments. “We have no indications that any of the western equipment or shipments have been hit or otherwise deterred by the Russians,” said a senior Nato official.

At the beginning, the estimates were that the Ukrainian military couldn’t hold out for more than a handful of weeks

Over the past week or so, the US has shifted its focus to providing weapons viewed more as offensive, such as heavy artillery, helicopters, armoured personnel carriers and lethal attack drones. By contrast, Washington’s first aid package to Ukraine when the conflict began, valued at $350mn, included anti-armour, small arms and munitions, and body armour.

Biden has maintained two of the red lines he drew at the onset of the invasion: no American troops on the ground in Ukraine, and no Nato-enforced no-fly zone that might drag the military alliance into a direct conflict with Russia.

But there have been some important shifts on the margins. American troops are beginning to train Ukrainians in Europe. And the US sent a Patriot system to Slovakia, which will be operated by US troops, so that Bratislava could send its S-300 air defence system to Ukraine.

And even though the US opposed the Polish MiG 29 proposal, John Kirby, Pentagon press secretary, signalled earlier this week that Washington was now backing efforts by an unnamed country to send fighter jets to Ukraine.

There is no sign that the US plans to let up soon. Biden said on Thursday that he would ask Congress for more money next week “to keep weapons and ammunition flowing without interruption to the brave Ukrainian fighters”.

Underscoring the strategy is Washington’s assessment that the conflict will continue for months if not longer.

“What you’re seeing . . . is the United States is recognising that we’re now in for a grind,” said Dan Baer, a senior fellow at the Carnegie Endowment for International Peace who was ambassador to the Organisation for Security and Co-operation in Europe during the Obama administration.