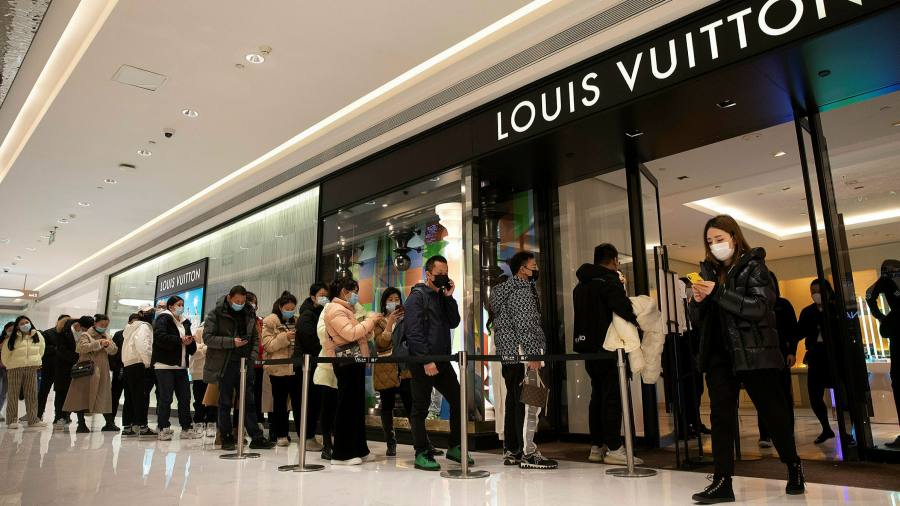 The world’s biggest luxury group LVMH reported stronger-than-expected sales growth in the first quarter despite the resurgence of Covid-19 disruptions in the key Chinese market and economic volatility caused by the war in Ukraine.

Helped by strong sales at its biggest brands Louis Vuitton and Dior, first-quarter revenue grew 23 per cent on an organic basis, a similar pace to the fourth quarter, to reach €18bn. Analysts had expected 17 per cent organic growth, which strips out the effects of currency moves and acquisitions.

The group, owned by French billionaire Bernard Arnault, surfed a luxury boom in the US and China last year, which sent its shares sharply higher. But investors have punished the luxury sector this year because of concerns over slowing global growth and the lingering effects of the pandemic in China, which is the second biggest luxury market after the US.

LVMH shares have fallen 14 per cent in 2022, compared with a 7 per cent drop for the Stoxx Europe 600 benchmark index. Smaller rivals Hermès and Kering are down 18 per cent and 25 per cent this year, respectively.

Nevertheless, LVMH said its fashion and leather goods division, its largest, grew by “a record” 30 per cent organically in the first quarter. Like other luxury groups, it has also been putting through price increases at Louis Vuitton and other brands to offset inflationary pressures.

The groups’ weakest performance was in wine and spirits as sales of Moët champagne and Hennessy cognac only grew 2 per cent organically because of supply constraints.

The US and Europe both experienced double-digit growth, the company said, while Asia expanded more slowly because of the timing of the Chinese new year and the impact of health restrictions.

Asked about how recent Covid-19 lockdowns in China were affecting its business, chief financial officer Jean-Jacques Guiony said the situation was changing quickly. “It is having some impact on the business fairly recently,” he said. Even in cities not affected by the lockdowns seen in places such as Shanghai and Shenzhen, store traffic had been lower and people travelling less, he said. “We will be impacted by that.”

Luca Solca, analyst at Bernstein, said the results meant LVMH “starts the year on a high note” but “all eyes and questions” would be about China and the effect of the pandemic.

Like other luxury brands, LVMH closed its stores in Russia soon after the invasion of Ukraine, but analysts predict limited impact since the market accounted for about 1.5 per cent of group sales. Slower global growth expected this year will probably affect high-end consumption more than a drop in spending from Russian nationals, according to Morgan Stanley.