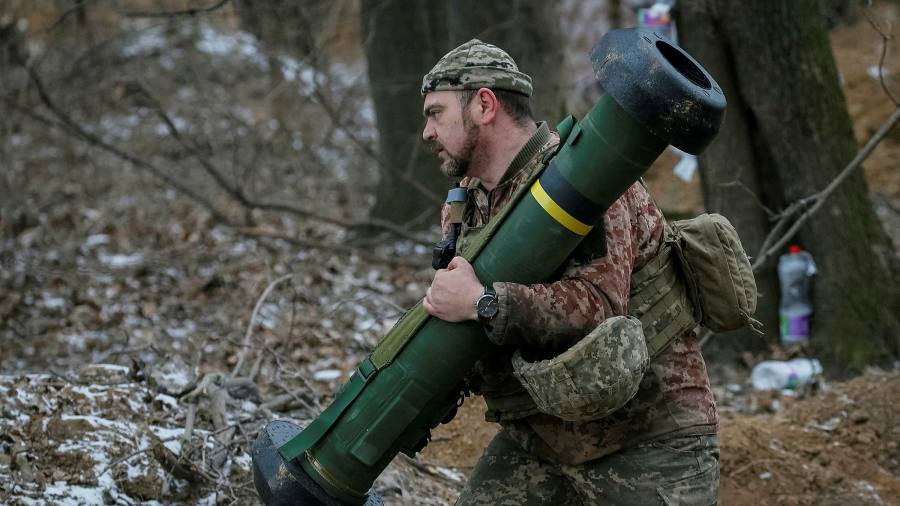 The Pentagon will host a meeting of top arms makers on Wednesday to discuss increasing lethal aid to Ukraine, a US defence official said, as Russian forces regroup for a renewed assault on the east of the country.

The eight largest US defence contractors, among them Lockheed Martin, Raytheon and L3 Technologies, have been invited to the classified meeting aimed at stepping up assistance to Ukraine and preparing for a protracted conflict, the official said.

“We will discuss industry proposals to accelerate production of existing systems and develop new, modernised capabilities critical to the department’s ongoing security assistance to Ukraine and long-term readiness of US and ally/partner forces,” the defence official said.

The US has provided more than $1.7bn in security assistance to Ukraine since Russia’s invasion of the country in February, including more than 1,400 Stinger anti-aircraft missiles, 5,000 Javelin anti-tank missiles and hundreds of Switchblade drones, according to the Pentagon.

The US has already delivered most of a recently pledged $800mn defence package to Ukraine and expects to finish supplying a $100mn package of Javelins by mid-April.

Pentagon officials said the Javelin and Stinger systems had been particularly effective in Ukraine’s efforts to halt Russia’s advance since they are able to precisely target and destroy enemy vehicles.

Raytheon and Lockheed Martin together produce the Javelin and Raytheon makes the Stinger missile.

The US is also looking to co-ordinate the transfer of longer-range anti-aircraft systems and other weapons in response to pleas from Volodymyr Zelensky, Ukraine’s president, as Russia looks to begin a new phase in fighting in the south-eastern Donbas region.

Ukrainian defence officials said that while the Javelin, Stinger and Turkish drones were effective in protecting Kyiv, they will need newer, more sophisticated systems to hold back the next offensive.

The Center for Strategic and International Studies, a Washington think-tank, estimated that the US had given about a third of its Javelin stock to Ukraine and that it would take three or four years to replenish them.

It estimated that the US had sent about a quarter of its Stinger missiles to the country and that it would take at least five years to replace those at current production levels.

The defence official said the US has been in “almost daily communication with key industry partners to directly purchase equipment for delivery to Ukraine and to replenish equipment that is drawn down from US stocks”.