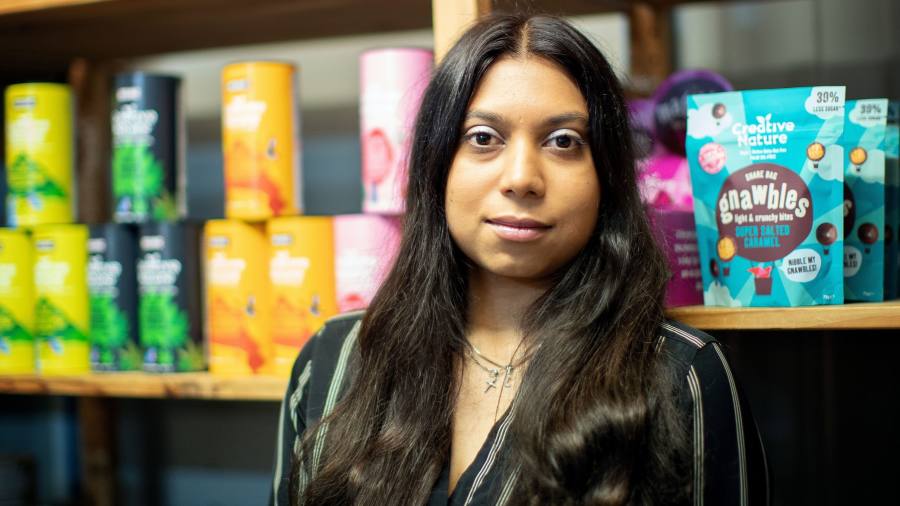 Soaring inflation, rising interest rates and a looming recession are hanging over small businesses that form the bedrock of the British economy. Three owners of companies in the food manufacturing, software development and fishing industries describe the challenges they face and give their verdicts on the Autumn Statement.

Julianne Ponan founded Creative Nature about a decade ago in response to the limited options available for people with food allergies. Her ranges of snacks bars, ingredients and baking kits, which are manufactured in Manchester, are now stocked by high street retailers across Britain. She runs her business, which also exports to 17 countries, from a small office and warehouse in Surrey.

She has budgeted a turnover of about £2mn this year but having made it through the Covid-19 pandemic Ponan said small businesses were “still facing challenges every day”.

Her energy provider had threatened to triple her bills before the government belatedly rolled out its six-month support scheme for businesses. She was disappointed there was nothing from chancellor Jeremy Hunt about what further help companies might get when that support comes to an end in March.

“Where does that cost go? We are really hoping for a new cap to help deal with the costs next year. We will need to relay that to the supermarkets but they might say no. It will need to get passed to the customer ultimately but they are only willing to pay so much.”

As a profitable firm, she would have liked Hunt to lower corporation tax — which will rise from 19 per cent to 25 per cent — or at least move it to a tiered system that alleviates some of the impact on small businesses. “We need to reinvest our profits in the business to grow.”

Her biggest disappointment was the scaling back on R&D tax credits for small businesses, which her firm has used to fund the development of new product ranges and manufacturing processes. “Small businesses are among the most innovative and this will hinder our ability to develop new products.”

But she said the government’s offer of relief for business rates would help. Ponan wants to move her manufacturing to a new factory in the south-east and said that has now became more affordable.

She would also have liked to see the extension of export grants, having used them to help access the Australian and US markets. She said the funding was essential for smaller companies to take that “leap of faith”.

Richard Askew set up his business software development company in 2013 after losing his job. He now employs nine people in Scarborough and York, and supplies software to a range of clients, including Anglo American, the FTSE 100 mining company.

The business, which has revenues of about £250,0000 a year, has been profitable since it started, but like many owners of small companies, Askew pays himself by taking dividends.

He was worried about the impact of the decision to cut the tax-free dividend allowance from £2,000 to £500 by April 2024. “We take as little as possible out of the business as we want to grow, and we want to invest,” he said.

“It just means we have less money go around, be it to take on more staff or to pay higher wages. Will this mean that there are fewer businesses being started, and a return to self-employed status?”

He also warned about the effect of higher corporation tax on smaller businesses: “We don’t have vast reserves.”

Askew had hoped Hunt would extend the R&D tax credit scheme for small businesses, which he has found difficult to access despite developing new products given the use of existing software platforms. He described as “worrying” the decision to cut it back instead. “If we want the UK to be a world leader in technology this seems a strange move.”

But Askew also said that other aspects of the Autumn statement were better than he had expected, pointing to the relief on business rates next year, which he predicted would help many companies.

Jimmy Buchan founded Peterhead-based Amity Fish Company in 2016 after a 40-year career as a skipper of a fishing boat. He supplies the food services and hospitality sector.

He wanted the chancellor to support growth in the Autumn Statement, as well as alleviate some of the costs of doing business in the UK, but was left disappointed. “How much more can small businesses absorb? There needed to be something that makes a small-business owner get out of bed.”

Buchan said instead Hunt had given small businesses almost nothing. “I am a small-business owner. My suppliers are small businesses. These companies are the backbone of our country.”

Buchan is concerned about the freeze to the VAT threshold, effectively sucking many more small businesses into paying the tax given rising inflation, and called on Hunt to reconsider the decision.

“He has acknowledged that inflation eats into pensions but it is disappointing that he has not done so on the impact of these taxes for businesses.”

Although the government removed import tariffs on over 100 goods for two years to UK producers, Askew said minister should also offered export incentives to help small businesses find new markets overseas and address the barriers thrown up by Brexit.

Buchan lost his export markets as a result of the UK leaving the EU and he has sought to replace those lost revenues by growing his online consumer operation selling directly to British households.

With fewer foreign workers, a key source of labour for the fishing industry, staff shortages have pushed up labour costs. Askew was disappointed that there was nothing to help bring overseas staff back to a sector characterised by the “cold, damp and early starts” which he said were less appealing to British workers.

“We have to give more visas to essential workers. I am three months behind on some orders as my suppliers cannot get enough workers. We want to get production up, we want growth but we can’t get that without access to labour.”

Video: The Brexit effect: how leaving the EU hit the UK