Bumper bonuses are back — and particularly jarring 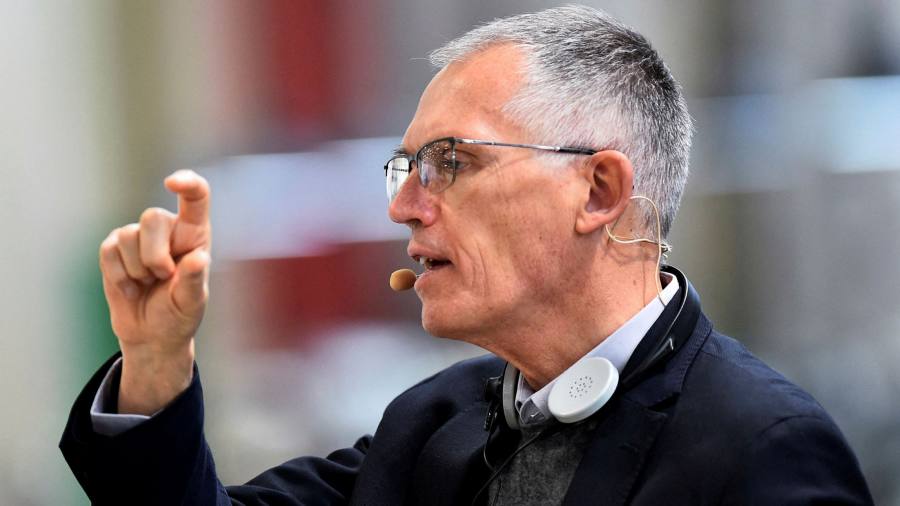 This time last year, it was possible to believe that corporate sermonising about the need to look beyond pure profit was finally starting to bear fruit. The pandemic had prompted most corporate chieftains to show financial restraint. Median CEO pay in the FTSE 100 dropped by almost a tenth and even in the US the inexorable rise in corporate payouts paused.

But then came the pay package of Stellantis chief executive Carlos Tavares, among many others. Admittedly, Tavares had quite a year in 2021. After completing the merger of PSA and Fiat Chrysler to create one of the world’s largest motor groups, he delivered record revenues and margins. His board rewarded him handsomely, with €19mn and long-term targets that put him in line for much more.

Stellantis shareholders were not so easily pleased. They promptly voted down a pay package that was 300 times that of the average employee. The company then found itself in the crosshairs of the French presidential campaign, with Emmanuel Macron and Marine Le Pen competing to drip scorn. Le Pen called the payout “shocking”; Macron tacked on “excessive” and “abusive”.

The Franco-Italian-American motor group is far from the only big company to hand its chief a big boost for 2021. Last year’s frothy stock markets and economic bounceback made it especially easy to hit corporate bonus targets. Among the FTSE 100 companies that have published remuneration results, CEO pay is up by a third for 2021. In the US, CEO pay in the S&P 500 is on track to set records, with a median package of more than $14mn.

Tavares’s payout did not even put him ahead of his US rivals. Ford’s Jim Farley took home $22.8mn last year, and General Motors’ Mary Barra is widely expected to have beaten that. And compared with the big tech groups, the carmakers look almost stingy. Discovery handed David Zaslav $247mn last year; Amazon chief Andy Jassy got $212.7mn.

It would be easy to dismiss the furore over Stellantis as mere election year politicking. But there is something more important going on.

When companies failed to get the message about the need for restraint during Covid-19, investors punished them with substantial dissenting votes on pay plans and even outright rejection. Shareholders were particularly disapproving when pandemic-hit companies changed or dropped metrics to make it easier for plans to pay out. In the US, 18 per cent of companies with more than $50bn in revenue failed to get majority support for their say-on-pay resolutions, and there was a nearly 20 per cent rise in shareholder protest votes on pay in Europe.

We now know companies can show restraint and that, if they do, investors are more likely to applaud than complain. The return to bumper bonuses is all the more jarring because they are coming up for investor approval at a time when consumers are facing sharply rising costs for energy and food.

Macron argues that the solution lies in an EU-level framework to rein in executive pay: “otherwise . . . society will explode”. That seems misguided. The bloc-wide cap on banker bonuses after the 2008 financial crisis did little to hold down pay in the sector, and a 1993 US law attempting to limit CEO salaries is widely seen as having set off an arms race in variable pay instead.

But the current system isn’t working. Shareholder votes on actual CEO pay are nonbinding in most countries, including the Netherlands, where Stellantis is incorporated. General Electric’s Larry Culp recently agreed to cut his annual equity incentive grant by two-thirds after investors roundly rejected GE’s pay plan last year. But he is very much the exception.

Since 2013, the UK has divided say-on-pay votes into two: a nonbinding vote on the previous year’s package and a binding one on the structure of future pay. This has the advantage of giving investors two ways to express their opinion, and the ability to make their disapproval stick in future. But pay plans are complicated, and, as Covid showed, easy to tinker with, so future ones are often hard to evaluate.

Australia holds corporate feet to the fire in another way. Under its “two strikes” law, if more than 25 per cent of shareholders disapprove of a corporate pay plan for two years running, investors immediately get a chance to vote out the entire board of directors. “Spill” votes are extremely rare, but they certainly concentrate the mind.

If Stellantis were facing one, I would bet its board would be doing more than vaguely promising that shareholder concerns will be “taken into account” in next year’s pay report.