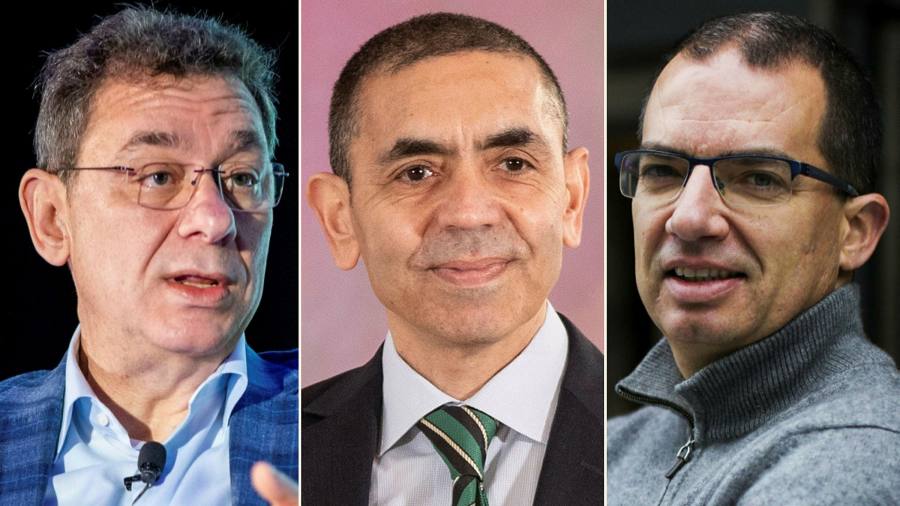 The chief executives of Pfizer, BioNTech and Moderna have shared more than $100mn in pay during the pandemic reflecting the huge commercial success of the mRNA Covid vaccines developed by their pharmaceutical companies.

Albert Bourla of Pfizer, Ugur Sahin of BioNTech and Stéphane Bancel of Moderna have also seen their paper wealth grow over the past two years because of share price increases driven by investor enthusiasm for companies developing Covid-19 vaccines and treatments.

The mRNA vaccines made by Pfizer, BioNTech and Moderna have saved millions of lives during the pandemic while also transforming the companies developing them and prompting a surge in share prices. Pfizer’s stock price is up 60 per cent over the past 24 months, while the value of BioNTech and Moderna’s shares has tripled and increased by five times, respectively.

Moderna’s Bancel and Sahin of BioNTech have become paper billionaires as a result of their 7.8 per cent and 17.1 per cent shareholdings in the companies, which are worth about $5.4bn and $7.8bn, respectively.

The BioNTech/Pfizer jab generated $37.5bn in revenues last year and Moderna’s shot made $17bn, according to Airfinity, a data group.

An analysis of the remuneration packages of the mRNA vaccine makers in 2020 and 2021 shows that Pfizer chief Bourla was awarded the biggest pandemic pay rise. He received $45.3mn in 2020-2021, compared with $27.7mn in 2018-201, a period during which he was promoted from chief operating officer to CEO in January 2019.

Pay experts said the remuneration outcomes reflected the huge profits linked to the Covid vaccines but also how pay in the biopharma sector was closing in on other high-paying sectors, such as banking.

He said that both industries were composed of high-profile companies operating across global markets, with comparable challenges like attracting, retaining and managing highly skilled staff.

Some campaigners have criticised the pay packets for vaccine maker CEOs, accusing the companies of unfairly profiting from the pandemic and not doing enough to ensure low-cost access to jabs in poor nations.

“Bancel, Bourla and the other vaccine kings built a royal fortune predicated on a monopoly business model that has driven vaccine apartheid,” said Steve Knievel, access to medicines advocate at Public Citizen, a progressive think-tank.

But there has been little pushback by investors that have been richly rewarded for backing the companies. “The vaccines provided an incredible return on investment from a societal perspective,” said Akash Tewari, analyst at Jefferies, an investment bank.

He added: “Most investors do not have an issue with executives getting fairly compensated, particularly when they have overseen such an increase in company value.”

The biopharma industry said the rewards were justified given the extraordinary efforts made by leaders during the pandemic in developing Covid jabs.

“Thanks to their hard work, we achieved a vaccine in record time and currently have multiple vaccines available — enough to reach every corner of the globe,” said John Murphy, chief policy officer at Bio, an industry trade group.

Bancel has cashed in on the phenomenal rise in market capitalisation of Moderna by selling $404mn of shares since January 2020, according to data from Verity. Bourla sold $5.6mn of shares on the same day that Pfizer and BioNTech said their vaccine was 90 per cent effective against Covid.

The “windfall profits” drew fire from Elizabeth Warren, liberal Democratic senator, who called on the SEC to consider regulatory “reforms that would prevent abusive practices”.

Pfizer said Bourla’s bonus was appropriate based on his exceptional leadership, his focus on long-term strategy and his contributions to the company’s performance in 2021.

Moderna said the increase in executive pay reflected significantly expanded responsibilities during the pandemic. It added that 94 per cent of Bancel’s 2021 award was performance-based and consisted mainly of equity awards tied to the company’s performance over a four-year period.