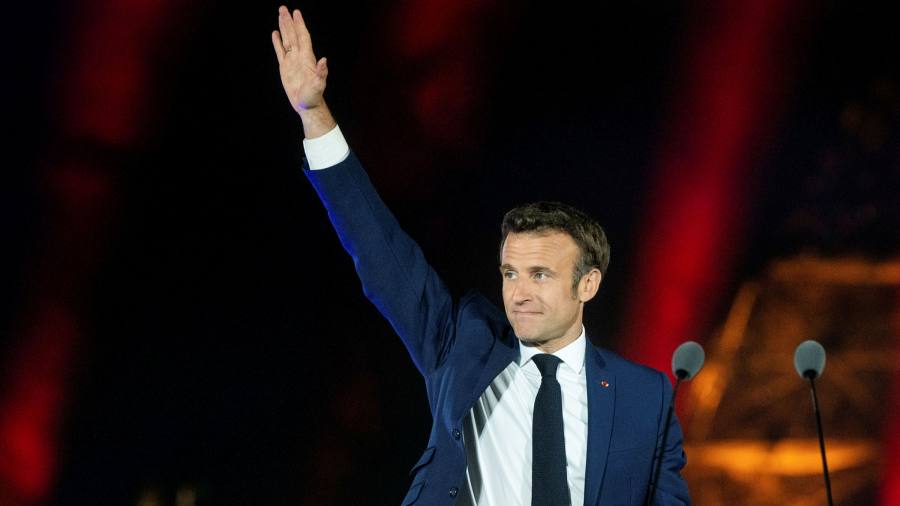 European stocks dropped as relief in a decisive victory for Emmanuel Macron in France’s presidential election was overshadowed by concerns about interest rate rises and the effects of surging inflation on corporate earnings.

Europe’s regional Stoxx 600 share index fell 1.7 per cent in early trading, with similar drops for France’s CAC 40, Germany’s Xetra Dax and London’s FTSE 100. Chinese shares fell sharply while the renminbi lost further ground against the dollar as traders reacted to prospects of a harsh lockdown in the nation’s capital.

The US S&P 500 share index on Friday registered its biggest one-day loss since March as traders anticipated central banks on both sides of the Atlantic would raise interest rates to curb inflation. The 2.8 per cent decline in the benchmark equity gauge came a day after Federal Reserve chair Jay Powell said a 0.5 percentage point interest rate rise was “on the table” in an effort to combat soaring inflation.

“With the French election tail-risk out of the way now, the narrative for EU markets should mostly revolve around the [European Central Bank] policy outlook,” said Emmanuel Cau, Barclays head of European equity strategy.

Swaps markets predict the ECB will lift its main deposit rate in July, in what would be its first increase since 2011, before raising it above zero by October in what would account for a significant transition away from ultra-loose monetary policy in the euro area.

The dollar index, which measures the US currency against six others including the euro and the yen, rose 0.5 per cent to its highest point since late March 2020, boosted by currency traders’ rate rise expectations and equity sell-offs increasing demand for the reserve currency. The euro declined 0.6 per cent against the dollar to $1.07. Sterling lost 0.7 per cent to $1.27.

Later in the week, eurozone inflation data is expected to show the annual pace of consumer price increases in the euro area remained at a record 7.4 per cent last month. US Big Tech groups Amazon, Facebook owner Meta and Apple also release quarterly earnings, after streaming group Netflix shocked investors last week by reporting it was losing subscribers for the first time in a decade.

China’s currency also lost ground, falling 0.8 per cent against the dollar to Rmb6.5458 and taking it about 3 per cent lower this year. The renminbi marked its biggest weekly slide against the greenback in three years last week as the country’s worsening economic outlook and rising returns on US debt undermined the allure of Chinese assets.

Prospective further lockdowns in China also weighed on oil prices, with international benchmark Brent crude down 3.7 per cent at $102.72 a barrel in Asian trading. West Texas Intermediate, the US marker, was off 3.6 per cent at $98.48.