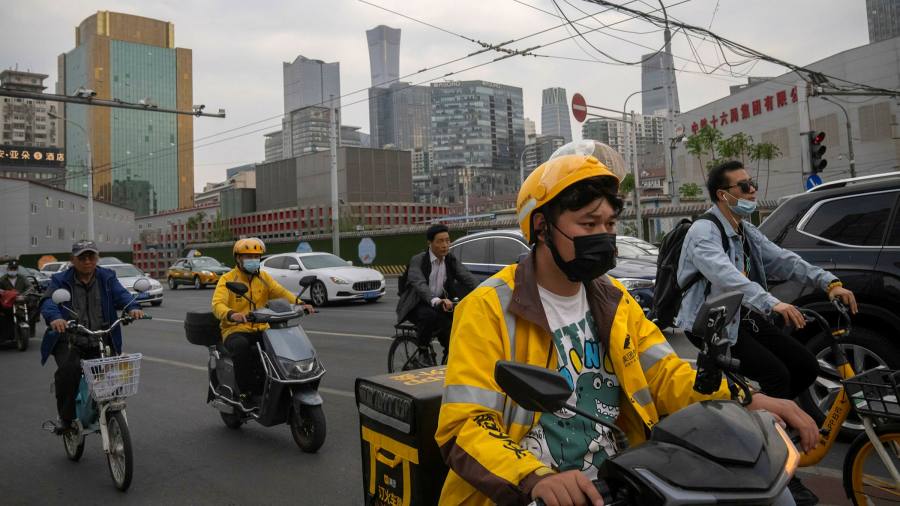 Offshore investors sold a net Rmb113bn worth of Chinese onshore bonds in March, according to Financial Times calculations based on data from Hong Kong’s Bond Connect investment programme. That took outflows over the past two months to Rmb193bn as concerns mounted over China’s economic growth outlook and the debt’s diminishing yield advantage over bonds denominated in US dollars.

“These are by far the greatest outflows since China began opening up its domestic bond market,” said Becky Liu, head of China macro strategy at Standard Chartered, adding that when combined with net selling of stocks, foreign investors had dumped a total of about Rmb234bn in Chinese securities over the past two months. She said the bank expects “persistent outflows” in the second quarter.

Overseas investors for years have turned to the Chinese bond market as a source of juicy fixed-income returns while major western economies embraced quantitative easing and record-low borrowing costs. That dynamic is now reversing as western central banks raise rates and China seeks to mitigate the economic disruption of lockdowns to contain worsening outbreaks of Covid-19.

Expectations of rate rises from the Federal Reserve as it combats surging inflation have pushed up the 10-year US Treasury yield to 2.9 per cent this week, while anticipated easing by the People’s Bank of China has kept the Chinese 10-year yield anchored at around 2.8 per cent in recent sessions. US yields have not exceeded those provided by holding riskier Chinese sovereign debt in 12 years.

The divergence in policy is also hitting China’s currency, with the renminbi falling on Wednesday to its lowest point against the dollar since October 2021.

Jason Pang, a senior portfolio manager at JPMorgan Asset Management in Hong Kong, said recent selling was in part spurred by global investors locking in profits after a year in which Chinese bonds’ relative outperformance made holding them “pretty much required” for many investors hoping to deliver better-than-benchmark returns.

“I wouldn’t be surprised if we see more profit-taking on [Chinese government bonds],” he added.

Investors and strategists said that while renminbi debt’s yield advantage had been squeezed, payouts on Chinese bonds still offer a substantial premium over their US counterparts when adjusting for inflation.

“The big, longer-term picture is not changing at all,” said Jean-Charles Sambor, head of emerging market debt at BNP Paribas Asset management, adding that renminbi bonds still offered returns that did not correlate with other major economies. “It’s a no-brainer to me that the diversification benefits remain extremely strong.”

Liu, at StanChart, said that despite the recent bout of selling, she expected the pace of outflows may have already peaked and that net inflows would return in the second half of this year. But she added that the gap between Chinese and US bond yields could limit the options available to policymakers in Beijing as they grapple with slowing growth.

Despite a wave of severe and economically disruptive lockdowns to contain China’s worst Covid-19 outbreak in two years, the PBoC has remained cautious in its approach to stimulus so far, stopping short of a dramatic loosening in policy that could push yields even lower.

Aninda Mitra, head of Asia macro and investment strategy at BNY Mellon Investment Management, suggested the central bank may have become “wary” about the sharp rising of interest rate differentials, given buoyant rates in the US, because it could encourage greater outflows in pursuit of higher yields.

“The attraction of foreign investors in the Chinese bond market has arguably been reduced,” he said, with capital account pressures becoming “more of a plausible risk”.