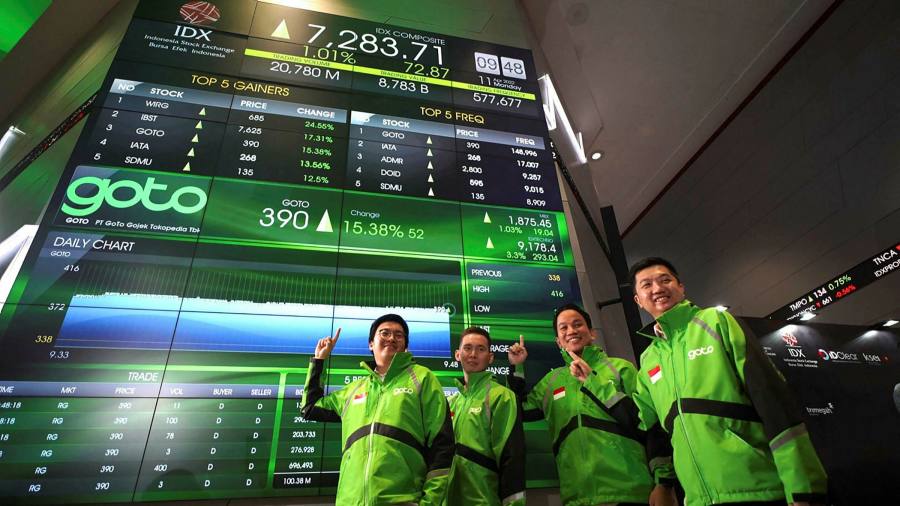 Shares in GoTo, the Indonesian company that offers everything from ride-hailing to payment services, surged in their first day of trading, bucking a global decline in technology stocks in a welcome reprieve for early investors SoftBank and Alibaba.

The lossmaking company’s stock rose 14 per cent on Monday following an initial public offering that raised $1.1bn, one of the largest listings in the Indonesian stock exchange’s history and among the biggest worldwide this year.

The market debut for GoTo, which values Indonesia’s biggest start-up at $31.9bn, is another sign that investors see an opportunity for companies to capitalise on the fast-growing number of internet users in the country, home to the world’s fourth-biggest population.

The IPO will also lift SoftBank and Alibaba, two of GoTo’s biggest investors with 8.7 per cent and 8.8 per cent stakes respectively. Both companies have been hit hard by the tech market rout and a regulatory crackdown in China. SoftBank recently liquidated positions as it comes under pressure to raise cash.

GoTo was formed via the $18bn merger of super app Gojek and ecommerce business Tokopedia last year and has said it has more than 100mn monthly users. It plans to use the proceeds from the IPO to expand across south-east Asia, including in Singapore and Vietnam.

The listing is a boost for the Indonesian stock exchange, which has lured local companies away from international markets through looser regulations, including allowing dual-class shares that give founders greater control of their companies.

But GoTo’s peers in the region face increasing pressure amid intense competition and concerns about profitability.

Shares in Bukalapak have shed about 70 per cent of their value since the ecommerce group completed Indonesia’s biggest ever listing last year. Shares in GoTo’s Singapore-based rival Grab hit a record low this month after it reported a $3.6bn annual loss.

Kristine Lau, an analyst at consultancy Third Bridge, said GoTo also faces “intense competition” and is “unlikely to become number one” in Singapore or Vietnam. The company will have to fend off challengers in its home market as well, with regional rivals such as Grab and ecommerce app Shopee moving into Indonesia, she added.

“[Indonesia] is growing domestic consumption in a significant way post-Covid,” chief executive Andre Soelistyo told a press briefing. “We can’t change or control any of [the global volatility], so what we believed we needed to do is continue to execute on our plans.”

Patrick Cao, GoTo president, said GoTo has “consistently” grown its top line while “optimising on the cost side”.

“We have continued to operate as the underdog. And despite that we’ve been able to maintain and grow our market leading share position,” he said.

He added that SoftBank remained “very happy” with the company’s progress.