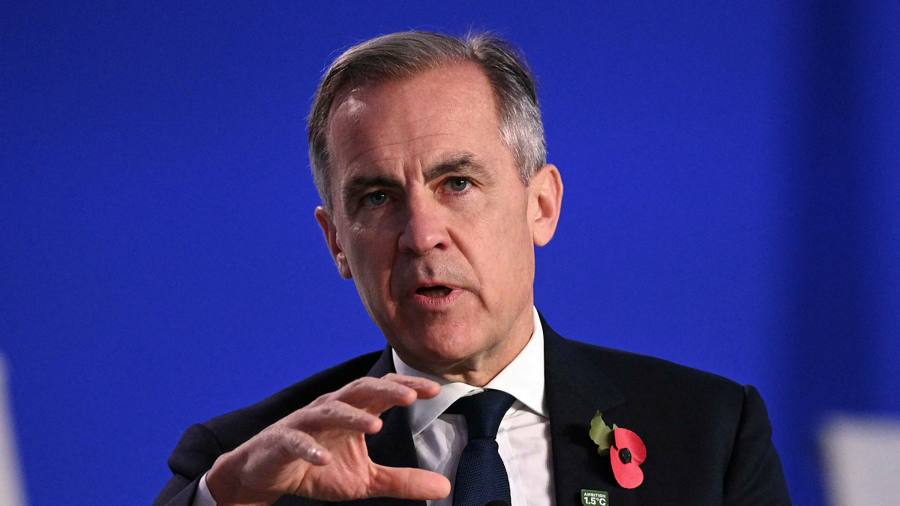 One thing to start: Greetings from an (unusually chilly) springtime Washington, which is almost bustling again after the pandemic lockdowns, due to the meetings of the World Bank and IMF. The bank and fund have been debating some urgent issues this week: Russia’s invasion of Ukraine; spiralling energy prices; the spectre of stagflation; sovereign debt restructuring; and the continued battles against Covid-19, particularly in China. But ESG themes peppered the agenda too, sometimes in surprising ways.

One detail that caught the eye of Moral Money (and the FT’s Free Lunch newsletter) is that the latest IMF World Economic Outlook has a striking chapter discussing how to measure the carbon intensity of the labour force. This is innovative. Another notable development was a lively debate among the international finance institutions about how to fund a future reconstruction drive in Ukraine — and a widespread assumption that this must be “green”. This might seem sadly premature now. But when the war ends, this will be a hot topic for groups such as the European Bank for Reconstruction and Development.

Meanwhile, today we highlight upcoming activity at the Glasgow Financial Alliance for Net Zero, and a warning about how Russia’s invasion will create more — not fewer — stranded assets. In addition, ISS, the proxy adviser, is back in the crosshairs of the ESG debate again. Read on. (Gillian Tett)

When Mark Carney, former Bank of England governor, unveiled the Glasgow Financial Alliance for Net Zero (GFANZ) last April, he did so in a blaze of publicity. But since then, the GFANZ initiative has gone distinctly quiet.

Unsurprisingly, this has sparked fears that global finance leaders are dragging their feet on decarbonisation and/or that ESG initiatives have been derailed by the Ukraine war. This week, for example, a coalition of non-governmental groups — including Reclaim Finance, BankTrack, Re: Common, Urgewald and Climate Action Network-International — wrote to Carney and others warning that without “strong leadership . . . GFANZ is at risk of becoming a smokescreen to hide the finance sector’s foot dragging on decarbonisation”.

However, Carney insists that the GFANZ plans are still on track. And this week Moral Money caught up with him, and Mary Schapiro, the former head of the Securities and Exchange Commission, who is now a key leader of the initiative, on the edges of the IMF meetings in Washington.

“Since COP26 we have got down to work and hired about 40 people to create a plan,” said Schapiro. “Some of it might not sound very exciting but it is critical. It’s the hard technical work of moving net-zero commitments to actual plans.” More specifically, a flurry of recommendations will emerge from the GFANZ in June, around five pillars: how companies can create practical climate transition plans; how the financial sector can support a managed phaseout of high-emitting assets; how finance can find effective pathways for sectors such as steel, transport and agriculture, and measure progress there; how to tackle problems with the quality and availability of data; and how financial groups can align their portfolios with net zero.

In the short term, Carney agrees that Russia’s invasion has hampered the pace of decarbonisation. “That is not good news because it will use up more of the carbon budget.” But in the longer term, he insists, the war is convincing governments of the need to create energy security with domestic — renewable — resources.

“The overlap between energy security and sustainability is strong [in the longer term,] and there is a real issue of cost-competitiveness,” he says, arguing that as companies engage in “friend-shoring” (ie moving their supply lines into friendlier countries) they will naturally reduce scope 2 emissions, which are linked to purchased energy.

However, Carney had one notable warning: the events in Ukraine mean that “we are going to have more stranded assets”. That is partly because more Russian fossil-fuel assets will fall into disuse, he argues. But another issue, according to Carney, is that the energy infrastructure being installed by western governments to replace Russian energy — such as liquefied natural gas (LNG) terminals — will become stranded in the long term too, since they are envisaged only to be a transitional tactic. “The new LNG train will run for 20 years not 50 years — and that changes the economics.”

So how will these “transitionary” assets be financed? Will private sector investors flee from infrastructure that they know will become stranded? Will governments have to step in? If so, how will this be reflected in accounting systems? These are big questions for the GFANZ to ponder. Watch this space, ahead of June. (Gillian Tett)

Is there a clash between ESG considerations and overall investor priorities? Proxy adviser ISS seems to think so, at least when it comes to an upcoming shareholder vote at Bank of America.

On a proposal to impose stricter fossil-fuel financing policies, ISS has advised sustainability-focused investors to vote in favour — while simultaneously recommending the opposite for shareholders in general.

The conflicting advice was published ahead of BofA’s annual general meeting next week, in relation to a shareholder proposal — filed by investors including Trillium Asset Management — asking the lender to align its fossil-fuel lending policies with achieving net-zero emissions by 2050.

Almost identically-worded proposals have been filed at five other major banks, including Goldman Sachs and JPMorgan Chase. Last week the $280bn New York State Common Retirement Fund called on shareholders to back the six resolutions.

In its guidance to “socially responsible” investors, ISS said voting for the proposal would “help ensure stronger alignment between the company’s net zero goals and its policies and actions” and “provide shareholders with a better understanding of the company’s management and oversight of related risks”.

But ISS’s benchmark advice for general shareholders went in the opposite direction, suggesting that they should be satisfied by “the company’s current commitments to low-carbon economy and expected goal setting”.

ISS, which offers a series of tailored recommendations for specialist investors and benchmark guidance, declined to comment on the clash between the two sets of advice. It also declined to provide statistics about how often its voting recommendations conflict with each other.

All six banks have recommended that shareholders vote against the fossil-fuel funding proposals. (Camilla Hodgson)

If the key decisions in the global climate fight were up to you, how would you perform? Find out by playing the FT’s beautifully produced new climate game, where you can test the impact of policies on everything from green hydrogen to disposable coffee cups.

The time to make ESG a reality is now, but is the market ready to join together to make it happen?

Find out at the FT’s Moral Money Summit Europe, taking place in-person in London and live online. Come along and connect with leading policymakers, investors, senior business executives and industry thought-leaders who will share their plans for the next stage of their ESG journey. As a premium subscriber, you can join the event with a complimentary virtual pass when you register with the promo code: Premium2022. Register now