Oil drops as US moves towards releasing more crude reserves 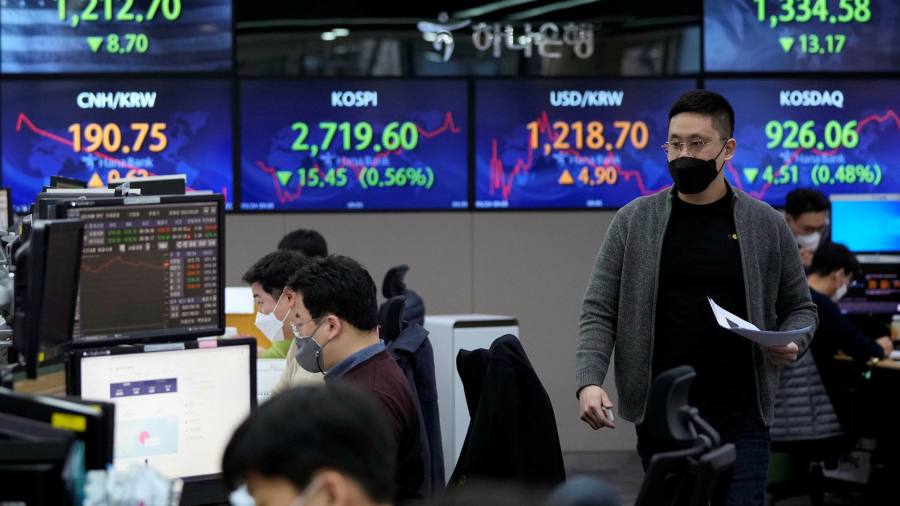 Oil prices fell as the US moved towards another release of emergency reserves to tackle inflation, easing pressure on the $23tn Treasury market that has posted its worst quarterly performance on record.

International oil benchmark Brent crude dropped 5.6 per cent to $107 a barrel as US president Joe Biden was expected to detail plans to cool oil prices that have spiralled since Russia’s invasion of Ukraine, exacerbating already elevated inflation.

The yield on the benchmark 10-year US Treasury note, which moves inversely to its price and underpins global borrowing costs, fell 0.04 percentage points to 2.32 per cent.

This key debt yield has almost doubled since last August, as supply chain disruptions related to the coronavirus crisis drove inflation to multi-decade highs and the US central bank responded with signals of aggressive interest rate rises ahead.

A Bloomberg index of total returns from Treasuries fell 5.6 per cent in the three months to March, its weakest quarterly performance since the inception of the index in 1973.

European equity markets were subdued on Thursday as analysts warned a one-off release of reserves was unlikely to alter the supply outlook for the long term.

The regional Stoxx 600 share index, Germany’s Xetra Dax and the UK’s FTSE 100 were down 0.2 per cent in the late London morning. The Stoxx was on track to end the first three months of the year more than 5 per cent lower, marking its first negative quarter in two years. Meanwhile, futures markets implied the US S&P 500 share index would add 0.1 per cent and finish the quarter down about 3 per cent.

Oil prices have risen almost 40 per cent so far in 2022, spurred higher by Moscow’s invasion of Ukraine and western sanctions on exports from Russia, which is the world’s third-biggest producer behind the US and Saudi Arabia.

A reserve release of 180mn barrels would reduce the amount of “price-induced demand destruction” needed to bring supply and demand back into balance, analysts at Goldman Sachs estimated.

“This would remain, however, a release of oil inventories, not a persistent source of supply for coming years,” Goldman analyst Damien Courvalin cautioned in a note to clients.

There were doubts about the longer-term impact of the plan, said Tamas Varga, analyst at PVM.

“After all, the [International Energy Agency] warned of a potential loss of 3mn barrels per day of Russian crude oil and products due to financial boycotts and self-sanctioning,” Varga said, “and history also tells us” that emergency reserve releases “usually fail to achieve the desired effect”.