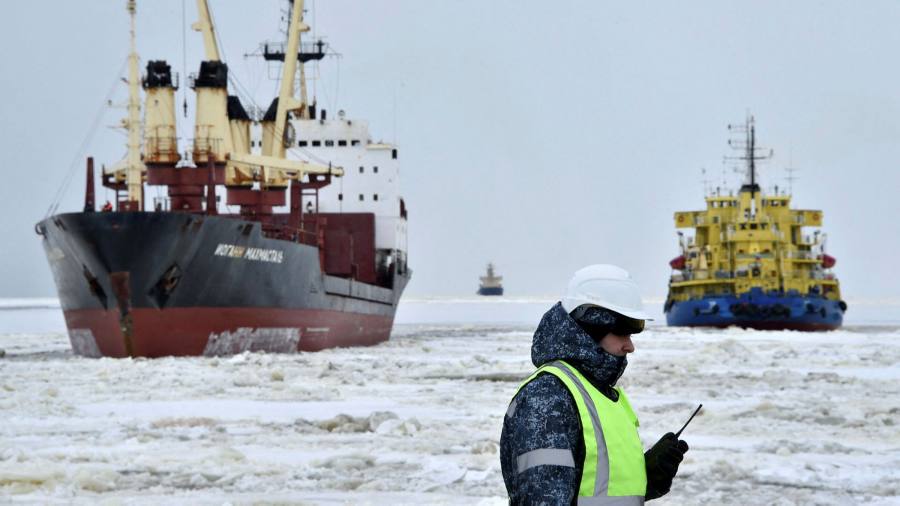 Russia’s Arctic gas ambitions are under threat as international sanctions over the invasion of Ukraine jeopardise deliveries of the specialised vessels needed to ship the fuel from its vast projects in the frozen north.

Construction of its fleet of next-generation icebreakers depends on foreign companies, from Korean shipbuilders to US and Finnish marine engineers, along with a little-known French business with a monopoly over technology vital to transporting liquefied natural gas.

With international shipyards’ Russian partners and customers on sanctions lists, and the EU banning exports of vessels, marine systems or equipment to Russia for most purposes, the orders are now in doubt.

“We don’t see how under these circumstances the [shipbuilding] projects can progress,” said Panayiotis Mitrou, global gas segment manager at ship classification society Lloyd’s Register. “All angles seem to be doomed.”

At stake are Russia’s hopes to ramp up exports from some of the planet’s richest gasfields. Moscow also aims to start year-round cargo shipments along the “Northern Sea Route”, which connects East Asia with Europe via the Bering Strait between Russia and Alaska, within the next couple of years.

Its Arctic developments include the Yamal LNG project in north-western Siberia, which accounted for 5 per cent of global liquefied natural gas exports in 2020, the nearby $23bn Arctic LNG 2 development that is set to export its first cargo in 2023, and the Sakhalin-2 oil and gas development in Russia’s far east.

The three biggest shipbuilders in South Korea, which has committed to mirroring US sanctions on Russia, are building 35 LNG vessels for Russian customers, according to shipbroker Simpson Spence Young.

Samsung Heavy Industries and Hyundai Heavy Industries have joint ventures with Zvezda, a shipyard near Vladivostok in Russia’s far east controlled by a consortium of state-owned companies led by sanctions-hit Rosneft.

The three groups all told the Financial Times that while they were braced for potential issues surrounding payment for existing orders, they intended to fulfil their Russian contracts as normal.

“Countries in Europe continue to import oil and gas from Russia,” said a manager at one Korean shipbuilder. “So why should we stop our existing JVs with Russia?”

But an executive at a key European supplier to Korean shipyards told the FT it would no longer deliver products for Russian vessels, because doing so would either breach sanctions on individual customers or risk violating sanctions on the sector.

“The situation is quite clear,” the executive said. “The technology used for the ships intended for Russian use is a sanctioned product so it’s practically impossible to work on these projects.”

While building the ships would be extremely difficult without its technology, the executive added, Korean yards and suppliers may ask for sanctions exemptions for well-advanced projects.

One senior Korean government official said that while new Russian orders for specialist ships were unlikely as long as the war in Ukraine continued, there were fears in Seoul that Chinese competitors would “fill the void” if existing orders were cancelled.

But shipping analysts say Chinese shipbuilders, led by state-backed Shanghai yard Hudong-Zhonghua, can build a maximum of eight LNG carriers per year, with slots already filled for years, and China has never built the largest tankers that can traverse the harshest ice routes.

The fate of the orders could rest on Gaztransport & Technigaz, the world’s sole supplier of maritime containment tanks for LNG, high-tech receptacles that are needed to store the fuel safely and in large volumes at -163C.

The Paris-listed company, which has €315mn in annual revenues and is 30 per cent owned by Engie, is sticking by its Russian activities while it assesses whether they comply with sanctions.

However, it warned this month of “a potential risk for the continuation and proper execution of certain contracts’‘ under current conditions — raising the prospect of a crucial element of the ships becoming unavailable.

“If these ships get sanctioned on a GTT basis,” said Mitrou of Lloyd’s Register, “then there’s no yard across the world that can provide you with an alternative.”