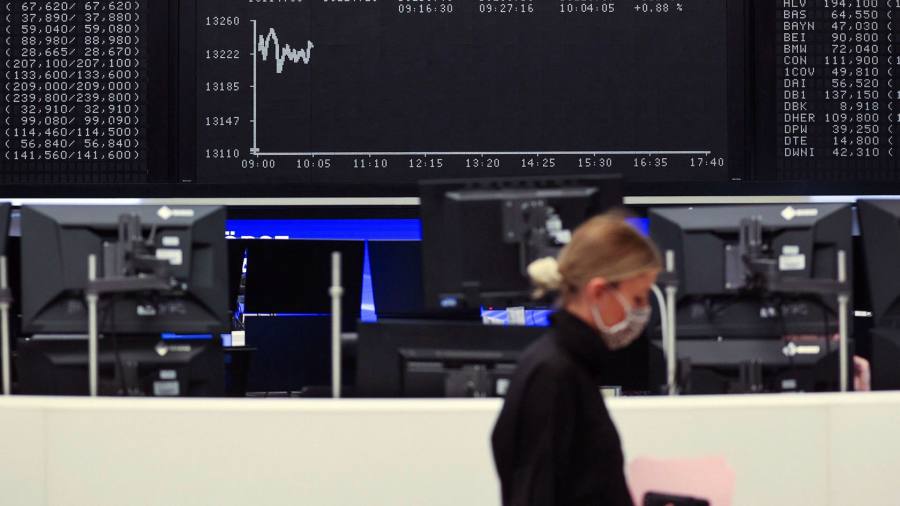 US and European stocks’ winning streak ended on Wednesday, while energy prices climbed as doubts gathered over the possibility of a peace deal in Ukraine.

Wall Street’s benchmark S&P 500 index, which closed 1.2 per cent higher on Tuesday to mark its fourth consecutive session of gains, was down 0.4 per cent in early afternoon trading in New York. The technology-focused Nasdaq Composite was down 0.6 per cent.

Europe’s regional Stoxx 600 index fell 0.4 per cent, having closed on Tuesday at its highest level since February 17 after Moscow said it would reduce its military operations near Ukraine’s capital, Kyiv. Germany’s Xetra Dax lost 1.4 per cent.

The moves came as Ukrainian president Volodymyr Zelensky warned the nation should remain vigilant over Moscow’s claims of de-escalation, following a round of peace talks on Tuesday, and Germany and Austria moved towards rationing gas in preparation for a potential halt in Russian shipments.

Russia’s rouble weakened 4.8 per cent against the US currency, to Rbs84 per dollar. Brent crude meanwhile added 3.2 per cent to just under $114 a barrel. Futures contracts linked to TTF, Europe’s wholesale gas price, added 11 per cent to €118 a megawatt-hour, almost seven times their level of a year ago.

“After yesterday’s optimistic tone regarding a potential ceasefire,” analysts at Bespoke Investment Group said in a note to clients, “much of that optimism has been walked back”.

Global equities have recovered from a bout of selling in early March, prompted by Russian president Vladimir Putin’s invasion of Ukraine, with the FTSE All-World index trading at its highest level since February 11. But investors widely see the bounceback as vulnerable to companies’ earnings being hit by elevated inflation or central banks raising borrowing costs to contain soaring prices.

“It is too soon from a portfolio positioning perspective to start really preparing for a recessionary shock,” said Gregory Perdon, co-chief investment officer at Arbuthnot Latham. “But there is more risk because the guarantee of [central bank] support is no longer there.”

In the US, money markets have priced in eight 0.25 percentage point interest rate rises this year with the potential for fewer, larger increases. The European Central Bank is also rolling back its ultra-supportive, pandemic-era monetary policies.

March has marked the worst month for Treasuries since July 2003, with the Bloomberg US Treasury Aggregate index dropping 3.5 per cent.

On Tuesday, the two-year Treasury yield briefly rose above that of the benchmark 10-year US note, a rare event that has historically preceded recessions.

“We may be seeing this equity rally for the wrong reasons,” said César Pérez Ruiz, chief investment officer at Pictet Wealth Management.

“People who were holding bonds and worried about losing money switched to equities to protect themselves,” he added, noting that shares in companies with adequate pricing power to pass on inflationary pressures to customers might perform well “as long as economic growth is here”.

On Wednesday afternoon in New York, the yield on the two-year Treasury note rose 0.02 percentage points to 2.33 per cent, close to its highest level since May 2019. The benchmark 10-year yield sat just above the two-year, at 2.35 per cent.