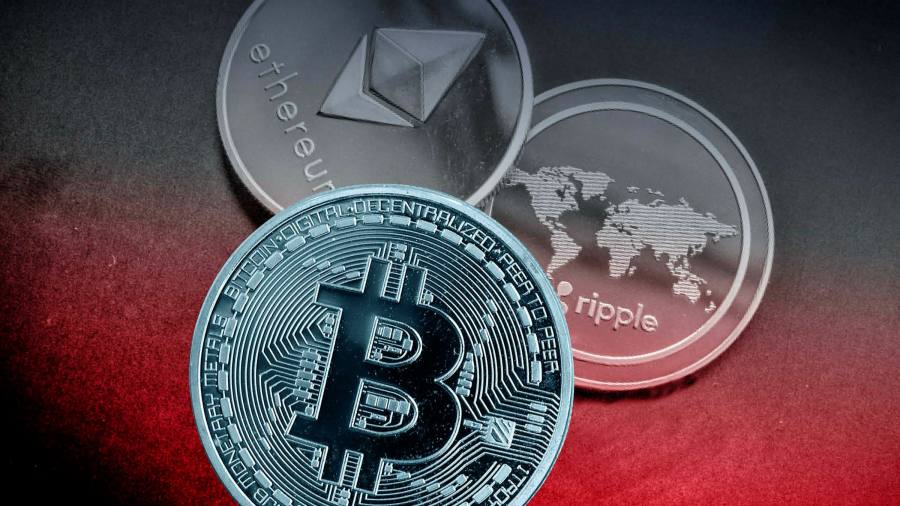 Good morning. Stocks had a bad first quarter; the S&P fell almost 5 per cent. That said, with hot inflation, a Federal Reserve that is tightening, high valuations, and a war in Europe, one might wonder why the losses were not worse. Some thoughts on that below. Are we being too negative? Send us an email to brighten our mood: [email protected] and [email protected]

Are we living in a dream world? That is the question that stuck with me after writing Thursday’s piece for our collaboration with Chartbook. Inflation is scalding, and the Fed is vigilant. We are flirting with an inverted yield curve. And yet markets, judging by the Fed funds futures curve, stock prices, and other indicators, are saying we will glide through the next few years without the US central bank needing to raise rates to even 3 per cent, and without falling into recession.

That’s without even mentioning the little fact that there is a war on in Europe. Yet stocks don’t seem to care. Even in Europe, where many expect at least a mild recession, stocks are basically unchanged since Vladimir Putin launched his invasion of Ukraine:

The sole dissenter from the atmosphere of breezy indifference is the 10-year/2-year yield curve, which has been flirting with inversion (but only flirting). Now, war is not uniformly bad for the economy, and markets are not the economy anyway. Still, this is an odd situation, especially because this war is having a big inflationary effect on oil, gas and industrial metals.

My colleagues Robin Wigglesworth, Philip Stafford and Tommy Stubbington have written a fine read discussing what markets might be missing. In addition to the fact that war-driven inflation is a drag on the economy, they emphasise that a Russian sovereign bond default could have unforeseeable systemic consequences. While Russia has avoided default so far, there is a $2bn bond coming due on Monday, and it may be a close-run thing.

There probably is some systemic risk from a default. But because Russian bonds — sovereign and corporate — are only a single-digit percentage of emerging market bond indices, the bond analysts and traders I have spoken to think only a small number of specialised investors and perhaps a few small eastern or central European banks stand to take big hits.

What worries me is the war’s impact on commodities — the way it will add to inflationary pressures, slow economies and corner central banks. Why doesn’t this worry stock and bond markets more? I only have two unsophisticated ideas about this, which apply only to the equity side:

There is also the possibility that the war just isn’t that important, financially. The sheer horror of it, the terrible misery it visits on a few million people, and its devastating effect on the economies of the two countries involved, may make us overestimate its global economic impact.

Paul Gruenwald, economist at S&P Global Ratings, estimates for example that the war will depress global gross domestic product 0.6 per cent, to 3.6 per cent, this year. Europe will take the worst of it. This doesn’t sound too bad. But Gruenwald follows the market in assuming that the Fed won’t be forced to push rates past 2.5 per cent or so. That is, he assumes that inflation will go quietly. This seems an uncertain bet to me, and I’m surprised markets are making it with such confidence.

Most bitcoin is held by a few big investors, or whales, who rarely sell. Eighty-two per cent of bitcoin just sits there, by one estimate. So if you’re Salvadoran president Nayib Bukele, trying to sell an uneconomical $1bn bitcoin-linked bond to stave off your country’s default, the whales might look an obvious source of demand. From a Wednesday FT report:

Demand from bitcoin “whales” — investors holding large quantities of the world’s biggest cryptocurrency — is likely to be crucial to fundraising for the bond, according to people involved with the effort.

Paolo Ardoino, chief technology officer at Bitfinex — which is set to provide the tech platform for the deal — said the crypto exchange has received “half a billion dollars” of interest from its users.

Potential buyers of El Salvador’s bond are also still lacking basic information around the legal framework for the [bonds], or which entity will issue them.

People close to the project are betting that big entities in the crypto community will see the bonds as an attractive investment despite the relatively low returns and uncertainties surrounding them.

Notably, this is a pivot from Bukele’s previous approach, which was to pitch the bond to retail investors. The plan was to sell the bond in $100 slices to meme investors. Less than a month ago, the FT’s Christine Murray filed this report in mid-March from San Salvador:

Josué País, owner of an El Salvador taxi business that accepts payments in bitcoin from the tourists who use the service, is enthusiastically backing the country’s latest plan to cash in on the cryptocurrency craze.

“The curiosity is what gets me,” said País, 36, who was planning to buy about $200 of the central American country’s “bitcoin bond” set to launch this week. “Number one, I’m going to do it to support the country. Number two, because it’s a big, attractive bet.”

The country’s millennial president Nayib Bukele is relying on interest in the bitcoin-backed bond from the likes of País and retail investors worldwide. It was one of the few options left to help bail the nation out of its financial hole, analysts said.

Now the bond is delayed, with Bukele saying El Salvador needs to focus on pension reform instead. Who knows the reason, but here’s a guess: not enough buyers. What if retail investors are bored of bitcoin? Since the bitcoin bond was announced in November, bitcoin on-exchange trading volume has fallen by a third:

Bitcoin-related chatter is dying down too, as this Bloomberg chart shows:

Might Bukele harpoon some willing buyers from among the whales, instead? Peking University professor Michael Pettis thinks so. Here’s Pettis in a tweet on Wednesday:

Large bitcoin investors probably have no choice but to invest in the bond. A failed deal would probably cause much greater losses in the value of their bitcoin holdings than any direct losses on the bond might.

The problem is that if the bond is successful, not only will El Salvador issue more bonds, but investment banks will immediately begin proposing similar deals to other marginal sovereign credits.

Maybe the spectacle of Bukele’s bitcoin bond going up in flames would hurt bitcoin prices, but I’m not sure the effect would be lasting. The flipside of crypto markets’ volatility is that they move on fast.

One player who really might lose from the bond sale failing is Bitfinex, the crypto exchange and El Salvador’s tech partner. Its parent company also controls Tether, the biggest stablecoin. Tether is backed by reserves that are supposed to ensure its peg to the dollar. But it has played fast and loose with those reserves before, including unspecified investments in commercial paper. Bitfinex’s Ardoino told the FT that it wouldn’t help market the El Salvador bond, but Moody’s Jaime Reusche, a close El Salvador watcher, speculates that the company could help in other ways:

If Bitfinex is backing this issuance, then they could potentially also have a pretty interesting source of funds from the resources that [Bitfinex’s parent company] invests in the reserves for Tether. It isn’t outside the realm of possibility that they channel some of those funds into helping make this issuance successful.

Perhaps they only need $500mn in commitments from investors, and then the other $500mn can come from investments from Tether reserves.

To repeat, this is speculation. Investing reserves in this way would be incredibly reckless. Reserves are supposed to preserve value, and plunging them into a first-of-its-kind bitcoin bond could invite legal trouble. It’s not inconceivable, though. In 2018 Bitfinex used Tether reserves to cover a liquidity shortfall at the exchange, as a well-publicised case brought by New York authorities revealed. It certainly wouldn’t be the strangest twist in El Salvador’s bitcoin saga. (Ethan Wu)

No one understands how real interest rates work. Really — no one.