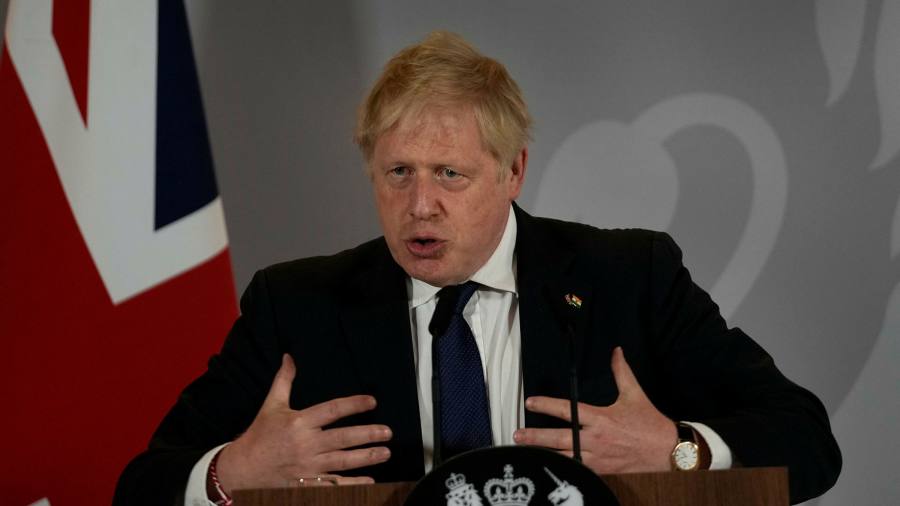 The UK has proposed sending tanks to Poland to allow Warsaw to pass its own tanks to Ukraine, Boris Johnson said, as he became the first western leader to concede Vladimir Putin could win the war.

The British prime minister, speaking during a trip to India, predicted gruelling months ahead and said it was possible the conflict in Ukraine could continue until the end of next year.

The UK government has been reluctant to send armoured vehicles directly to the Ukrainian government. But he said western countries needed to look at what more they could do militarily and economically to create “wave after wave of intensifying pressure on Putin”.

Johnson outlined a potential “backfilling” manoeuvre whereby the UK would compensate Poland if it provided its own T-72 tanks to Ukraine.

“We are looking more at what we can do to backfill in countries such as Poland, who may want to send heavier weaponry to help defend the Ukrainians,” Johnson told a press conference in New Delhi.

Asked if Russia could win the war, Johnson admitted it was a “realistic possibility”, adding that Putin was determined to “grind the Ukrainians down”. Russia was also very close to securing a land bridge in Mariupol, he added.

“The sad thing is that that is a realistic possibility, yes of course . . . the situation is, I’m afraid, unpredictable at this stage.”

His statement was the first admission by a major western leader that Russia could triumph in the war and marks a significant shift in his own rhetoric from just weeks ago. It also breaks with the united front G7 leaders have shown since the invasion began.

Johnson went on to say that Putin would never be able to “conquer the spirit of the Ukrainian people” and was instead strengthening and reinforcing resistance against the invading Russian army.

Speaking after a meeting of Nato leaders in Brussels last month, Johnson said: “Putin’s failure in Ukraine is vital for the peace and prosperity of all of us . . . the people of Ukraine will prevail and Putin must fail and he will fail.”

US president Joe Biden said on Thursday that “our unity with our allies and partners . . . is sending an unmistakable message to Putin: he will never succeed in dominating and occupying all of Ukraine. He will not — that will not happen.”

Johnson announced the reopening of the British embassy in Kyiv in recognition of the Ukrainian government’s success in holding off the Russian army from the capital city.

The UK prime minister said the decision to reopen the office next week was a reflection of the “extraordinary fortitude and success of President Zelensky and the Ukrainian people in resisting the Russian forces in Kyiv”.

Speaking during his visit to India, Johnson also paid tribute to British diplomats who had remained elsewhere in Ukraine since the Russian invasion in February.

The British government started moving staff out of the Kyiv embassy in January as speculation grew about a likely invasion of Ukraine by Russia.

On February 18, just six days before the invasion began, the government moved remaining diplomats from Kyiv to temporary offices in Lviv in the west of Ukraine as a “temporary” measure.

Johnson conceded that the Indian government — which has abstained on several procedural motions on Ukraine at the UN — had a longstanding historic relationship with Russia. But he said that Narendra Modi, India’s prime minister, had intervened several times with Putin to “ask him what on earth he thinks he’s doing”.

Video: Ukraine’s battle of the airwaves