Buyers go higher for snow-sure locations in the French Alps 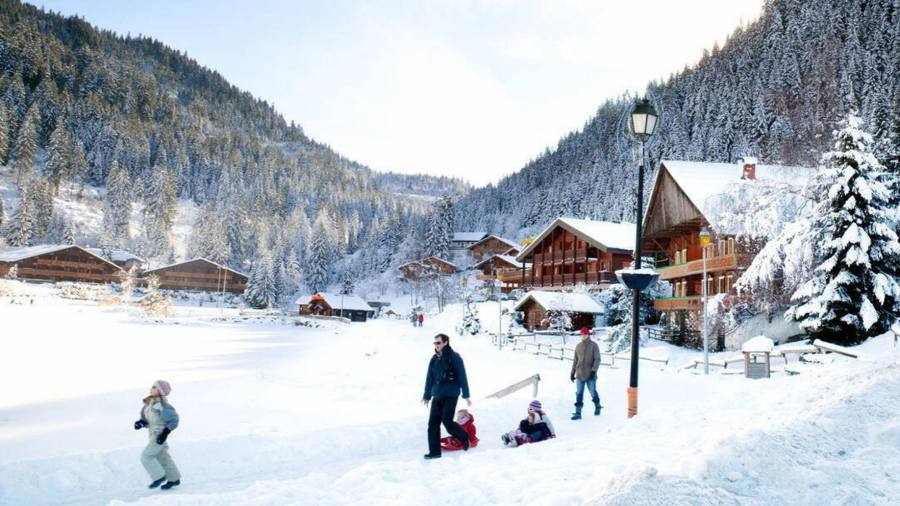 At 39, Steve Burton from Derbyshire arrived late to skiing but took to it in a big way. “Being a keen hiker who’s climbed the Matterhorn, I’ve always had the mountains in my blood,” he says. “But there’s nothing quite like carving a perfect turn at speed down a piste. The feeling of freedom is incomparable.”

Thirty years later, after dozens of trips to many parts of the Alps, he is this week completing the purchase of a four-bedroom penthouse apartment in the ski resort of Les Gets in south-eastern France. Located within 100m of the ski lift, the new apartment is within a traditionally styled wood and stone building and cost €1.7mn.

Les Gets was not his first choice. Loving the authentic feel of Austrian resorts and their convivial après-ski, initially he had planned on buying in Austria but hadn’t realised that non-EU nationals cannot easily buy properties there. “You have to form a company and I didn’t fancy the ongoing costs for this and the extra complications,” says the venture capitalist.

He switched to the Portes du Soleil — a large ski area that straddles France and Switzerland. “The main objective was to have a place where the family can gather, and the short transfer from Geneva was a major factor with three grandchildren under two. Teaching them to ski will be very special.”

With the outlook for the global economy looking gloomy — and in the midst of a worsening energy crisis — avid skiers such as the Burtons are hoping at least for their first normal ski season in three years, following Covid-related disruptions.

Resort operators are hoping for the same. Some French resorts have said they may reduce the speed of ski lifts, scrap the Christmas lights or reduce the temperatures of hot tubs to save energy. But ski stations will remain open all winter, according to Alexandre Maulin, head of DSF, the ski lift operators’ union.

This summer was especially busy for the Alps’ estate agents. Across the 46 Alpine resorts tracked by the agent Savills, prime residential asking prices — defined as properties with asking prices over €750,000 — grew, on average, by more than 20 per cent in the year to September.

Profiting from a lack of international buying restrictions that dent demand for homes in the Austrian and Swiss Alps, and strong domestic sales, virtually all French ski resorts have shown price rises over the past year. According to estate agent Knight Frank, which measures the price per sq metre of 12 resorts in the French Alps, the biggest price increases were recorded in Les Gets and its neighbour Morzine, up 11 per cent and 9 per cent respectively in the year to the second quarter of 2022.

Over the same period, prices in the country’s most expensive resorts — Val d’Isère, Courchevel and Méribel — increased by less than 3 per cent.

According to data on Meilleurs Agents (drawn from Insee, the French statistics office, and Notaires de France), mainstream prices across the Haute-Savoie region, which includes Les Gets and 44 other ski resorts, have increased by an average of 7 per cent in the year to date, while for those in the Savoie (the department that includes the Three Valleys and Val d’Isère) it’s 2 per cent, and Isère (Alpe d’Huez and Les Deux Alpes), 6 per cent.

Behind these figures are several trends. Lack of properties for sale has been a factor across many resorts, with Savills reporting that their number of prime listings has fallen 28 per cent year on year. At the same time, though, buyers seem to be keen on purchasing homes in resorts that either have year-round rental appeal — by offering summer activities such as first-rate hiking and mountain biking — or are in high-altitude, snow-sure locations.

Climate change is “finally” persuading buyers to opt for some higher yet less expensive resorts such as Alpe d’Huez, at 1,900 metres, for their snow reliability, says François Marchand of Erna Low Property. “It’s not a favourite skiing destination of the British, but we’ve seen more buyers there. Typically they have a budget of around €750,000 and want a two-bedroom apartment.”

In a new development in the centre of Alpe d’Huez, Erna Low is selling two-bedroom apartments for €759,950 and three-bedroom ones for €850,000. The average apartment in Alpe d’Huez costs €8,085 per square metre, according to SeLoger, and it’s possible to find a one-bedroom second-hand apartment for €200,000, but there are few resales available for sale.

I considered Les Gets [at 1,200 metres] but will there be enough snow there in a few years?

In April, Londoner Mark Stockhausen and his wife Louise bought a three-bedroom apartment in Alpe d’Huez “purely for the skiing”.

“I considered Les Gets [1,200m] but will there be enough snow there in a few years?” says the father of three, who works in hospitality. “[Alpe d’Huez] is a bit of an outlier compared to the well-connected network of the Three Valleys but it will be good if the long-planned lift link to Les Deux Alpes happens.”

Small flats in Alpe d’Huez, Les Deux Alpes and also Serre Chevalier have increased in price due to domestic demand, says Jackson Collins of Leggett Immobilier. He says finding these for €50,000 was not unusual two years ago — now they cost nearer €130,000. Although lending rates have increased, with French households protected from steep energy rises — they are capped at 15 per cent — and with inflation at 6.2 per cent, properties are still selling within a couple of weeks of going online.

He says that low mortgage rates have been a strong driver of domestic buyers over the past 12 months. Despite the rise in the ECB base rate this month, the legal maximum rate for French mortgages is 3.05 per cent until January 1. This rate (known as taux d’usure) is defined by the Banque de France every quarter. According to Gary Connell of ICE Finance, a mortgage broker, “Deals have hit 3 per cent now but without doubt they will rise next year.”

Edouard Dujardin from Versailles says low mortgage rates this summer were the main incentive for his purchase of an eight-bedroom chalet — he has seven children to accommodate — in Les Contamines, a traditional village at the foot of Mont Blanc.

“We love skiing and also wanted a second home to escape to in case there is another pandemic”, says the president of a digital consultancy. Dujardin is confident his new resort will be resilient against the effects of climate change for some time to come. “Our chalet is at 1,230m,” he reasons. “And the resort is good for early-season skiing.”

In April Ben Vellacott managed to get a mortgage fixed at 2 per cent for 22 years when he upgraded his three-bedroom apartment in Morzine to a five-bedroom chalet.

“We spend a month there in both the summer and winter and wanted somewhere big enough for the whole family,” says Vellacott, who is from Oxfordshire and who runs an agricultural equipment dealership. “After 10 years of having a home there we love the small town and drive door to door in 10 hours.”

He is not deterred by the low altitude of the resort, at 1,000m. “It’s lined to Avoriaz [at 1,800m] which is very snow-sure, and Morzine’s tree-lined slopes hold snow well,” he says.

Vellacott is among buyers prioritising dual-season resorts for a combination of lifestyle and rental returns. Particularly favoured are the Portes du Soleil resorts, which are famed for their summer activities.

Simon Buxton is another. After seeing how popular nearby Les Gets was in July last year, he decided that strong summer rentals would help a ski property pay for itself. The actuary from Sevenoaks in Kent bought a new six-bedroom apartment there this spring.

“We’d never been to a ski resort outside winter but when we drove down, we couldn’t believe how busy it was,” says Buxton. “The lifts were open for people hiking and biking and the restaurants bustling.”

Buxton is going to offer “hotel services” in the form of a pay-as-you-go chef with his apartment so he can claim back the 20 per cent VAT payable on the purchase price of the new-build property.

Mark Nathan of Chalet 1066, a rental management company that sources local chefs and cleaners across its 45 rental properties, says this more “cost effective” modus operandi is increasingly popular in Les Gets. “Since Brexit, the fully catered chalet model [employing British seasonal workers] has been difficult. We work with buyers, mainly British, who want to buy new homes and let them out for 45 to 46 weeks a year.”

Achieving lengthy periods of occupancy is becoming easier in low-lying resorts where summer tourism is more vibrant. The number of summer overnight stays in Les Gets increased from 328,535 in 2018 to 389,900 in 2021, the latest year that data is available for, according to the Portes du Soleil tourist office.

Some buyers from the Netherlands and Luxembourg are looking at the Portes du Soleil resorts as an alternative to Austria, says Giles Gale of Alpine Property Finders, an agent. “These family-friendly villages with lots of mountain biking are within easy access of Geneva and a practical drive for the Dutch and Belgians.”

While British buyers like Burton are eschewing Austrian resorts by necessity, a notable number of Dutch buyers are switching to French resorts because most Austrian ski properties come with a rental obligation that makes reselling harder, says Lloyd Hughes of agent Athena Advisers. Austria also has higher buying costs: 6.6 per cent versus 2 to 2.5 per cent in France.

“Châtel is especially popular — it’s under nine hours by car from Eindhoven [where many buyers live],” says Hughes, who adds that three-bedroom apartments in traditional chalet-style buildings for under €1mn are sought after.

The average price in the traditional-style village of Châtel has increased by 9 per cent over the past two years, according to Meilleurs Agents.

For Debbie from Notting Hill, west London, “unpretentious” but dual-seasonal Chamonix (1,000m) was her choice for a new five-bedroom chalet for her family, including five young adults. “I didn’t want the shallower experience of being somewhere that is just a ski resort,” says the psychotherapist, who prefers not to use her real name.

She’s spending more than is usual on the outside areas of a ski chalet, with decking, an outdoor kitchen and a hot tub to help attract “important summer rentals”.

Meanwhile Steve Burton is looking forward to three generations of his family gathering for their first Christmas in their new ski home. “If everything goes well, we might even upgrade to a chalet,” he says.

Apartment, Three Valleys, €200,000
A one-bedroom apartment in a ski-in/ski-out building in Les Menuires, a resort in the Savoie department. The property, which measures 31 sq m, is sold with a rental contract obligation, with three weeks of owner usage. Available through Leggett Immobilier.

Semi-chalet, Châtel, €1.25mn
A three-bedroom semi-chalet in a traditional Alpine ski resort near the Swiss border. The three-storey property, which was renovated in 2012, has 140 sq m of interior living space, as well as a garden and large balcony overlooking the town below. Through Athena Advisers.

Chalet, Les Gets, €3.5mn
A six-bedroom chalet near the Mélèzes piste in Portes du Soleil. The property, which has 309 sq m of internal living space, has underfloor heating throughout and was renovated in 2015. There is a private garden with a Jacuzzi. Available through Savills.