Do Russians really support the war? 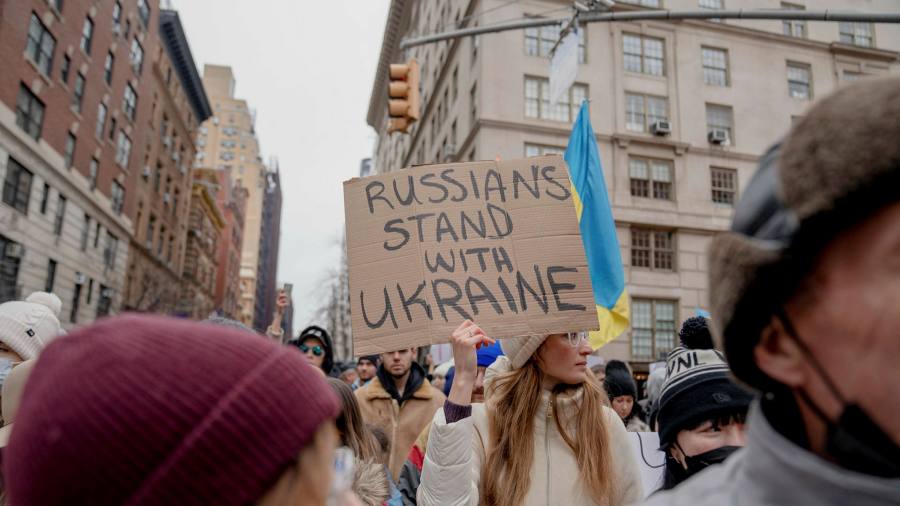 This article is an on-site version of our Europe Express newsletter. Sign up here to get the newsletter sent straight to your inbox every weekday and Saturday morning

Good morning and welcome to the Financial Times’ inaugural Europe Express Weekend newsletter. I’m Tony Barber, the FT’s European Comment Editor, and every Saturday I’ll be offering you my thoughts on one of the big themes of the week. Existing subscribers to our weekday Europe Express will receive the email, and new subscribers can sign up here.

This weekend I’m looking at Russian public opinion. Do Russians support Vladimir Putin’s invasion of Ukraine? Do they support Putin? Just how accurate are opinion polls in an authoritarian system that silences critics and punishes dissent?

Let’s start with an Instagram post from the Russian business tycoon Oleg Tinkov. “Of course there are morons who draw Z [a symbol of Russia’s armed forces], but 10% of any country are morons. 90% of Russians are AGAINST this war!” he wrote this week.

Later on, in a post exceptionally rich in profanities, he added: “The [Russian] generals, waking up with a hangover, realised that they had a shit army. And how could the army be good if everything else in the country is shit and mired in nepotism, sycophancy and servility?”

Good old Tinkov, you might think. Brave chap. But wait a second. This is a billionaire under sanctions by the UK government who, it is thought, isn’t living in Russia at the moment.

But is there a more reliable, scientific way of measuring Russian attitudes to the war? In my view, the most interesting survey is one that was conducted on March 24-30 and published this month by the Chicago Council on Global Affairs and the Levada Center — which is Russia’s most reputable, independent polling group.

They released their findings under the headline “Russian Public Accepts Putin’s Spin on Ukraine Conflict”. (That noise over there is a volley of expletives from Tinkov.)

According to the survey, some 53 per cent of Russians strongly support and 28 per cent somewhat support their country’s military operation in Ukraine. A similarly large majority expresses a favourable view of Putin.

However, I would caution against treating even this as the final word on the subject. As the report’s authors point out, the Russian government has outlawed the terms “war” and “invasion” to describe what it’s doing in Ukraine. Therefore the survey’s questioners used the less alarming words “military operation” or “military action” when asking Russians for their views.

Furthermore, the survey used the terms “denazify” and “denazification”, because that’s how the Russian authorities and state-controlled media, at least until this month, defined one objective of the war. Yet this inflammatory Great Patriotic War-style language is pure propaganda and a barefaced lie.

In other words, the survey’s questions were not phrased as impartially as you would like. But what else can you expect, given the intensifying climate of intimidation in Putin’s Russia? Matters stand differently in Ukraine.

Two experts on Russian public opinion at Northwestern University in Evanston, Illinois, put their finger on the problem. “In the current environment of extreme censorship in Russia, it’s very difficult to know what to make of polls and of public opinion in general,” wrote Jordan Gans-Morse less than a month after the invasion.

His colleague Olga Kamenchuk estimated that older Russians are twice as likely to support the war as younger ones. In an assessment backed up by the Chicago-Levada survey, she said Russians who rely on state television for their news were “significantly more likely” to support the war than those who rely on the internet, with its wider range of sources.

I recommend this trenchant analysis in Foreign Affairs by Andrei Kolesnikov, a scholar at the Carnegie Endowment for International Peace:

“Putin has divided the nation. Both opponents and supporters of the Russian leader have become more radicalised . . . Fear of authority not only prevents people from protesting against a barbaric war, it also makes them unable to admit even to themselves that Putin’s Russia has committed something dreadful.”

It’s the French presidential election tomorrow, pitting Emmanuel Macron against Marine Le Pen. Here’s Jérémie Gallon on how post-election French foreign policy will need to change. And Simon Kuper on why the French, or many of them, think they’ve never had it so bad. Valentina Pop will return on Monday with Europe Express to bring you more news and developments driving the day.

Tony’s picks of the week