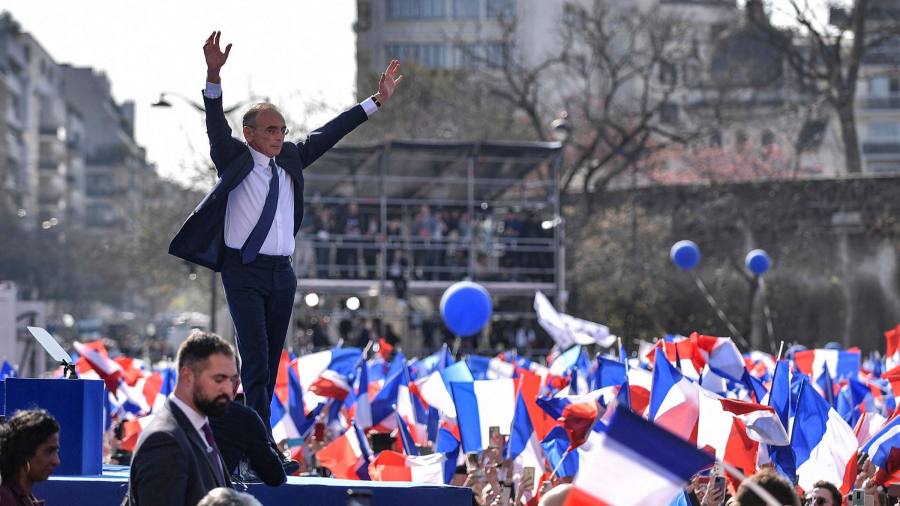 With one of the biggest rallies yet of France’s presidential campaign, anti-immigration candidate Eric Zemmour sought on Sunday to reignite his status as a wild card to be reckoned with despite a recent slide in polls.

On a stage with the Eiffel Tower behind him, Zemmour exhorted the cheering, flag-waving crowd to keep the faith. “You came today because you could feel that history was being written. They thought you wouldn’t come, they thought you were resigned . . . it’s a signal, a life-size poll. It’s a foretaste of the surprise to come,” he said, to chants of “we love you” and “Élysée!”

Yet despite the show of force on the Trocadéro plaza in Paris, the former television pundit looks increasingly unlikely to achieve his goal of elbowing aside longtime far-right leader Marine Le Pen to make an expected run-off against incumbent Emmanuel Macron.

The Russian invasion has drowned out Zemmour’s main campaign message, namely that France must be saved from what he calls out-of-control immigration and an expansionist Islam, while also shifting voters’ attention to economic issues that favour his rivals, such as inflation and rising energy prices.

Zemmour has also come under fire for his long-held admiration for Vladimir Putin and looked out of step with French public opinion when he refused to welcome Ukrainian refugees with open arms, even as Le Pen’s party did.

Before the war, Zemmour was within touching distance of Le Pen but has since lost four percentage points to fall to 11 per cent in polls of first-round voting intentions. With the vote only two weeks away, Le Pen has added to her lead to reach 19 per cent, which means she could make the run-off if she can hold off a late challenge from far-left candidate Jean-Luc Mélenchon on 14 per cent.

Pierre-Hadrien Bartoli, a Harris Interactive pollster, expressed doubt that the far-right hopeful could regain momentum. “So far in his yo-yo of a campaign, Zemmour has been able to climb back up by returning to his core message of French identity being in peril,” said Bartoli.

That might not work this time, given how the war has reshuffled the agenda. “It does not seem simple for him,” he added.

Zemmour’s political allies, including a band of defectors from Le Pen’s Rassemblement National and her charismatic niece and rival, Marion Maréchal, still think he can catch up.

The campaign has raised €12mn from donors and 120,000 people who have joined the new Reconquest! party, said one of his strategists. That is a considerable sum for a new candidate, although short of the €15mn Macron raised for his outsider campaign in 2017. “There is still everything to play for,” said Guillaume Peltier, who left the centre-right Republicains party to join Zemmour.

At the rally, Valentin, a 32-year-old online content manager who declined to give his surname, said economic issues were secondary for him. “Zemmour is the person the right has been waiting for. Immigration is not the only problem in this country but this is about the essence of the French people.”

To rally voters, volunteers have fanned out across France and have knocked on some 15,000 doors in areas identified by the campaign’s data scientists as being fertile territory because of past voting patterns.

Critics say Zemmour, who was recently convicted of inciting racial hatred, has turned to shock tactics to try to pull voters’ attention back to his turf.

Zemmour last week called for France to create a new “ministry of remigration” that would aim to expel 1mn illegal immigrants and foreigners who have committed crimes or are suspected of terrorist sympathies. But the hardline proposal barely created a ripple on the campaign trail, showing how Zemmour can no longer set the agenda as he did in the autumn when he was second in the polls.

He then laid out his full programme at a press conference including a pro-business agenda that would lower taxes, cut regulations and create more high-quality industrial jobs. That more liberal positioning sets him apart from Le Pen, who espouses a bigger role for the state to protect working-class people.

On Friday, accompanied by a crowd of television crews, he visited an area of northern Paris known as “Crack Hill” where drug addicts camp out and dealers work openly, pronouncing it an “apocalypse” that would spread everywhere in France in the next decade. His bodyguards had to evacuate him when people started throwing projectiles his way.

Even if he does not make the run-off, Zemmour will have had a big influence on the campaign, analysts said, by pushing candidates such as the Républicain’s Valérie Pécresse into harder positions on immigration and crime, and by making Le Pen seem moderate in comparison, capping her long effort to “detoxify” her party.

Pascal Perrineau, a professor at Sciences Po university, said Zemmour’s rise was a sign of how the far-right was not a monolithic entity. “There are different nuances of the far-right,” he said, adding that Marine Le Pen’s current was nationalist and populist, while Zemmour and Maréchal’s was more focused on identity politics.

Zemmour’s push at every turn of the “great replacement theory”, which posits that Muslim immigrants will overwhelm Europe’s native inhabitants, has made the once fringe idea part of the public debate, with television commentators and politicians including Pécresse now using it.

He has also weakened the decades-old barrier between the traditional centre-right and the far-right — known as the cordon sanitaire — which aimed to protect the republic from the movement’s racism and xenophobia.

Should Macron win the election, political analysts predict a reshuffling of the decks on the right and far-right will ensue, potentially leading to a stronger nationalist, populist movement under a new leader. Marine Le Pen signalled in a recent interview with Journal du Dimanche that if she lost she was not likely run for a fourth time, leaving Zemmour and her niece Maréchal as contenders.

“Zemmour might lose but the movement he started will continue,” said Christèle Lagier, a political scientist from Avignon University.