EU seeks to improve ties with India despite disagreements over Russia 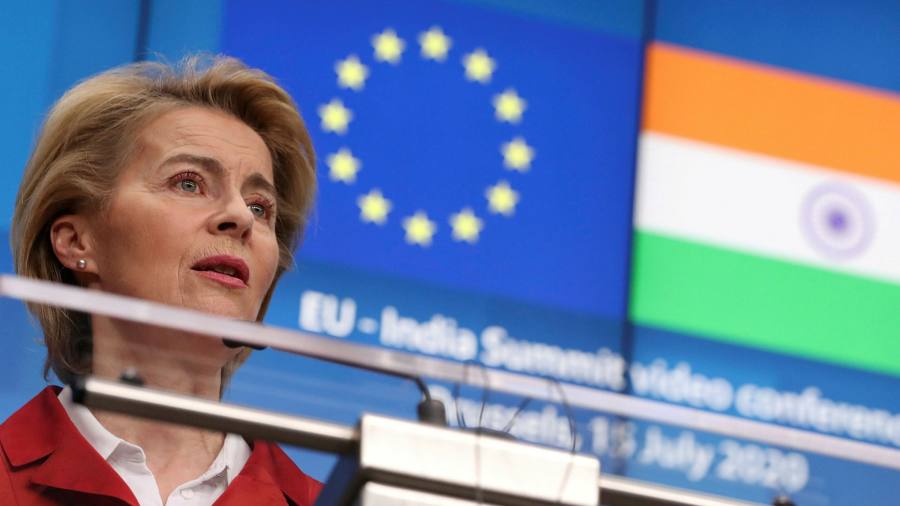 European leaders — the UK’s Boris Johnson today, the EU’s Ursula von der Leyen on Sunday — are visiting India at a time of simmering anxiety over its relations with Russia. We’ll explore the stakes and what goodies are on offer in terms of free trade deals.

In Ukraine, Charles Michel, European Council chief, held a joint press conference with Volodymyr Zelensky, Ukraine’s president, yesterday, pledging help to “win this war” against Russia. Separately, the US announced that allies have shipped some 20 warplanes and spare parts to Ukraine.

In the field of French politics, it took some stamina to watch the entire debate last night between Emmanuel Macron and Marine Le Pen — which felt eerily similar to the one five years ago. Le Pen was weak on facts and figures and said she no longer wanted France to leave the EU but rather reform it from within. Macron grilled her on her Russia ties and myriad policy inconsistencies and largely held the upper hand.

Meanwhile, in Brussels, negotiations between EU governments, the commission and the European parliament have started on regulating greener and more efficient batteries, which are one of the core elements of the bloc’s green transition. We’ll bring you up to speed with the latest and what to expect going forward.

The EU has been deeply disappointed by India’s fence-sitting when it comes to the Ukraine war, but Ursula von der Leyen is determined to prevent differences on the topic from overshadowing her trip to Delhi next week.

The commission president will travel to India for the first time since taking over her post in 2019, flying on Sunday to speak at the Raisina Dialogue (an annual conference on geopolitics) and to meet Narendra Modi, India’s prime minister, writes Sam Fleming in Brussels.

The political background to the visit is far from auspicious. India has declined to condemn the Russian invasion and abstained from UN votes condemning its actions, prompting Joe Biden, US president, to single out India last month as having a “somewhat shaky” stance in contrast to its other ‘Quad’ partners, Australia and Japan.

The approach stems in part from India’s historically close relations with Moscow, which date back to the cold war, as well as its heavy reliance on the Russian-made military hardware and its attempts to delicately balance its partnerships around the world.

But after an ill-humoured summit between the EU and China earlier this month, the tone of von der Leyen’s talks with Modi is likely to be a much more constructive one. The president will raise the Ukraine war, and the need for the EU sanctions regime to be respected, but there is, said one EU official, also a recognition that the issue is not “existential” for India in the way it is for Europe.

The thrust of her trip will instead be on achieving more of the “unrealised potential” in the partnership between the EU and India, in areas including digital innovation, green investment, security and co-operation in the Indo-Pacific region.

Most importantly, the meeting will reflect a marked, positive shift in the mood when it comes to the chances of a trade agreement between the sides.

The EU and India are gearing up for new trade talks after agreeing a year ago to revive a long-stalled effort at striking a comprehensive trade deal. While the announcement was greeted at the time with scepticism among some trade analysts, officials have more recently become more cautiously optimistic that progress is possible.

That is in part because of what appears to be a somewhat heartier appetite on India’s part to strike deals, as evidenced by its recent signing of an interim trade agreement with Australia. New Delhi also is engaging in trade negotiations with the UK, and will hold discussions with Boris Johnson, the beleaguered prime minister, when he visits India today.

This does not mean that it will be by any means easy for India and the EU to strike a comprehensive trade agreement.

Unlike post-Brexit Britain, the EU feels no need to clock up fresh trade deals at any price, and it will shoot for a more ambitious and wide-ranging partnership than the India-Australia one. Hopes of a trade deal have flourished in the past only to be dashed: Brussels and New Delhi slogged through more than a dozen negotiating rounds between 2007 and 2013 before declaring a stalemate.

But next week’s talks reflect an appetite in Brussels to deepen co-operation with New Delhi on multiple fronts, differences over Russia notwithstanding.

German producer prices surged at their fastest pace in at least 73 years, raising concerns about stagflation. On Tuesday, the IMF cut its 2022 growth forecast for Germany to 2.7 per cent, the biggest downgrade in advanced economies, highlighting the exposure of Germany’s energy-intensive manufacturing sector to the war in Ukraine.

How will the EU fuel its lofty ambitions to cut emissions 55 per cent by 2030? Batteries are one, important, part of the answer and are in the spotlight in Brussels this week after negotiations over the EU’s updated battery regulation kicked off yesterday, writes Alice Hancock in London.

Rules proposed by the commission aim to make batteries longer-lasting, easier to recycle and more sustainably sourced. Mining lithium for batteries in Chile, the world’s biggest lithium producer, is draining fresh water from the already arid Atacama Desert, for example.

Battery use is set to increase dramatically — the World Economic Forum expects demand globally to be 14 times greater in 2030 than it is today — and the EU’s 2006 directive is wildly out of date. Electric vehicles are not mentioned once.

With more than 700 pages of proposals to wrangle over, commission officials have told NGOs that the trilogue negotiations could roll on until the autumn.

Parliamentarians are pushing to speed up the introduction of compulsory targets for recycling battery materials and for e-scooter and e-bike batteries to be included in the rules. The council has pushed back on the timeline arguing that industry needs time to catch up.

Poland and Germany, two of the world’s biggest exporters of batteries, are watching closely.

The discussions will be a test case for the commission’s ‘sustainable products initiative’, an effort to ensure more consumer goods are reused and recycled, for which initial proposals were published last month.

Rita Tedesco, senior programme manager at the environmental group ECOS, said that the regulation must be ambitious if the EU wants to be a climate leader as it claims: “We are a single market which will then have rules that mean that everyone who needs to export their product to Europe will need to comply . . . It is a powerful tool.”

I think it’s very hard to see how the Ukrainians can negotiate with Putin now, given his manifest lack of good faith . . . How can you negotiate with a crocodile when it has your leg in its jaws