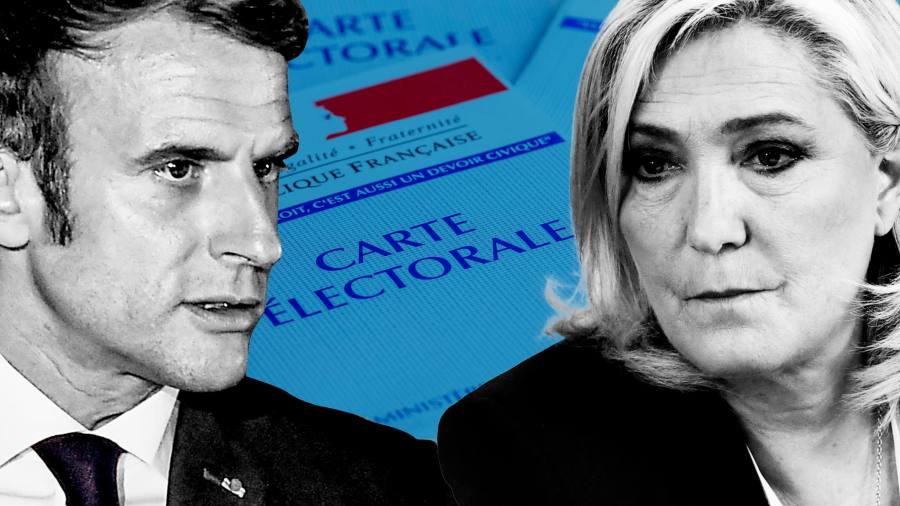 French voters began casting their ballots on Sunday in the first round of a presidential election in which far-right leader Marine Le Pen is mounting a strong challenge to the incumbent Emmanuel Macron.

A victory for Le Pen, who is sceptical about the EU and Nato and has in the past boasted of her ties to Vladimir Putin, would send shockwaves across Europe and the world at a time when Russian forces are waging war on European soil in Ukraine.

If she becomes president, Le Pen has promised to introduce more protectionist economic policies that favour French industry, crack down on Islamists and immigration, and forbid women to wear the veil in public on the grounds that it is an “Islamist uniform”.

“Never has the prospect of a real change been so close,” she told cheering supporters in her final rally before polling day, held on Thursday in the far-right stronghold of Perpignan, where her former partner Louis Aliot is mayor. Campaigning was not allowed the day before polls opened.

Le Pen hopes to emulate the nationalist triumphs of the UK’s referendum to leave the EU in 2016 and the US election victory of Donald Trump later that year. She lost to liberal internationalist Macron in the 2017 French election.

At midday Paris time on a sunny spring Sunday, just over a quarter of voters had cast their ballots, slightly lower than in the first rounds of the two previous presidential elections in 2012 and 2017.

But the turnout was above that of the record low year of 2002, when Le Pen’s father Jean-Marie Le Pen staged the far-right movement’s first big upset by qualifying for the second round and eliminating the Socialist prime minister Lionel Jospin.

Macron’s predicted margin of victory this year has been steadily squeezed in recent weeks, sending jitters through financial markets about the prospect of a Eurosceptic nationalist taking charge of the EU’s second-biggest economy.

“Although she has ditched any explicit ‘Frexit’ plans, Le Pen would still completely transform France’s position within Europe,” Jessica Hinds, senior Europe economist at Capital Economics, said in a note on Friday.

“At best, she would undermine and frustrate European policymaking and at worst would seek to dismantle EU structures from the inside.”

Only two candidates will qualify for the second round on April 24. If as expected they are Macron and Le Pen, polls give the incumbent president the edge with a 53-47 lead over his rival — much narrower than his 66-34 victory in 2017.

In all, 12 candidates are on the ballot for the presidential election, including five from the far left and three from the far right.

Two candidates who generated early momentum in the campaign — Eric Zemmour, the anti-immigration far-right television polemicist, and Valérie Pécresse, winner of the primary for the conservative Les Républicains party — have since sunk back in the opinion polls to below 10 per cent of first-round voting intentions.

Anne Hidalgo, the Socialist party candidate and mayor of Paris, is expected to receive just 2 per cent of first-round votes, according to the polls.

This means neither of the two political movements that gave France its presidents from 1958 until the arrival of Macron — the Gaullist centre-right party and the Socialists — have much chance of seeing their candidate elected on April 24, though they may do better in the National Assembly elections in June.