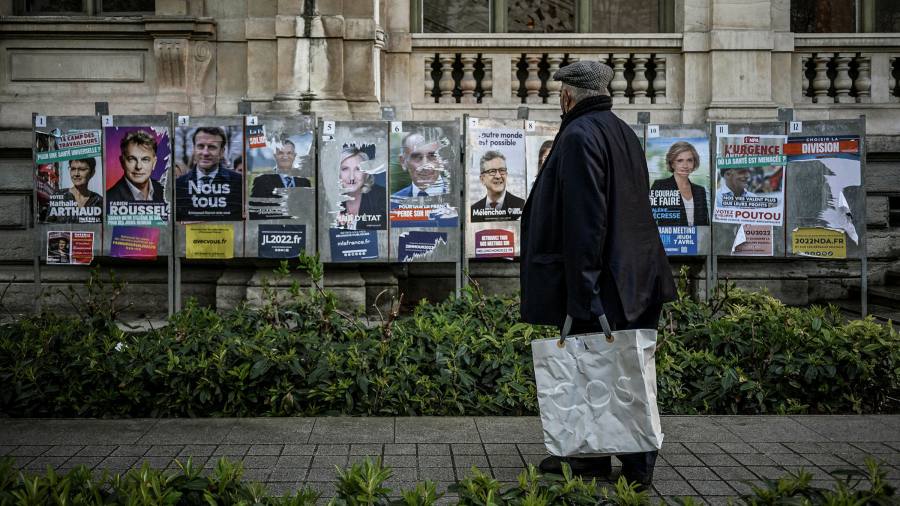 The aftermath of Emmanuel Macron’s re-election has turned into a fight for survival for the once-powerful political movements that gave France most of its postwar presidents.

The centre-left Socialist party and the conservative Les Républicains were crushed in this month’s presidential vote. Now they risk being torn apart as politicians scrabble for alliances to compete in the legislative elections in June.

Socialism itself was at stake, said François Hollande, the Socialist former president, as he rejected a proposal on Thursday to include his party as a junior partner in a “popular union” dominated by the far-left La France Insoumise (France Unbowed) party of Jean-Luc Mélenchon.

The 70-year-old Mélenchon has emerged as the leader of one of the three putative political alliances expected to dominate the National Assembly elections in six weeks, after he scored 22 per cent of the votes in the first round of the presidential contest, just behind far-right leader Marine Le Pen with 23 and Macron with 28.

Hollande said a lopsided left-green alliance controlled by the Eurosceptic, anti-capitalist Mélenchon would call into question Socialist commitments to the EU and Nato and to a viable economy. “It challenges the very history of Socialism,” he told Franceinfo radio. “We need to negotiate, but we cannot just disappear.”

There has been a similar feeling of alarm among the Gaullists of the LR, as moderate members consider joining Macron’s embryonic centrist alliance for the National Assembly elections, while its rightwingers consider defecting to Le Pen’s Rassemblement National.

LR leader Christian Jacob insisted that the party must remain independent and its members, including parliamentarians, should stay put. “We are preparing for the legislative elections, without being mixed up into Le Pen-ism or Macronism,” he told Le Figaro in an interview.

François-Xavier Bellamy, a philosophy teacher and LR member of the European parliament, said potential defectors were “noisy but few in number” and an alliance with Macron would be “very dangerous for the right and for democracy in general”. The party “should stay independent and be in opposition” to argue for its traditional themes of fiscal prudence and law and order, he added in an interview.

The problem for both the LR and the Socialists is that their candidates — Valérie Pécresse, who runs the Ile-de-France region that includes Paris, and Anne Hidalgo, Paris mayor — did so badly in the presidential election that they failed to reach the 5 per cent threshold required for the state to pay a substantial share of their campaign expenses.

“The Socialists and the LR have the same problem. On their own they have no chance to survive — they need to mingle with other parties,” said Vincent Martigny, politics professor at the University of Nice.

“We’re really in the course of a political realignment in France. The three main candidates in the presidential election are trying to create three blocs, but their make-up is still to be decided.”

One person involved in the LR campaign said the party believed it could retain a significant number of its 101 seats in the assembly: “Our nightmare would be ending up like the Socialists, so we have to fight to avoid that fate.” The Socialists’ number of seats plummeted from 280 to 30 in the 2017 legislative election.

There are financial and political motives for parties to run as many candidates as possible, even if they have little chance of winning, because public financing for the next five years will depend on the results. Any party that runs in more than 50 constituencies will be allocated funds based on votes won in the first round, and for each deputy elected they get €37,000 a year.

While Socialists, Greens and Communists are all wary of what Green party national secretary Julien Bayou calls the threat of a “hegemonic” leftwing alliance under Mélenchon, and the LR fights to survive as an independent party of the right, Macron has momentum on his side after his victory over Le Pen in the second round of the presidential poll.

Yet even for Macron and his La République en Marche party, the legislative elections will not be as easy as after the start of his first term as president in 2017. Then he was a newcomer and his party and its allies won a National Assembly majority that allowed his government to make laws and implement economic reforms as it pleased.

An Elabe opinion poll on Wednesday found that 61 per cent of the French thought it preferable for there to be a majority in the National Assembly that opposed him, with only 39 per cent hoping for a parliament that favoured him — broadly the opposite of the popular view five years ago.

So Macron is trying to make sure he can secure control of the assembly in the two rounds of voting on June 12 and 19.

After tilting to the centre-right with his tax cuts and the choice of his first two prime ministers — Edouard Philippe and the incumbent Jean Castex — Macron is courting the left and the greens while trying not to alienate conservatives. He has said his next prime minister — expected to be named next week — will be “someone who understands social and labour issues, environmental issues and economic issues”.

On the far-right, the unsuccessful presidential candidate Eric Zemmour has been lobbying Le Pen’s party for an alliance so as to improve their chances of pushing an anti-immigration agenda in parliament, but has met resistance. Le Pen’s side has already said it will oppose Zemmour wherever he runs.

“We’ve held out a hand because we want to influence the direction of the country, but it looks like they just want to kill us off,” said a Zemmour strategist.