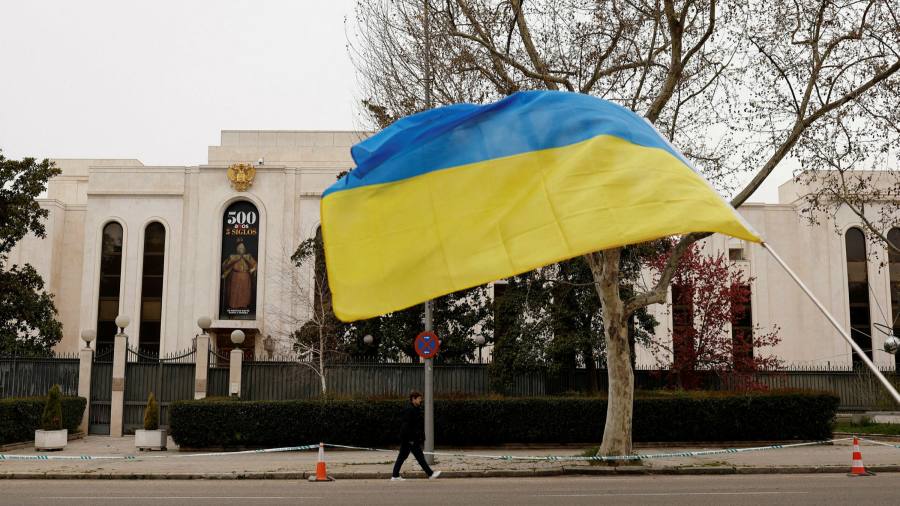 The mass expulsion of Russian officials from embassies across Europe accelerated on Tuesday amid outrage over Moscow’s aggression in Ukraine and growing concern about spies masquerading as diplomats.

Italy, Spain, Denmark, Sweden and Estonia announced the expulsion of a total of 80 Russian diplomats, following similar moves in recent days by Germany, Poland and Slovakia.

The moves took the number of Russian diplomats ejected from the EU since the invasion of Ukraine to at least 300, according to Financial Times calculations. Lithuania on Monday expelled the Russian ambassador to the country in protest at the apparent deaths of Ukrainian civilians at the hands of Russian troops.

The large-scale, co-ordinated expulsions represent a further effort to isolate Russia internationally and will close down more communication channels between Moscow and the EU.

They also mark the biggest spate of expulsions of Russian diplomats since the poisoning in 2018 of former Russian spy Sergei Skripal and his daughter in the UK, after which western countries ejected more than 100 Russian diplomats at London’s urging.

Cumulatively, the number of Russian diplomats now sent home from western countries in recent days far exceeds even the biggest of the tit-for-tat expulsions that were frequent events at the height of the cold war.

Nathalie Tocci, director of the Istituto Affari Internazionali in Rome, called the expulsions “late in coming” and a critical move in a confrontation with a rival using sophisticated disinformation campaigns.

“These were not just diplomats but they were there with a mission or a purpose that had to do with filtering into all the nooks and crannies of the fragilities of our systems,” Tocci said.

“It is not about spying in the sense of finding out confidential, classified information — that is just the tip of the iceberg,” she said. “It is all-pervasive work both in the public and private sphere that is aimed at creating and legitimising a particular kind of narrative.”

The latest action against the Russian diplomats came as EU finance ministers met in Luxembourg to discuss imposing even harsher sanctions on Moscow following the apparent killing of Ukrainian civilians by its troops in the Kyiv suburbs.

Dmytro Kuleba, Ukraine’s foreign minister, said he had spoken to António Guterres, UN secretary-general, and urged him to make use of mechanisms “to collect evidence and hold Russian war criminals to account”.

“This decision . . . was made necessary by reasons linked to our national security,” the official Italian news agency ANSA quoted Di Maio as saying. He added that the expulsions were spurred by “the current crisis situation caused by the unjustified attack on Ukraine by the Russian Federation”.

Denmark separately announced that it was expelling 15 Russian diplomats, with Jeppe Kofod, foreign minister, calling them “a threat to our national security”.

“It’s in our mutual interest to maintain diplomatic ties, but we will not accept Russian espionage on Danish soil,” Kofod wrote on Twitter.

Sweden also announced the expulsion of three Russian diplomats from the country. A senior Swedish security official said last year: “We know that every third Russian diplomat works under what we call ‘diplomatic cover’ and actually works for one of Russia’s intelligence services.”

Estonia and Latvia both said they were closing two Russian consulates each as of April 30, and expelling 14 and 13 staff, respectively.

Russian diplomats turned away from their postings in recent days include 40 from Germany on Monday, 45 from Poland and 35 from Slovakia.

The Kremlin said on Tuesday that the expulsion of Russian diplomats narrowed the scope for diplomatic communication during already unprecedented times, Russian news agencies cited spokesman Dmitry Peskov as saying. He described the decisions as “a short-sighted move”.