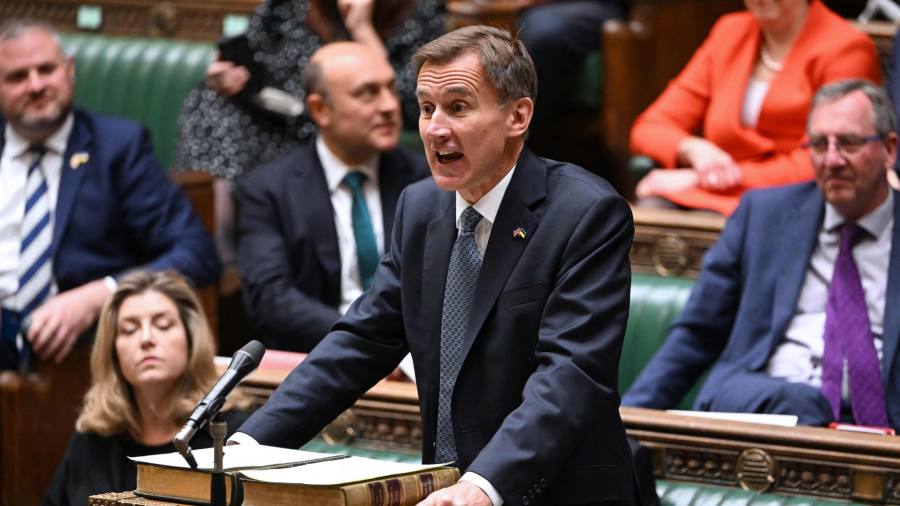 This article is an on-site version of our Inside Politics newsletter. Sign up here to get the newsletter sent straight to your inbox every weekday.

Good morning. Taxes are going up (next April and thereafter for some time). There will be real-terms cuts to most spending departments thanks to inflation in the short term and even sharper ones after the next election.

Much more on that to come, but some thoughts on the big picture politics in today’s note.

Today’s Inside Politics is edited by Abby Wallace. Follow Stephen on Twitter @stephenkb and please send gossip, thoughts and feedback to [email protected].

God, let me cut spending (but not yet)

During his first bid for the Conservative leadership, Rishi Sunak’s pitch was that he would cut taxes, honest, but only once he had cut spending. Jeremy Hunt’s autumn statement is similar: he will cut spending, honest, but only after the next election. Taxes will start to rise right away, but both the state pension and in-work benefits will rise to shield households from some of the economic shock. And there will be sharp cuts to infrastructure spending.

Much of the rhetoric and the political style owed a debt to George Osborne, who is back in Downing Street in an unofficial capacity advising Sunak and Hunt. One aspect of that was the return of an old David Cameron favourite: Hunt has announced that Patricia Hewitt, a former health secretary under New Labour, and Michael Barber, who advised Tony Blair on education in the 1997 to 2001 period, will assist in reviews about improving NHS efficiency and skills policy respectively.

These reviews have something to recommend them in pure policy terms, in that they bring in institutional memory and (in theory, at least) broaden the political constituency that supports whatever emerges from them. But they are also a great way to disorient your opponent and make you look reasonable.

That said, the actual content of the Budget was more Alistair Darling in 2009 than George Osborne at any point from 2010 to 2016. Like Darling, Hunt is using the automatic stabilisers of welfare policy to shield households from some of the economic consequences of the crisis. Like Darling, he is using cuts to capital spending to signal his willingness to deliver austere budgets while pledging that worse is to come after the election.

Like Darling, Hunt is hoping that something will come up which means he won’t have to do all of these things. And like Darling, when the time comes, it will probably be the other political party’s problem anyway.

Here’s the most important chart in British politics:

Real household disposable income per person is set to fall by 4.3 per cent in 2022-3, the largest fall since ONS records began in 1956-7. That is then followed by the second largest fall in 2023-4. It will be only the third time since 1956-7 that disposable incomes have fallen for two consecutive years: the last time this happened was in the aftermath of the global financial crisis.

This is, in a word, awful. Awful for households, awful for businesses, awful for society as a whole, and awful, electorally, for the government.

We should assume two things: the first, as is always the case when a governing party fears that its next meeting with the electorate will end badly, is that we should assume that this parliament will run as long as possible. As I’ve noted before in this email, the absolute latest that the next election can take place is 28 January 2025. That date would of course be highly disruptive over the Christmas period and is therefore unlikely: but not impossible. In any case, the likely landing zone is sometime from November 2024 to January 2025, I would think.

The second thing is that it is highly likely the Conservatives will fail to be re-elected, and if they do, it will be with a sharply reduced parliamentary majority. There is essentially no prospect that a Conservative government with a smaller majority than this one will be able to deliver the sharp cuts that Jeremy Hunt’s Budget promises it will, and no prospect that a Labour government of any kind will want to. Whatever Labour may say between now and the next election, the reality is that they will end up having to sharply increase taxes. If the Conservatives end up getting back into office, they will almost certainly end up choosing tax rises over spending cuts too.

Recent events have led to me to re-read Emily St John Mandel’s The Glass Hotel, one of my favourite novels. It tells the story of, among other things, a Madoff-style fraud.

However you spend it, have a wonderful weekend.