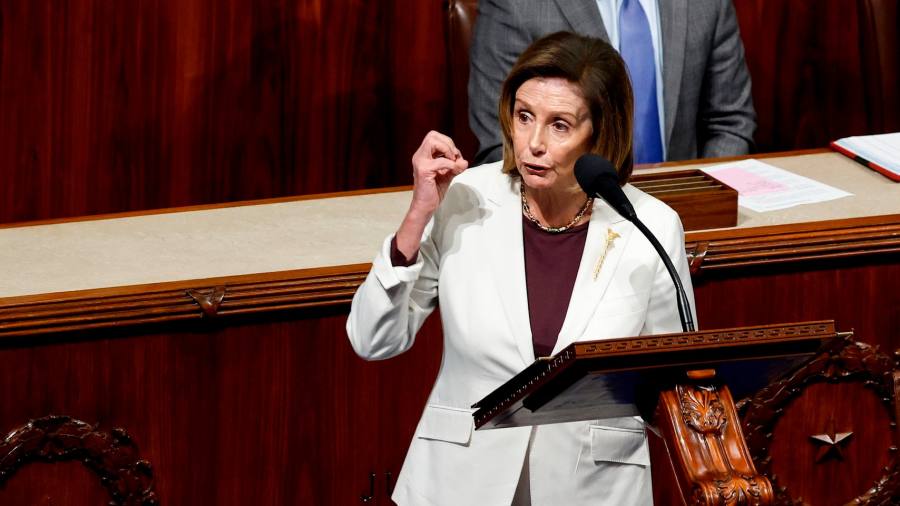 One of the most striking images of Nancy Pelosi’s storied career was when Hank Paulson, the Republican Treasury secretary, went down on bended knee in the White House to beg her to save the US economy.

The fact that it was Pelosi, a Democratic Speaker, to whom George W Bush’s henchman turned to bail out the US in the midst of the 2008 financial meltdown will not be lost on history. John Boehner, the Republican House leader, had no control of his caucus. Pelosi, who led a far more fractious party, never lost her grip on hers. The detail hardly matters (the bailout was the $700bn troubled asset relief programme); with Pelosi it was about execution. She may be the last Speaker from either party to assert such iron will.

Pelosi’s retirement as the Democratic Party’s longest-serving leader — spanning 18 of the most turbulent years in America’s political history — highlights two aspects of today’s Washington. The first is that she is likely to be replaced as Speaker by the Republican, Kevin McCarthy, who lacks almost any ability to lead his caucus. Like Pelosi, who at times had a majority of just three in the past two years, McCarthy will lead an unruly party with a tiny majority of about five or six seats. That is where the similarity ends.

“Pelosi is the strongest congressional leader I’ve ever seen,” said Norm Ornstein, a veteran congressional scholar at the conservative American Enterprise Institute. “McCarthy is the weakest.”

Until Kamala Harris was sworn in as vice-president on January 20 last year, Pelosi was the most senior female leader in US history. Her tenure is unlikely to be surpassed. She was only the second Speaker, after Sam Rayburn, the legendary mid-20th century Democratic leader, to regain the gavel after having once lost it. That was in 2018, when Pelosi’s “blue wave” midterm election deprived Republicans of control of Congress halfway through Donald Trump’s presidential term. It is perhaps fitting that Pelosi is stepping down as Democratic House leader following a widely anticipated “red wave” that dissolved before it reached the shore.

Through a combination of steeliness and an ability to co-opt, Pelosi managed to fend off challenges from the infamous “squad” of four leftwing Democrats that included the controversial Ilhan Omar and Rashida Tlaib. In the past two years she pushed through legislation, including the $1.9tn Rescue Act, and the $700bn Inflation Reduction Act, with unanimous Democratic support and no Republican votes. McCarthy will struggle to unite a party that spans a handful of increasingly isolated moderates and incendiary figures such as Marjorie Taylor Greene and Lauren Boebert.

The other debate highlighted by Pelosi’s retirement is over her party’s gerontocratic character. At 82, she is two years older than Joe Biden, who will turn 80 this weekend. Though Pelosi has a warm relationship with the president, who called her “the most consequential legislator in American history”, her decision to step down is likely to sharpen the debate about whether he should run again — a decision Biden says he will make in January.

Pelosi’s decision was partly motivated by the attack on her 82-year-old husband, Paul Pelosi, who was assaulted in their San Francisco home, and hospitalised with a fractured skull, a few days before this year’s midterm elections. The fact that many Republican leaders, including Donald Trump, failed to express their sympathy may have played a hand in their party’s surprisingly anaemic performance.

It was notable in Pelosi’s goodbye speech in Congress on Thursday that McCarthy, among others, was absent. When the Capitol was stormed on January 6 last year, the mob’s first target was Pelosi, whose office was ransacked. The daughter of a Baltimore Democrat, Pelosi became a hated symbol of San Francisco liberalism for the conservative right — a not wholly unfair reputation that played some part in alienating former blue-collar Democrats. But she was also a figure for whom many had grudging respect.

Newt Gingrich, the most powerful Republican Speaker of modern history, said Pelosi had achieved the impossible by pushing through bills such as the Affordable Care Act, Barack Obama’s signature healthcare reform, which some believe should have been called “Pelosicare” (not “Obamacare”). Her stewardship of the January 6 investigative committee into last year’s Capitol storming also played a role in averting disaster for her party last week and arguably for the US republic too.

“Last week, the American people spoke, and their voices were raised in defence of liberty, of the rule of law and of democracy itself,” Pelosi told lawmakers on Thursday. It was a fittingly dramatic summary to a speakership that has changed US history.