The horror of the Kramatorsk station attack 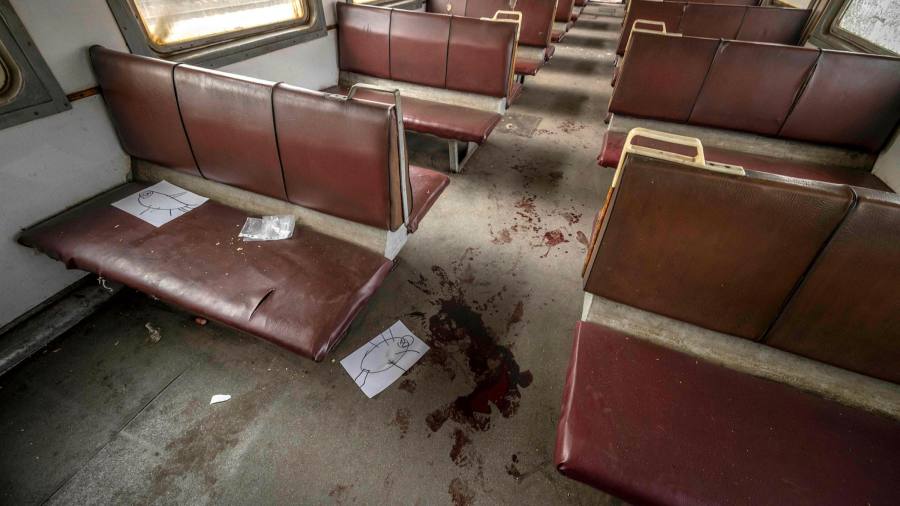 The Russian missile attack on Kramatorsk railway station that killed at least 50 people, five of them children, is the most horrifying atrocity in a week that has brought news of many others. It defies belief that Moscow’s forces were unaware the station was packed with civilians seeking to flee eastern Ukraine — as the Kyiv government had urged — before an expected Russian assault. It will fuel suspicions that Russia is targeting the civilian population to sow fear and break resistance, after the setbacks its army has experienced in six weeks of war. If so, this is a decision that can only have been taken higher up the command chain.

Russia, to be clear, does not have a monopoly on alleged war crimes. A video posted online this week appeared to show Ukrainian soldiers executing captured Russian troops. Kyiv’s response, however, has not been blanket denials, but a pledge to investigate. It must do so and ensure justice is enforced.

The reaction of Moscow officials and media to the attack on Kramatorsk, by contrast, followed a pattern of obfuscation, denial and outright fiction. Russia’s defence ministry initially said it had used high-precision rockets to hit three railway stations in the Donbas that it said were hosting “Ukrainian reserves’ armaments and military equipment”. Once the extent of civilian casualties became clear, the ministry denied being behind an attack and said only Ukrainian forces used this type of missile. Russia TV began to report that Ukraine’s own troops had attacked the station as President Volodymyr Zelensky did not want residents from the east to leave Kramatorsk.

The different versions echoed the conflicting stories Russia used to try to distance itself from an older outrage — the downing in 2014 of Malaysia Airlines flight MH17 over east Ukraine, which killed 298 people. And when reports emerged this week of mass killings in Bucha, near Kyiv, Russian TV told viewers variously that the deaths resulted from accidental or deliberate actions by Ukrainian forces, and that Nato had staged the incident — using actors and corpses from elsewhere — to frame Russia for a massacre.

Multiple, contradictory falsehoods can reflect a rush to come up with a plausible alternative narrative — but Moscow propagandists seem to deploy them also as a strategy to confuse and bewilder. The corrosive effect of relentless media propaganda portraying the war as a just fight against a Ukraine run by “Nazis” can be seen in poll findings. Russian polling that found four-fifths of Russians supported Putin’s invasion may be skewed by the fact that it took place in wartime in a repressive regime. But a survey specially designed to correct for such factors still suggested more than half were in favour.

Western democracies are rightly reacting to Russia’s alleged war crimes by amassing evidence for potential future tribunals. They have stepped up economic sanctions this week after revelations of the massacre in Bucha — the EU and others are blocking Russian coal imports, and the US tightening sanctions on Russian banks and barring new investments in Russia. Nato, meanwhile, has pledged heavier weaponry to Ukraine to help it confront a new onslaught on the Donbas.

However, countering the insidious effect of Russia’s media propaganda is also vital to western efforts to squeeze the Kremlin’s ability to sustain its war. That means doing everything possible — through government, media and civil society initiatives — to combat Moscow’s malicious disinformation and get the truth to the Russian people. If not, mounting falsehoods may end up being used to justify ever worse atrocities.