The Marshall Plan is no longer niche history 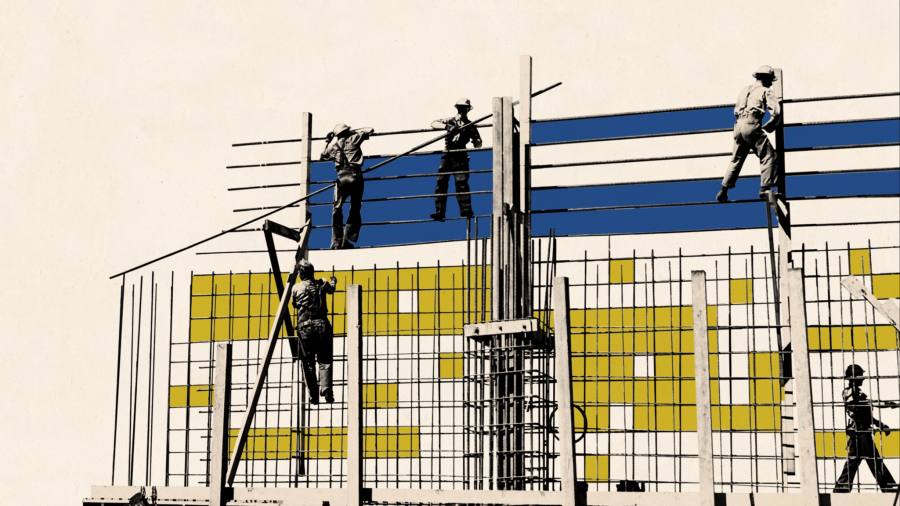 At the beginning of 2022, experts on the Marshall Plan were not in huge demand. Most people did not believe an entire European economy might suddenly be smashed apart by conflict, so the postwar reconstruction programme spearheaded by US secretary of state George Marshall in 1948 occupied a firmly retro niche. The details were, says Adam Tooze, a history professor at Columbia University and an expert on the plan, a “pretty geeky issue”.

But the war in Ukraine has caused the world, particularly the west, to look to the past for answers. The British prime minister Boris Johnson has called for a Marshall Plan to help Ukraine. So too has Ukrainian billionaire Rinat Akhmetov, who has vowed to rebuild the besieged city of Mariupol. In the US, meanwhile, a recent report by Tooze has been circulating among policymakers and Wall Street financiers. In Washington last week, where meetings of the World Bank and IMF were in full swing, I repeatedly heard the plan name-checked. Marshall Plan history is no longer a niche.

Is this premature? My first reaction was to think so. Fighting continues in Ukraine, and not even the most optimistic of western officials think it will end soon. “My best guess is that we will end up with a long, frozen conflict, like Georgia,” a seasoned former western military leader told me.

Yet there are plenty of explanations for why the Marshall Plan debate needs to happen now. One is that western allies want to act as though they assume Ukraine will win the war. Another is that they want to capitalise on the current goodwill towards the country because there is a chance that this could crumble in a media and political culture with a short attention span.

What’s more, it takes time to organise resources, and delays are costly. The original Marshall Plan was a case in point: the fact that it finally emerged in 1948, three years after the second world war ended, “came too late… to help European countries with their immediate post-war reconstruction problems”, according to the Centre for Economic Policy Research, a European think-tank.

Financiers know that if a modern Marshall Plan does materialise, there will be contracts to chase

Today, western financiers are keen to jump into reconstruction. The global financial system is awash with cash looking for a home. And while infrastructure funds are unlikely to rush into Ukraine while missiles are raining down, they know that if a modern Marshall Plan does materialise, there will be contracts to chase. This has echoes of 1948 too, as US aid money then was mostly used to buy goods from American companies.

Lastly, talk of a new Marshall Plan appeals to western policymakers keen to reset in a wider sense. As Tooze notes, the real significance of the 1948 plan was not its rather modest impact on growth, but the fact that it was “a tool for driving European integration” and, in the long run, the creation of the EU. “It was not the sheer scale of the Marshall Plan that was crucial but its role in breaking bottlenecks — both economic and political,” he says.­

Last week in Washington, people told me this could happen again. A new Marshall Plan involving America and Europe could variously foster western solidarity, give Europe a new cohesion and even create a template for how to “reset” a state that would be a model for Europe. The idea has become like an idol in a shrine, capable of symbolising numerous, sometimes contradictory hopes.

Will those hopes ever be fulfilled? Don’t bet on it happening soon. One big, obvious stumbling block is cost. The original Marshall Plan pumped more than $13bn into Europe, about $160bn in today’s money. Economists estimate that Ukraine will need anything between $220bn and $540bn for its reconstruction, more if the war drags on. Whether western voters or politicians will back that is anyone’s guess. What may give some policymakers pause, Tooze notes, is that when western aid has been handed to Ukraine in the past, it has not necessarily produced particularly effective results due to corruption and low productivity.

Then there is the slippery question of who should run a Marshall Plan. In 1948, America was so confident that it had no qualms about putting the name of its own secretary of state on the plan and organising it. But in the Washington conversations I heard last week, nobody imagines the White House alone jumping into this role today. Instead, many observers hope that Europe will take the lead. But does it have the authority to play a co-ordinating role? Where would this leave the IMF? Or the US? Can anybody actually take charge?

Right now, nobody knows. And given the uncertain direction of the war, nothing can be taken for granted. The Marshall Plan remains history. But that history also offers a hint of solace.

Gillian will appear at the FTWeekend Festival on May 7 in Washington, DC. Limited passes available at ftweekendfestival.com