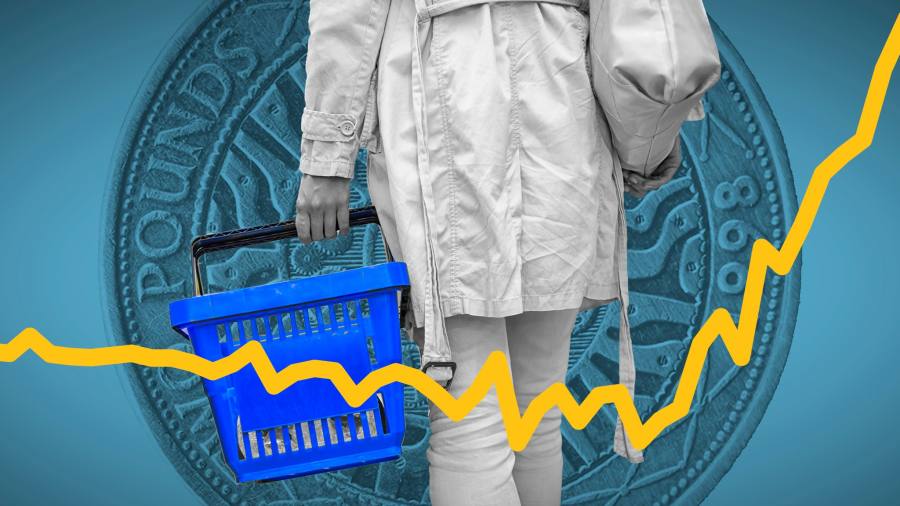 The risk of a prolonged period of stagflation in the UK has increased after consumer prices surged more than expected while economic growth slowed to a crawl.

Recent official and informal economic data have fallen short of analysts’ expectations, prompting many to warn about stagflation and even an economic contraction in the second quarter of this year.

It comes as some experts say the government has not done enough to help households with the cost-of-living crisis resulting from soaring consumer price inflation. Opposition parties in parliament have also accused chancellor Rishi Sunak of providing inadequate support to Britons grappling with rising energy and food bills.

Stagflation, which refers to slow growth in gross domestic product coupled to high inflation, is a relatively rare economic situation that puts great strain on consumers and businesses.

Last week, official data showed that consumer prices increased at an annual rate of 7 per cent in March, the fastest pace since 1992. By contrast, growth in gross domestic product slowed to just 0.1 per cent in February, and real wages, adjusted for inflation, contracted by 1 per cent.

The figures “highlight the risk of a stagflation-like episode for the UK economy”, said Paul Hollingsworth, economist at the consultancy BNP Paribas Markets 360.

Last month the Office for Budget Responsibility, the UK fiscal watchdog, predicted this year would mark the biggest squeeze on household real incomes since records began in the 1950s.

Near real-time informal data highlight how consumers are tightening their belts amid the cost of living crunch.

Trips to UK retail and entertainment venues, tracked by Google Mobility Data, have flatlined since mid-February. In mid-April, consumer confidence was down compared with last month, according to daily figures produced by Morning Consult.

In the first week of April, spending on credit and debit cards for so-called delayable goods, such as clothing and furnishings, was still more than 10 per cent below levels recorded before the coronavirus pandemic, Bank of England data showed. This is despite not being adjusted for inflation.

Most economists expect inflation to rise higher than 8 per cent in the second quarter, following April’s increase in the energy price cap for households set by the industry regulator, and possibly go higher when the ceiling is revised again in October.

James Smith, economist at ING, forecast the economy will contract by 0.2 per cent to 0.3 per cent in the second quarter because of the squeeze on household incomes and falling output in the health sector owing to reduced Covid-19 vaccinations.

Samuel Tombs, economist at Pantheon Macroeconomics, predicts a marginally larger contraction and expects the economy at the end of the year to be only 0.5 per cent larger than in February.

“With the economy already close to flatlining, it would not take much to produce a month or two of falling output as the squeeze on household real incomes intensifies,” said Ruth Gregory, economist at Capital Economics.

Thomas Pugh, economist at the consultancy RSM UK, raised the possibility of the economy falling into a recession — defined as two consecutive quarters of contraction.

“With growth forecast to average just 0.1 per cent in each of the remaining three quarters of this year, it would not take much of a rise in oil prices or a disruption in supply chains to push the UK into recession,” he said.

This could mean a lot more pain for consumers. Joanna Elson, chief executive of the charity Money Advice Trust, said one in eight UK adults reported having already gone without heating, water or electricity in the past three months.

At the end of March, about nine in 10 adults said their cost of living had increased, data from an ONS survey showed, with about half reducing spending on non-essentials or cutting energy use at home.

The fall in real wages could leave the average UK household about £900 worse off this year, according to calculations by Jake Finney, economist at the consultancy PwC. The lowest earners could see their incomes fall by as much as £1,300.

Savings accumulated during the pandemic should help limit the blow, but these are concentrated among the richer households, “and government intervention to support households with little or no savings has been relatively limited to date”, said Sandra Horsfield, economist at Investec.

However, she added that employment growth was already slowing and despite Sunak announcing some modest fiscal easing in recent months, “the fiscal stance for this year is restrictive overall”.

Many companies are also struggling with rising costs and waning demand for their goods and services. Input prices for businesses rose by an annual rate of 19 per cent in March, ONS data showed, in the highest monthly increase since records began 20 years ago.

Martin McTague, national chair of the Federation of Small Businesses, a lobby group, said the higher pace of input price growth compared with consumer price inflation shows “how small business owners are taking the hit directly — in a lot of cases, reducing their take-home pay or scaling back investment and expansion rather than passing on higher costs to customers”.

More than four in five managers do not think the government has gone far enough to help UK businesses with rising costs, according to research by the Chartered Management Institute, a professional body.

Anthony Painter, CMI director of policy and external affairs, said businesses were being squeezed as “they face a potential downtick in wider consumer confidence, and higher prices for materials, supply chain issues and higher production costs”.

Sarah Seymour, owner of London-based Love Absolute Skincare, a beauty products company, said its sales were being hit by people having “less money in their pockets”.

“Sometimes no money at all has come in,” she added. “The battle to survive for micro businesses like mine is real.”