Ukraine, supply chains and the end of globalisation 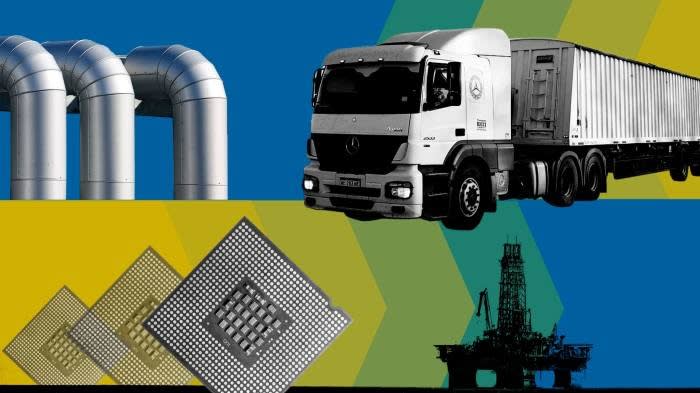 One thing to start: Bonuses, net zero and war: don’t miss our guide to what to expect in 2022 AGM season. Meanwhile conservative activists have lodged a record number of shareholder proposals at US annual meetings this year, setting up a highly politicised proxy season.

Welcome to FT Asset Management, our weekly newsletter on the movers and shakers behind a multitrillion-dollar global industry. This article is an on-site version of the newsletter. Sign up here to get it sent straight to your inbox every Monday.

Does the format, content and tone work for you? Let me know: [email protected]

Big investors including BlackRock, Oaktree Capital Management and Allianz Global Investors are betting that the war in Ukraine will prompt companies to pull production closer to home in a significant reshaping of global supply chains.

For decades, broad investment themes have gelled around the idea that cheap offshore manufacturing and slick global supply chains can hold down costs for companies and foster low inflation. But this has reached an inflection point.

“The Russian invasion of Ukraine has put an end to the globalisation we have experienced over the last three decades,” Larry Fink, chief executive of BlackRock, the world’s largest asset manager, wrote in his annual letter to shareholders this week. “A large-scale reorientation of supply chains will inherently be inflationary,” he added.

“The Ukraine war is part of a pattern of supply chain disruptions getting more frequent and more severe,” said Dan Swan, co-lead of McKinsey’s operations practice, pointing to the trade war between the US and China, the blockage of the Suez Canal last year, and the pandemic. All of these have focused attention on supply chain sovereignty and domestic production facilities.

Notably the Ukraine war has highlighted the dangers of Europe’s dependence on Russian energy exports, and surging demand for chips during the pandemic exposed how the US and Europe’s share of global semiconductor production had decreased dramatically.

So what does all of this mean for investors?

“We need to learn to invest again in an inflationary environment. It’s injecting dispersion into asset prices, compressing multiples and putting pressure on corporate profits. It can only be overcome by asset managers positioning themselves to take advantage of these mega trends: energy transition, cyber security and digitalisation. It’s going to be a much trickier environment for investors.”

Monica Defend, head of the Amundi Institute says it opens up opportunities in sectors like energy and defence sectors where there is a need to pursue “strategic autonomy,” while Virginie Maisonneuve, global CIO equity at AllianzGI, said the shift would drive innovation, for instance in linking renewable energy with artificial intelligence to enhance efficiency. She added:

“While on the surface it looks like it’s very inflationary, it’s sector by sector and you have to look at it with the overall costs and the policies that go with them, which will include fiscal policies or special advantageous policies.”

Is it a case of Blackstone envy?

The biggest traditional asset managers are racing to bulk up their offerings of alternative products, including hedge funds, private credit, infrastructure and private equity.

More than a dozen groups known for their mutual and exchange traded funds each reported managing at least $100bn in alternative assets at the end of last year, up from nine groups five years ago.

Invesco, Franklin Templeton, Pimco and the like told my colleague Brooke Masters in New York that they are responding to demand from institutional and wealthy retail clients who want the higher returns that private markets can provide and are willing to lock up their money for longer periods.

The offerings also do wonders for the bottom line: recent research from Boston Consulting Group points out that the $15tn in alternatives accounted for 15 per cent of total assets under management, but 42 per cent of the industry’s revenue. That is expected to rise to 46 per cent of revenue by 2025.

Adding alternatives is also a way to boost revenue at a time when other fees are falling and mutual funds cannot assume that new money will boost management fees. Net flows to US long-term mutual funds have been negative for seven of the past eight years, according to the Investment Company Institute. Some of that money has gone into exchange traded funds that do much the same thing, but they tend to carry lower fees.

The fund managers are also defending their traditional turf from the private equity giants. Blackstone’s new wealth management products — such as the Breit and Bcred funds — have struck a chord with rich retail investors and the fund houses want in on the game.

Investors are demanding less compensation to take on the risk of lending to junk-rated energy companies as commodity prices surge and industry executives eschew the drill-at-all costs mentality that sparked a crisis eight years ago, writes Joe Rennison in New York. The additional borrowing costs investors require to hold the debt of lowly rated energy companies over US government bonds has fallen from above 4 percentage points in March to 3.65 percentage points last week, according to an Ice Data Services index that tracks trading activity in the US debt market. The decline has pulled the “spread” on junk-rated energy bonds below that of the broader high-yield market — something that has not occurred on a sustained basis since the US energy industry crisis that began in 2014.

A glut of supply caused by a surge in production among US shale drillers and weakening demand prompted by slowing Chinese economic growth sent oil prices collapsing between mid-2014 and early 2016. The oil price plunge set off a wave of defaults among US energy exploration and production companies, many of which financed their drilling through borrowing in the junk bond market. “Company behaviour has changed,” said Ken Monaghan, a high-yield portfolio manager at Amundi US. “Energy companies are paying down debt instead of following the ‘drill baby drill’ mantra.”

Warren Buffett has ended a six-year dealmaking drought with the $12bn purchase of insurer-to-toy manufacturer Alleghany and a $8bn stake in Occidental Petroleum. The 91-year-old Berkshire Hathaway boss’s deal drought had unnerved investors.

French bank Natixis has completed a long-delayed deal to cut ties with scandal-plagued subsidiary H2O Asset Management, after regulators pressed it to change the transaction so that H2O’s co-founders were not given a bigger share.

Edward “Ned” Johnson, who led Fidelity Investments for nearly 40 year and transformed the Boston-based group from a regional family firm into a $5tn behemoth, died on Thursday at the age of 91.

International investors are bracing themselves for a wave of defaults on the roughly $490bn of debt Russia owes to foreigners, across bonds, loans, direct investments and trade credits. Just how much of that exposure will be wiped out is the thorny question for investors.

But some investors, including distressed debt specialists Aurelius, GoldenTree and Silver Point, are seeking out opportunities in the wreckage, snapping up beaten-down Russian and Ukrainian bonds after the war sent many traditional investors racing out of the markets.

“We are moving to a bipolar world with much more segmented capital markets,” one investor told US Lex editor Sujeet Indap, whose column explores how private equity firms face a more fractured landscape after the invasion of Ukraine.

Janus Henderson, which is under pressure from Nelson Peltz’s activist Trian Partners, announced Ali Dibadj as its new chief executive to replace Dick Weil, who will retire this month. Dibadj joins from AllianceBernstein, where he was chief financial officer.

The bond market is buckling to the inevitability of rate rises, writes markets editor Katie Martin. March is shaping up to be the worst month for US Treasuries since at least 2016.

And lastly, our scoop of the week: Archegos Capital Management quietly amassed a stake in Deutsche Bank after its founder Bill Hwang forged ties with the German lender’s leaders before the family office imploded last year.

This free exhibition at the National Archives in Richmond promises to transport you into the world of 1920s Britain and experience what life was really like, beyond the ‘Roaring Twenties.’ Visitors will find a diverse collection of documents and stories drawing on everything from international peace treaties and textile samples to lonely hearts adverts. They’ll also have the opportunity to step into a recreation of a nightclub — the infamous 43 Club in Soho — with all the grit, glamour and associated sights and sounds.

Thanks for reading. If you have friends or colleagues who might enjoy this newsletter, please forward it to them. Sign up here

We would love to hear your feedback and comments about this newsletter. Email me at [email protected]