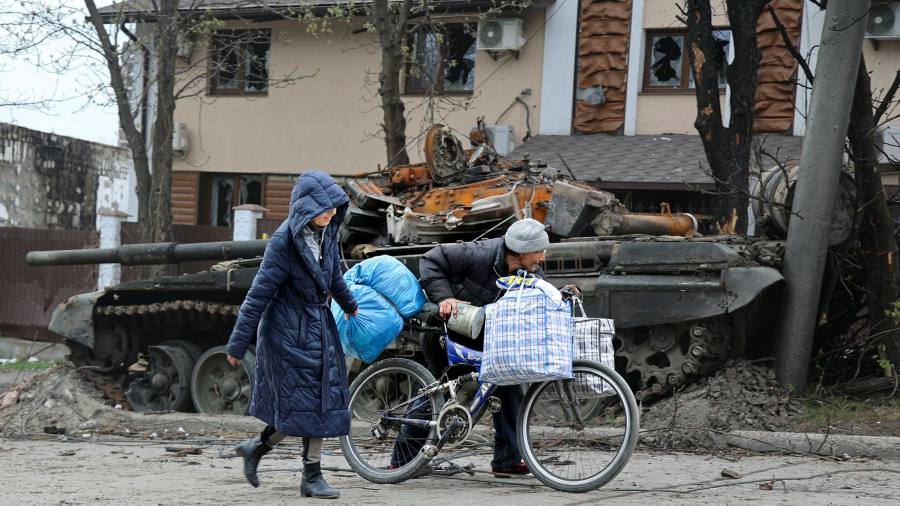 Ukraine said it planned to open a humanitarian corridor for civilians to leave Mariupol, the besieged south-eastern city where Russia this week began a bombing campaign targeting the city’s Azovstal steelworks.

The government had secured agreement on a corridor to bring civilians out of the city from 2pm, Iryna Vereshchuk, Ukraine’s deputy prime minister, said on Wednesday.

Separately, Russia said it sent Ukraine a draft document outlining its demands for a potential peace treaty to end president Vladimir Putin’s invasion, but it continued to cast doubt on the chances of resolution.

Dmitry Peskov, Putin’s spokesman, said Moscow had presented Kyiv with a “clearly worded and thorough draft document” in reply to a draft communique Ukraine sent in late March but signalled that little progress had been made in the talks. “The ball is in their court,” Peskov said on Wednesday. “We are waiting for a response.”

Vereshchuk said the situation in Mariupol was “catastrophic”. Writing on the Telegram social media platform, she said: “We managed to agree in advance on a humanitarian corridor for women, children and the elderly.”

She said that changes might occur on the path of the corridor “due to the very difficult security situation”.

Several attempts to evacuate civilians from Mariupol have collapsed because of mistrust between the warring sides since Russian troops encircled and bombarded the city and cut off power, water, heat and other basic services in early March. It was not immediately clear whether the corridor announced by Vereshchuk had Russian support.

According to Ukrainian officials, Russia has begun using bunker-busting bombs on and near the grounds of the Azovstal steelworks, the last area of the city under Ukrainian military control. They have said that civilians, including children, are hiding from the bombing alongside the fighters in shelters beneath the sprawling complex, which is one of Europe’s largest steelworks.

Ukraine’s military said in an update on combat operations on Wednesday that the Russians’ main efforts were “focused on capturing the city of Mariupol, continuing the assault in the area of the Azovstal plant”.

Serhiy Volyna, commander of Ukraine’s 36th marine brigade in Mariupol, who are among the last Ukrainian troops in the city, released a video on Tuesday in which he pleaded for international action to “save Mariupol”. He included the hashtags #PopeActNow and #KidsOfCatacombs.

Ukrainian military claims have not been independently verified.

Though the two sides said they would exchange draft peace proposals in March at a meeting in Istanbul, the talks began to falter shortly afterward when Ukraine accused Russia of committing war crimes, including slaughtering hundreds of civilians, in towns it controlled before it withdrew its forces.

Since then, Russia has attempted to shift blame onto Ukraine for the lack of progress in the talks.

Maria Zakharova, Russia’s foreign ministry spokesperson, said Ukraine had turned the talks into a “circus” and accused Kyiv of changing its position as a “distraction”.

“This isn’t ‘trust but verify’; this is just ‘verify’, because we haven’t trusted these people for a long time,” Zakharova in a radio interview on Wednesday. “And of course, the main situation is developing on the ground.”

Ukraine doubts Putin is sincere about wanting peace. Officials fear he has ordered his army to deliver a decisive victory in the Donbas region in time for the annual Victory Day parade in Red Square on May 9.