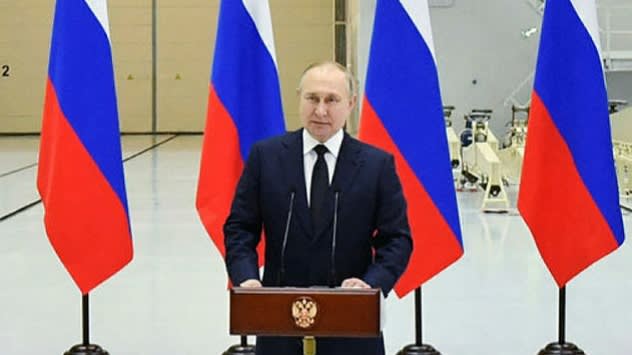 President Vladimir Putin has said that peace talks with Ukraine were at a “dead end” as the Russian leader claimed that Kyiv had deviated from agreements struck in Istanbul.

“We reached a certain level of agreements in Istanbul, which stated that security guarantees for Ukraine . . . would not spread to Crimea, Sevastopol and Donbas,” Putin said on Tuesday, speaking publicly about Russia’s military activity after a prolonged silence on the issue.

“We acted to create conditions to continue talks,” he added. “Instead, we faced the provocation in Bucha and, what’s most important, the Ukrainian side deviated from the Istanbul agreements.”

Now, “the security demands are one thing, and issues of regulating relations on Crimea, Sevastopol and Donbas are taken outside of those agreements”, Putin said. “So we are back to the dead-end situation.”

Ukraine’s “inconsistency” on critical issues made it difficult to achieve a final agreement, he claimed. “And until we see that, the operation will continue to its complete end.”

Putin called a civilian massacre in Bucha, a town near Kyiv, a “provocation” against Moscow. He said allegations that people died at the hands of Russian soldiers were “fake news” from the US. Ukraine meanwhile has said Russia was responsible.

The Russian president added that his military operation in Ukraine was going according to plan.

“Our task is to achieve the set goals while minimising losses. And we will move rhythmically, calmly, according to plan, which was initially proposed by the general staff,” the Russian president said.

The activity in Ukraine “was only aimed at immobilising forces, attacking and destroying military infrastructure”, he added.

The latest figures from the UN Human Rights office show more than 1,800 civilians have been killed and almost 2,500 injured since the conflict began in February.

Late on Tuesday, Ukraine’s president Volodymyr Zelensky revealed that Viktor Medvedchuk, a pro-Russian oligarch-politician and close friend of Putin, had been detained after fleeing house arrest during Russia’s full-blown invasion of the country.

“A special operation was carried out thanks to the SBU [state security service],” Zelensky wrote in a Telegram post.

The post included a photograph of Medvedchuk sitting in a chair wearing a Ukrainian army camouflage uniform with his hands cuffed.