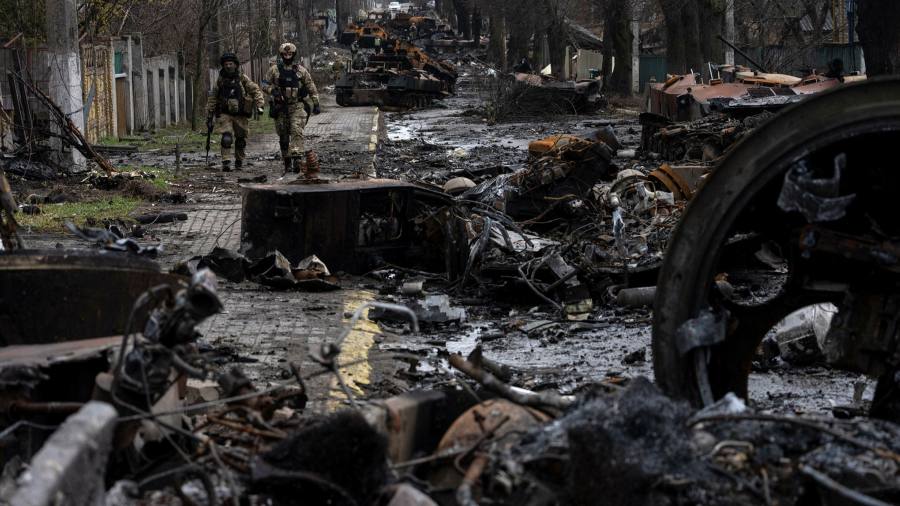 Volodymyr Zelensky has accused Russia of war crimes after reports of atrocities and mass graves near Kyiv were widely condemned by western governments, prompting the EU to prepare more sanctions on Moscow over its invasion of Ukraine.

The Ukrainian president said Russian forces had committed atrocities in Bucha, a city about 25km north-west of Kyiv, and other areas that were until recently under Russian occupation as his country’s forces said they had captured more territory near the capital.

“The world has already seen many war crimes. At different times. On different continents. But it is time to do everything possible to make the war crimes of the Russian military the last manifestation of such evil on earth,” he said in a video address on Sunday, adding that actions would be considered by the UN Security Council at a meeting on Tuesday.

Iryna Venedyktova, Ukraine’s prosecutor-general, said 410 bodies of civilians had been recovered from the Kyiv region.

Images of charred corpses and reports of mass graves have prompted the EU to prepare more sanctions against Russia, with European Council president Charles Michel saying new measures were “on their way” following the Russian retreat from Bucha.

The Ukrainian army said it had retaken more territory from Russian forces, reclaiming a village near Chernihiv, about 150km north-east of the capital, and Pripyat outside the Chernobyl nuclear reactor, about 150km north-west of Kyiv.

But the military warned that Russia would continue to attack critical infrastructure, particularly in the besieged port city of Mariupol, and in Odesa, which was targeted at the weekend.

US officials and leaders from across the EU condemned the reports from Bucha and other areas near the capital, with Richard Moore, head of the UK intelligence service MI6, saying “we knew Putin’s invasion plans included summary executions by his military and intelligence services”.

China, which has refused to condemn Russia’s invasion of Ukraine, offered a muted response on Monday. State media did not mention the alleged killings, and posts on Chinese social media by prominent bloggers questioned the veracity of the reports.

Russia’s ministry of defence denied the accusations, saying they were a “provocation” designed by Ukraine for western media.

Zelensky vowed that a “mechanism of justice” would be formed by the foreign affairs ministry, the prosecutor-general’s office and other branches of government to help “bring to concrete justice those who unleashed or in any way participated in . . . crimes against our people”.

Zelensky also criticised former western leaders who were slow to react to Vladimir Putin’s aggression and had offered too many concessions to the Russian president for more than a decade. “More conclusions are needed. Not only about Russia, but also about the political behaviour that actually allowed this evil to come to our land,” he said.