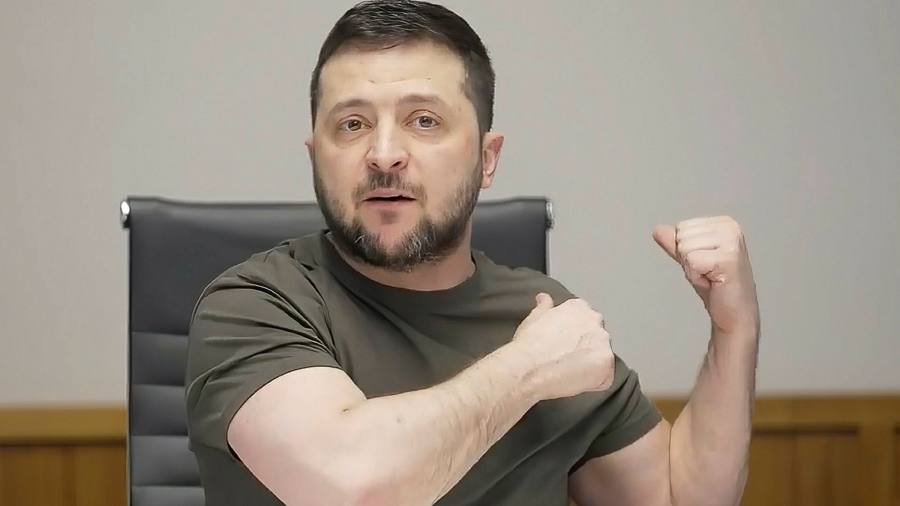 Ukraine is ready to declare neutrality, abandon its drive to join Nato and vow to not develop nuclear weapons if Russia withdraws troops and Kyiv receives security guarantees, President Volodymyr Zelensky said ahead of peace talks in Turkey this week.

Speaking in Russian, Zelensky told a group of Russian independent journalists on Sunday that Kyiv was prepared to meet Moscow on some of its demands on the condition that the changes were put to a referendum and third parties promised to protect Ukraine.

“Security guarantees and neutrality, the non-nuclear status of our state — we’re ready to do that. That’s the most important point [ . . . ] they started the war because of it,” Zelensky said.

Russia’s media censor ordered the four reporters not to publish the interview and vowed to investigate them — even though it had already blocked a site that one of them edits and shut down a TV station formerly run by another.

His remarks came as Russian forces continued to assault strategic locations over the weekend, while regrouping around the capital Kyiv and continuing a street-by-street advance on the devastated port of Mariupol. Referring to merciless tactics employed by Russia in Syria, Jean-Yves Le Drian, French foreign minister, compared Mariupol with “a second Aleppo”.

Russian President Vladimir Putin’s invasion has yet to take a major Ukrainian city and has been beset by poor planning, low morale and supply problems. In an update on Monday, Ukraine’s military claimed it had repelled Russian attempts to “break the defence” of Kyiv from the north-west and east. A UK intelligence update said Russia had made “no significant” advances since Sunday but had “gained most ground” in Mariupol.

Over the weekend, Russia also stepped up its missile attacks on fuel and food depots, hitting Lviv, close to the Polish border, as well as Lutsk, Zhytomyr and Rivne in the west and Kharkiv in the east. Around 30 separate strikes were reported on the Kyiv region over the past day.

Zelensky said Ukraine’s main goal was to end the war as quickly as possible and make Russia’s forces withdraw to the positions they held before Putin ordered the invasion on February 24.

Zelensky said he was “99.9 per cent sure” the Russian president had thought Ukraine would be waiting for the invasion with “flowers and smiles” — going so far as to send troops with parade dress for a victory celebration in Kyiv apparently planned for the third or fourth day of the war.

But Zelensky said Ukraine was prepared to hold separate discussions on the Crimean peninsula, which Russia annexed in 2014, and the eastern Donbas border region, where more than 14,000 people have died in a slow-burning separatist conflict involving Russian proxies that broke out soon afterwards.

“I understand it’s not possible to make Russia completely leave the territory — that’ll lead to world war three,” Zelensky said. “That’s why I’m saying this is a compromise. Go back to where this all started and then we’ll try to solve the difficult Donbas issue.”

Kyrylo Budanov, Ukraine’s head of military intelligence, claimed on Sunday that Russia was seeking to split his country in two, creating a statelet made up of territory under Russian control in the east and south. “This is an attempt to create North and South Korea in Ukraine,” Budanov said.

Delegations from Ukraine and Russia are set to meet this week in Ankara for three days of talks aimed at ending Putin’s month-long invasion.

But Zelensky played down comments by Recep Tayyip Erdogan, Turkey’s president, that Ukraine and Russia were close to a deal on four points. He said peace could only be achieved through a meeting with Putin.

In exchange for giving up its desire to join Nato — an aspiration reflected in Ukraine’s constitution — Kyiv wants an agreement that resembles Nato’s Article 5 in requiring the country’s protectors to come to its aid if it is attacked.

Zelensky said he wanted to put the decision to a referendum, which he said would take “several months”, before embarking on constitutional changes that would require at least a year of work.

Ukraine and its western backers fear Russia may be using the talks as a smokescreen while it builds up battle groups near the border and prepares for a new offensive.

Zelensky said Ukraine was prepared to consider giving the Russian language protected minority status if it received analogous guarantees from Moscow for Ukrainian.

But he said Putin had done “irreparable damage” to the Russian language in Ukraine through brutal assaults on mainly Russian-speaking cities, such as Mariupol.

“These Russian-speaking cities are the ones that have been wiped from the face of the earth. And these families,” Zelensky said.

He said 90 per cent of the buildings in Mariupol, which previously had a population of 400,000, had been destroyed, “but they were at least multistorey, so you can imagine what was there”. Smaller towns had been completely razed.

“I don’t know who else the Russian army ever treated like this,” the president said, adding that the destruction was worse than during Moscow’s two campaigns in Chechnya in the 1990s and 2000s.