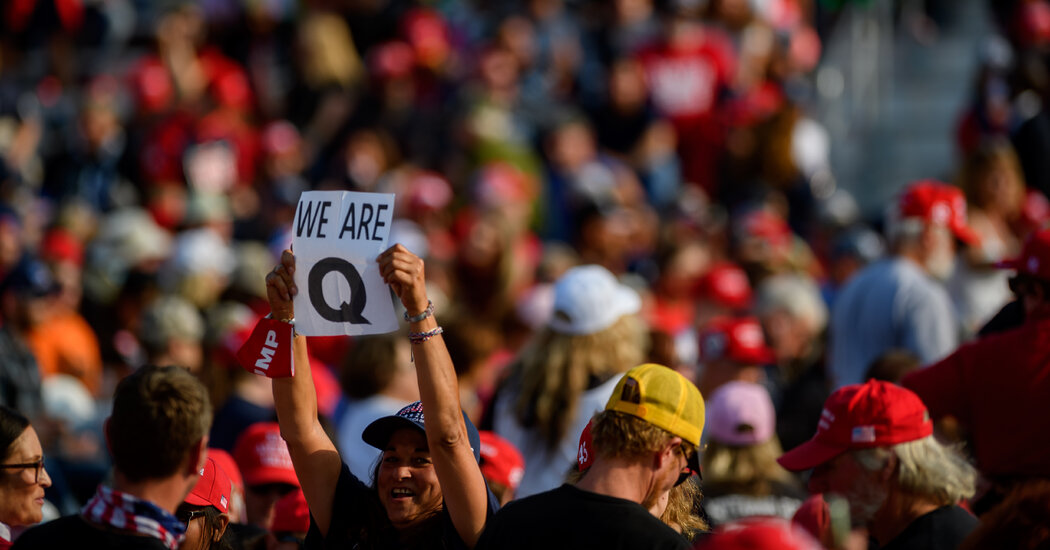 Greetings from your co-host Leah Askarinam. Blake Hounshell is off this week. We have an item tonight from our colleague Jazmine Ulloa, who reports on a new analysis of young Latinos’ media habits.

It came in the form of videos, tweets and WhatsApp messages, YouTube videos and the rants of Spanish-language radio hosts. It included false reports of widespread violence on the streets of Democratic cities after the murder of George Floyd, QAnon conspiracy theories, and overblown claims of terrorists and criminals crossing the U.S.-Mexico border.

As the most egregious material spread online — and in the private text chains of young Latinos’ tías and tíos — organizers with United We Dream Action, an immigrant rights organization founded and led by young immigrants, jumped into the fray. The group trained members to provide accurate information to their families and friends and create shareable content across social media platforms that was meant to dispel anti-immigrant and anti-Black narratives.

Now, with the 2022 midterms months away and both parties scrambling for the votes of one of the most crucial swing groups in American politics, the organization released a report today that more deeply explores Latinos’ online engagement with material about immigration. Long exploited by bad actors on the web, the contentious issue is widely expected to be pivotal in elections across the country.

The immigrant advocacy network teamed up with Harmony Labs, a nonprofit research group in New York, to study the television and online consumption habits of more than 20,000 Latinos nationwide who agreed to share their data from Jan. 1 to Aug. 31, 2021. Latinos over 36 were more likely to encounter polarizing anti-immigrant narratives than other cohorts, the analysis found, mainly through right-wing news sites, television and YouTube.

It also found an interesting gender divide among younger Latinos.

Latinas ages 18 to 35 drew from a much wider variety of news and entertainment sources than their older counterparts, the analysis found, and were more likely to seek out stories not just about immigration policy but also about immigrants and the immigrant experience.

Their search queries and content consumption were curious and community-driven, reflecting “a desire to understand and engage with the people and world around them,” according to the findings.

But Latino men in the same age cohort were far different. Those surveyed tended to inhabit “a very insular, virtual world,” the researchers said. Many young Latino men spent much of their time online engaging with anime and fantasy gaming, and did not absorb much media about immigration or immigrants at all, either positive or negative. When they did consume immigration content, it tended to be about policy and stemmed from conservative-leaning sources.

Beyond that, their news consumption choices tended to be more individualistic and entrepreneurial. Of 45,000 articles read by Latinos in the first nine months of 2021, only two topics appeared to grab the attention of large numbers of young Latino men: the amateurs who drove up the stock price of GameStop, and Covid-related school closures.

Both young Latinos and Latinas demonstrated less interest in politics, and for the young men, the top “political” personalities were influencers who discuss a broad variety of cultural topics and fall across the political spectrum: Philip DeFranco, Joe Rogan and Mr. Beast.

The vacuum of political information for young Latino men, coupled with their desire for economic stability and penchant for individualism, is likely to leave that group more susceptible to right-wing anti-immigrant narratives and disinformation in the future, the groups concluded.

This uniquely positions young Latino men for negative arguments “that there isn’t enough for them and that someone else is taking their opportunities,” said Juanita Monsalve, the senior marketing and creative director for United We Dream Action. But it also creates an opportunity to intervene with counter-messaging, she added.

“We have this research to figure out how to create culturally responsive content and show up in the spaces where they want to consume it,” Monsalve said.

The report’s findings track with previous research on Latinos’ political leanings — and they add to the picture that is emerging of how these voters are newly up for grabs.

Latinos in general tend to lean Democratic, but in 2020, Donald Trump improved his performance among these voters in some parts of the country, and with working-class Latino men in particular, by centering his messaging on the economy.

Young Latinas are likely to be more liberal than their male peers, and are more worried about social justice and equity issues like racism, immigration and climate change.

More young Latino men voted for Trump in 2020 than they did in 2016, but whether Republicans will continue to build support among the demographic “is an open question,” said Vladimir Enrique Medenica, an assistant professor at the University of Delaware and director of survey research at the University of Chicago’s GenForward project, which surveys voters ages 18-36.

What is known, he said, is that many have no interest in politics, or they identify as independent or do not have an affiliation to either major political party. This is partly because many feel alienated from politics and unrepresented by either party.

Many also face greater barriers to college education and economic opportunities, both of which help shape people’s political views and can be particularly important to the process of politicization for second-generation Latinos, whose parents immigrated to the United States and who may not have developed a strong attachment to either Democrats or Republicans, Medenica said.

As an example, she pointed to an ad released last month by Gov. Ron DeSantis of Florida with the U.F.C. fighter Jorge Masvidal, who is of Cuban and Peruvian descent.

To counter any political messages this election cycle meant to sow racism, division or voter confusion, Mercado’s group has been relying on “promotoras de la verdad,” Latina organizers who serve as “truth warriors” and have been canvassing homes to combat misinformation on issues including the coronavirus, vaccines, Florida’s recently passed law restricting classroom discussion about sexual orientation and gender identity, and the upcoming midterms.

“Latina women are organizing to take back the narrative and the disinformation poisoning our community,” Mercado said. But they cannot do it alone, she added.

David McCormick had been trying to pitch himself to Pennsylvania voters as the Republican most aligned with Donald Trump in his Senate primary.

So what will he do now that Trump has endorsed his top rival, Mehmet Oz?

“There is no pivot,” said Jim Schultz, an informal adviser to McCormick’s campaign who was previously a lawyer for the Trump White House.

After the Trump endorsement, McCormick’s campaign unleashed what it said was a six-figure ad buy for a new commercial, showing Oz praising Hillary Clinton and Anthony Fauci and dancing with Michelle Obama. The ad labels Oz as “Pro China,” “Pro Transgender Children” and “Anti Gun.”

The competition for Trump’s blessing had been fierce, with McCormick trying to make the case that Oz’s Turkish background was a weakness. Dina Powell McCormick, the wife of McCormick and a former Trump White House official, is said to have told Trump that Oz’s Muslim faith would be a political liability in parts of Pennsylvania.

But McCormick and his allies are now treading lightly, showing respect to Trump while taking aim at the very candidate he endorsed.

“President Trump’s endorsement certainly is a big deal,” McCormick said in a radio interview on Monday. “But I think the really big deal is that Mehmet isn’t a conservative and not an America First conservative.”

The conservative blowback to Trump’s endorsement of Oz, the former star of “The Dr. Oz Show,” was immediate.

Sean Parnell, the original candidate endorsed by Trump, who dropped out of the race after accusations of abuse, also criticized the decision, tweeting that Oz was “the farthest thing from America First and he’d be very bad for PA.”

McCormick’s campaign trotted out its own attempt at a big-name endorsement: Rick Santorum, a former senator from the state whose conservative platform, and sweater vests, helped ingratiate him among conservative voters in the 2012 presidential race.

Is there anything you think we’re missing? Anything you want to see more of? We’d love to hear from you. Email us at [email protected].