Two More Republicans Back Jackson as Senate Moves Toward Confirmation 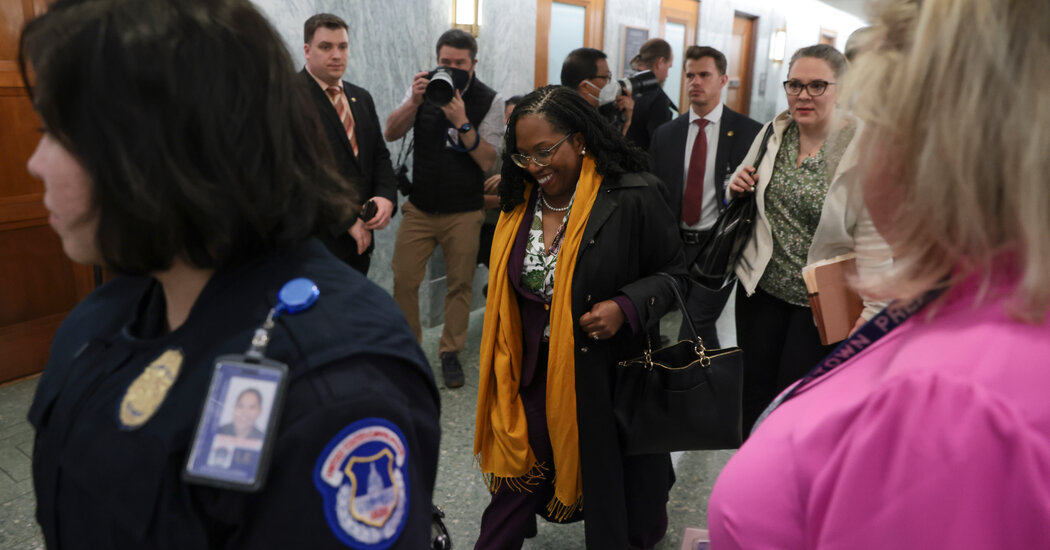 WASHINGTON — A nearly unified wall of G.O.P. opposition to Judge Ketanji Brown Jackson cracked slightly on Monday as two more Senate Republicans said they would side with Democrats in supporting her, paving the way for her confirmation as the first Black woman on the Supreme Court.

Senators Mitt Romney of Utah and Lisa Murkowski of Alaska joined a third Republican, Susan Collins of Maine, in lending their support to Judge Jackson, defying deep resistance in their party to the nominee. The G.O.P. opposition was underscored anew on Monday when all 11 Republicans on the Judiciary Committee voted against the nomination.

That prompted Democrats to use an unusual procedure to force the nomination out of the deadlocked panel with a vote of the full Senate, which agreed to the move by a vote of 53 to 47.

The three Republicans gave President Biden at least a modicum of the bipartisan backing he had hoped for ahead of a confirmation vote now expected as early as Thursday. And it was a counterpoint to the bitterly partisan debate over Judge Jackson, in which Republicans on the judiciary panel attacked her as a liberal partisan with a questionable record, glossing over her qualifications and experience in hearings that featured the airing of conservative grievances, accusations of leniency toward child sexual abusers and divisive questions, including how she would define the word “woman.”

In a statement announcing her support for Judge Jackson, Ms. Murkowski, who is not on the committee, said she was backing the nominee in part to reject “the corrosive politicization of the review process for Supreme Court nominees, which, on both sides of the aisle, is growing worse and more detached from reality by the year.”

She also praised the judge’s “qualifications, which no one questions; her demonstrated judicial independence; her demeanor and temperament; and the important perspective she would bring to the court” in replacing Justice Stephen G. Breyer.

Mr. Romney, in his statement, called Judge Jackson “a well-qualified jurist and a person of honor.”

Their support came after another contentious day in the Judiciary Committee, during which Republicans spent hours vehemently reiterating their opposition to her elevation. The N.A.A.C.P. called the resulting deadlock in the panel a “stain” on the committee, and Democrats moved immediately to force the nomination to the floor with a vote of the full Senate.

“We shouldn’t have to be taking this step, but we are moving forward all the same without delay despite Republicans opposing her in committee,” Senator Chuck Schumer, Democrat of New York and the majority leader, said before the vote.

In the Judiciary Committee meeting on Monday, Republicans rehashed the main attack lines against the judge that dominated a combative set of confirmation hearings last month, calling her a progressive activist who was soft on crime, while Democrats praised her qualifications and demeanor and said Mr. Biden’s nominee deserved to be confirmed.

“This is a historic moment for the committee and America,” said Senator Richard J. Durbin, Democrat of Illinois and the chairman of the panel.

While they did not dispute the import of Judge Jackson’s nomination nor her legal qualifications, committee Republicans continued to rail against her on a variety of fronts, even as some prominent conservatives called their criticisms baseless. They criticized the sentences she handed down in child sex abuse cases, her refusal to state a personal judicial philosophy, her past representation of terrorism detainees as a public defender and her deep support among progressive advocacy groups.

“This choice of Judge Jackson was really embraced by the most radical people in the Democratic movement to the exclusion of everyone else,” said Senator Lindsey Graham, Republican of South Carolina and a former supporter of Judge Jackson who has become a fierce opponent.

It was a mark of how bitterly divided the chamber has grown over approving Supreme Court nominees, once regarded by members of both parties as a matter of allowing the president his chosen candidate to serve on the court.

Though Republicans complained about past Democratic treatment of Supreme Court nominees named by Republicans, Monday’s meeting was far different from the one Democrats held when they considered the nomination of Clarence Thomas in 1991, when Mr. Biden led the panel. At the time, rather than uniting against him en masse, Democrats agreed to send his nomination to the floor without a recommendation, despite their deep misgivings amid allegations of sexual harassment against the nominee. On Monday, Republicans refused to take a similar step, citing their view that Judge Jackson was too liberal.

“We are supposed to be trained seals over here clapping when you nominated a liberal,” Mr. Graham said. “That’s not going to work.”

He warned that when Republicans next control the Senate, they would routinely deny Democratic judicial nominees they considered too liberal a hearing before the judiciary panel.

Republicans continued to question Judge Jackson’s credibility, citing her resistance to calls to outline her philosophical approach, with Senator John Cornyn, Republican of Texas, saying the response showed a lack of candor.

“Someone of her impressive caliber surely has a judicial philosophy, but maybe she just doesn’t want to talk about it,” Mr. Cornyn said.

In response, Senator Cory Booker, Democrat of New Jersey, accused Republicans of creating a caricature of Judge Jackson that is “so far out of the lines” of reality considering her deep credentials and experience. He said he had heard from people who asked: “How could they create these exaggerations? How could they disrespect a person like her, who has done everything right in her life and in her journey?”

Democrats defended Judge Jackson’s record, noting — in line with several independent analysts — that her sentencing history has fallen well within the mainstream of the federal judiciary, and accusing Republicans and conservative groups of distorting her record. They pointed to her strong support from law enforcement groups and said that many Trump administration nominees had issued similar sentences but were uniformly approved by the same Republicans lining up against Judge Jackson.

1. Her confirmation is nearly ensured. After a bruising set of confirmation hearings, Democrats are united behind Judge Jackson. The backing of Senator Joe Manchin III signaled that all 50 Senate Democrats would support her nomination, which Republicans would be unable to stop.

2. Republicans show deep — but not total — opposition. G.O.P. senators attacked Judge Jackson for her record and grilled her on a host of divisive issues during the contentious hearings. Senators Susan Collins, Mitt Romney and Lisa Murkowski said they would support the judge’s nomination.

3. The upcoming vote. All 11 Republicans on the Senate Judiciary Committee voted against Judge Jackson’s nomination, prompting Democrats to force the nomination out of the deadlocked panel with a vote of the full Senate. A confirmation vote is expected as early as April 7.

Democrats said the Republican assault was as much about the coming midterm elections as it was about Judge Jackson herself.

The support of the three Republicans undercut the assault by their colleagues.

In her statement, Ms. Murkowski said the judge’s backing “from law enforcement agencies around the country is significant and demonstrates the judge is one who brings balance to her decisions.”

Though some Republican members of the panel once contemplated boycotting the committee vote to erect a procedural roadblock to Judge Jackson, they quickly abandoned that tactic. But none would support moving the nomination out of committee to expedite her consideration on the floor.

Even as Republicans on the panel uniformly said they would oppose her, many offered her personal and professional praise.

Senator Ted Cruz, the Texas Republican who on Monday said that Judge Jackson would be the most extreme liberal ever to sit on the court, called her charming and talented.

“I’ve known her for 30 years and always liked her personally,” he said.

“I would not hesitate to retract my endorsement of Judge Jackson for the Supreme Court if there were anything at all to Senator Cruz’s statement, but there is not,” he wrote on Twitter. “In fact, quite the opposite is the case.”

Senator Amy Klobuchar, Democrat of Minnesota, said the Republican opposition was disappointing but not surprising. She said the strong response to Judge Jackson showed that the public was not persuaded by the Republican attacks.

“People watching knew exactly what was going on,” she said. “And they weren’t buying what they were selling.”

Republican opponents argued that their opposition was based on substance and not personal animus.

“This is not about the content of her character,” said Senator Thom Tillis, Republican of North Carolina. 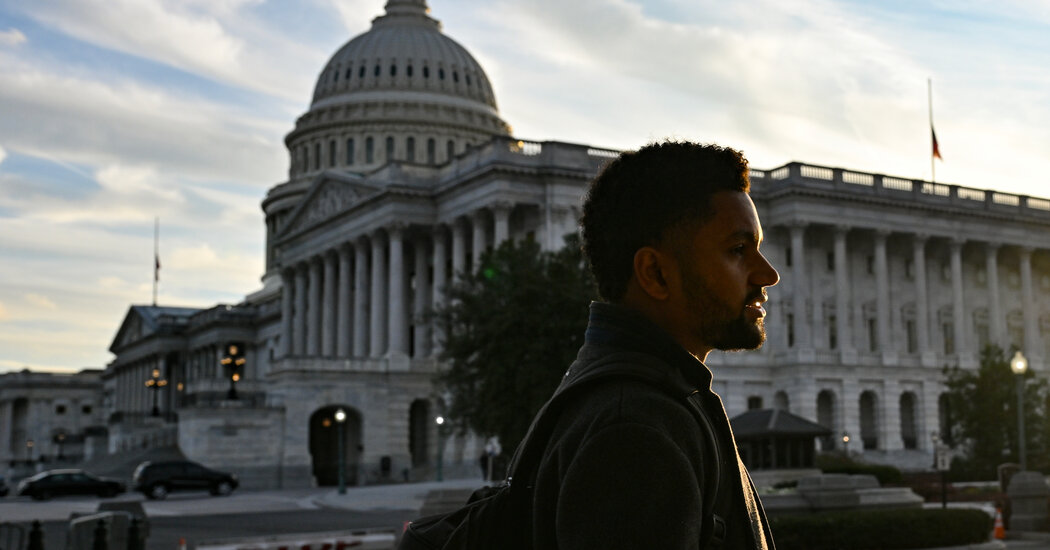