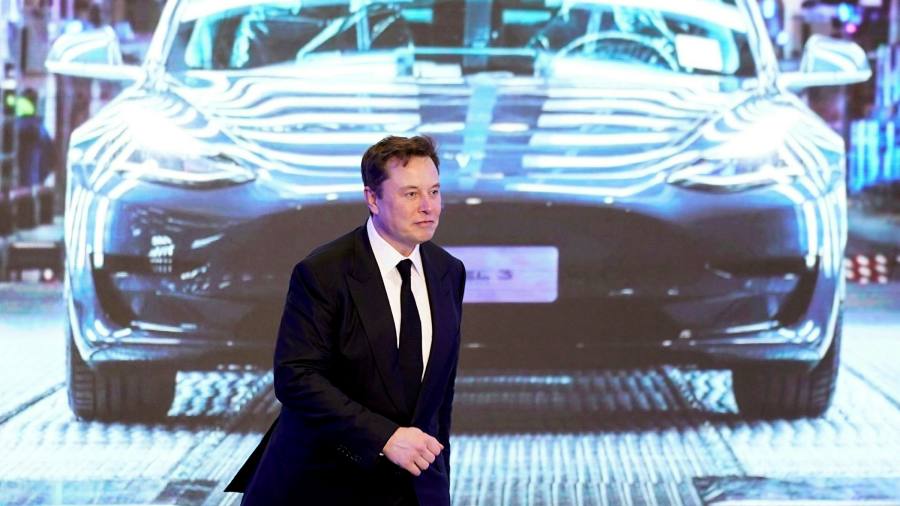 Here’s why “funding secured” is rising fast on Twitter’s trending list: Elon Musk has outlined how he might be able to pay for control of the microblogging website that has become his personal Moby Dick.

Musk’s filing also confirms (explicitly, rather than in annoyingly twee riddles) that he’s “exploring whether to commence a tender offer to acquire all of the outstanding shares”. A reminder that because Twitter has adopted a poison pill it’d be irrational for Musk to buy shares that are tendered, so for the moment the threat looks like a lobbying tool or possibly a chaos engine.

Nevertheless, revealing the funding package hours after blockbuster results from Tesla adds a wrinkle to the story. There’s an interconnectedness to Musk’s corporate universe that’s excited analysts including Morgan Stanley’s own Adam Jonas, who has written at length about the extrinsic value of “The Muskonomy”:

The margin loan to fund a Twitter bid requires a pledge of nearly 59mn Tesla shares, or about 85 per cent of Musk’s total stake. His remaining unpledged stock is worth about $25bn at current prices so if sold, and allowing for an overhang discount, there would be just enough to cover the cash component of the offer. It’s a big ask.

But such calculations ignore a big event looming in the Muskonomy: the final payout from Tesla’s 2018 bonus scheme. Musk’s last awards will unlock shortly, assuming board approval, and will carry a five-year selling lockup.

Each of the three tranches due Musk give him the right to buy 8.4mn Tesla shares at $70, a more than 90 per cent discount to the prevailing market level. So, based on a $1,061 share price at pixel time, Musk could buy Tesla stock worth more than $25bn for not much more than $1.5bn. Factor in those shares and the margin loan financing looks a bit less onerous.

Tesla’s forecast-shredding Q1 numbers overnight, and resultant 8 per cent share price rise, are therefore usefully timed. But are they everything they appear?

For a lively perspective, here’s Neil Campling. Mirabaud’s head of technology research has never been a fan of Tesla, which sets him apart from approximately half of the 54 sell-side analysts to publish on the stock.

Campling’s tearing down of the automaker’s forecast-busting Q1 numbers begins with a simple question: why were everyone’s margin estimates so wrong?

Tesla’s simplified explanation is that anywhere around 10% to 15% of their cost structure is exposed to raw materials. They have been experiencing increases in costs in general, and also on raw materials “for a number of quarters now” – as you’d expect (as everyone else has). That pace picked up in Q1 and will increase further in Q2. Their caveat is that, in some cases, “there are contracts with suppliers, and then as those contracts expire, we have to renegotiate them, so that there can be a lag. In some cases, our contracts do directly reflect movement in commodity prices or raw material prices, but the timing in which that Tesla pays for that has a lag associated with that as well, based on the contract.” Nothing rocket science in that – although actually it is a reminder that Tesla don’t hedge for these exposures/risks (hold that thought…). The CFO explains that “because it’s quite an unprecedented situation of raw material movement and all of these various lags and uncertainty around renegotiating contracts. They try and make sure all the prices and cost increases “align and the company can remain financially healthy”. So how can Tesla successfully navigate this when every other company on the planet can’t?

There’s an answer of sorts: Warp, Tesla’s in-house enterprise resource planning software. Warp replaced SAP as Tesla’s ERP system in 2012, having reportedly been built in under four months. It has since grown from a tool for production planning into a central megabrain for managing everything from the group’s e-commerce sales and customer service to over-the-air software updates.

This kind of “amazing, first-of-its-kind, best-of-breed” software might be worth billions if spun out yet Warp has never even merited a mention in a Tesla filing, says Campling. Drawing a parallel with Star Trek’s fictional physics, he “can’t help but wonder if there are more than one kind of Warp Drive that are science fiction and the stuff of dreams.”

We have rampant inflation everywhere. There are logistics issues, labour issues and component sourcing headaches the world over, hitting even the largest corporate company on the planet (Apple). And yet Tesla has net profits up 50% QoQ on flat volumes and increased costs. But, despite the higher input costs, and no volume uplift somehow, they manage to reduce COGS. GAAP auto gross-margins reached 32.9% and, for the first time, exceeded 30%. (And this is even more remarkable given it is based on delivering cars with pricing set at lower ASPs from previous quarters). Tesla has said factories are likely to continue to run below capacity through the rest of 2022. You’d have thought that would negatively impact their margins. The Shanghai factory’s manufacturing and operations director told state-run media this week that the plant only has enough inventory for one week’s production. Let’s just remember – Tesla is seeing record delivering, record gross margins, record profit margins, record output, record profitability. Amazing.

Some might call it incredible. But then, what is there about the Muskonomy that isn’t?

Note: the maths in paragraph seven were fixed post publication.