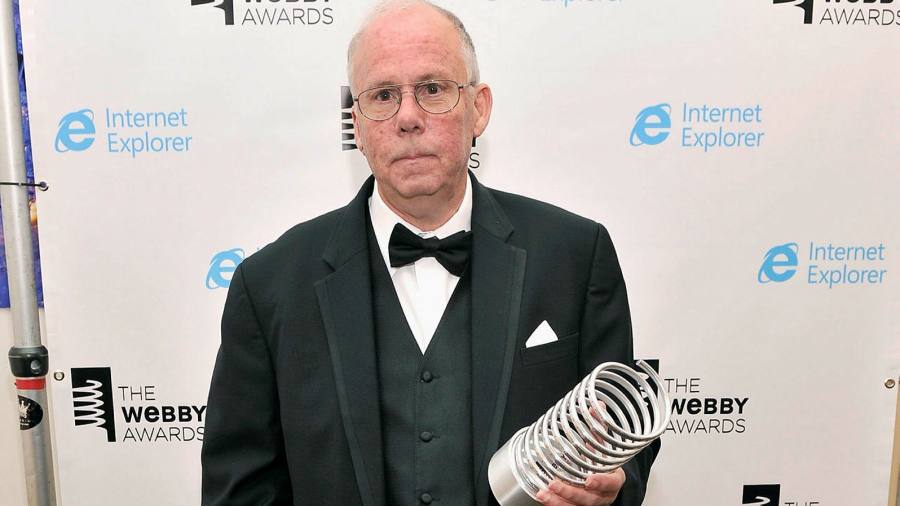 In the long-simmering conflict between Russia and Ukraine, one of the oddest chapters came in May 2017, when a diplomatic spat took a digital twist. An argument over the nationality of an 11th-century queen consort of France erupted on Twitter, where the official account of Ukraine deployed an unusual tool of international relations against its opposite number in Russia: the gif.

The back-and-forth between @Russia and @Ukraine, which used clips from TV shows The Simpsons and Sherlock to illustrate its taunts, underlined just how far the humble gif had come since it was created in a lab in Ohio 30 years earlier.

Steve Wilhite, who has died aged 74, was the computer scientist behind this quintessential digital ephemera that has changed how the world reacts, ridicules and bonds online, enabling instant connections that transcend languages and borders.

His invention of the gif file format while working for CompuServe in 1987 predated that of Tim Berners-Lee’s world wide web. Within their lifetimes, both men would see their creations turn into enduring phenomena touching billions of people — and both would largely miss out on the fortunes that others made thanks to their technology.

Stephen Earl Wilhite was born in West Chester Ohio in 1948. His father, Clarence, worked in a factory and his mother, Anna, was a nurse. He began working for CompuServe, an internet service provider based in Ohio that was one of the earliest ways Americans could get online. Wilhite’s team there was trying to solve a problem familiar to millions of dial-up customers: speeding up loading times and reducing storage space so that colourful digital images could be shared on CompuServe’s online forums and chat services.

His wife, Kathaleen, told an interviewer that Wilhite developed his invention at home “and brought it into work after he perfected it”. “I saw the format I wanted in my head and then I started programming,” Wilhite told the New York Times in 2013. To create the Graphics Interchange Format, he used compression technology to reduce the resolution of an image to eight bits per pixel and a maximum of 256 colours. His first gif showed a plane appearing to fly through the clouds, creating the endless loop that is now a hallmark of the format.

In 2013, he was presented with a Webby “Lifetime Achievement” award by David Karp, founder of Tumblr, the social media site. “These moving pictures make us smile, make us cringe, they make us think feel and remember, and we have Steve to thank for that,” Karp said at the ceremony.

Wilhite’s acceptance speech was delivered in gif form, after a stroke at age 51 impaired his speech and contributed to an early retirement. “It’s pronounced ‘jif’ not ‘gif’,” he said, although that emphatic ruling has failed to end debate on the matter.

By then the gif’s place in internet history was secured but its ascent was uneven. Through the 1990s, early web pages were adorned with gaudy gifs, from flashing “under construction” signs and fake visitor counters to dancing babies and bananas. Attempts to charge royalties for use of the patented technology behind the gif brought protests from web developers and led to rival formats, such as PNG. By the early 2000s, the gif was at risk of disappearing along with the dotcom bubble.

The patent expired in the early 2000s just as a new kind of website, the social network, began to take off. Web 2.0 sites such as MySpace and Tumblr, often tinged with nostalgia for the early internet, reinvigorated the format.

“The reason the gif has remained such an important part of our digital lives is it has been repurposed and reused in so many cultural contexts over 40 years,” says Kate Miltner, a researcher at the University of Edinburgh. “Unlike a static image or even an emoji, it allows us to communicate very specific types of emotion or feeling, or even just a particular circumstance, almost instantaneously,” says Miltner, author of a 2017 paper on the cultural significance of the format: ‘Never Gonna GIF You Up’.

Fans of reality TV or music videos converted their favourite moments into gifs to serve as rapid reactions — a digital eyeroll or a high five that could imbue tone missing from plain text. The emergence of gif search engines such as Giphy and Tenor, which were themselves later integrated into platforms such as Instagram, Twitter and even smartphone operating systems, made the format easier to access for billions of people.

After Wilhite’s death, well-wishers posted gifs of candles to his online tribute page. “This man inadvertently shaped the internet, and is the godfather of all the memes on it,” wrote one. A former CompuServe co-worker added: “Steve was always coming up with new and better ways of doing things. He will be remembered as a true visionary and a pioneer of online computing.”